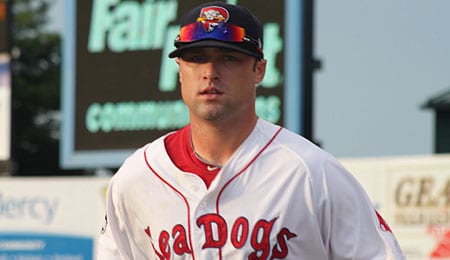 When he’s not shooting himself, Bryce Brentz is a pretty nice prospect.

After Boston Red Sox outfield prospect Bryce Brentz went yard Sunday for his second dinger in five games, third in nine contests and ninth overall this season, we realized it was high time to shine the prospect glare on him.

He got off to a slow start this season, missing most of big league training camp because – get ready for this – he shot himself.

While that mishap might make some question his smarts, there’s no denying he’s bounced back nicely and is enjoying a very fine first full season at Triple-A, which puts him squarely on a collision course with Fenway Park very, very soon.

Jacoby Ellsbury is almost certainly done as a Red Sox after this year, and the three-headed beast in left field of Jonny Gomes, Daniel Nava and Mike Carp is hardly a roadblock. Obviously, Jackie Bradley Jr. must fit in at centrefield, but there’s room for Brentz if he continues to impress.

Brentz is doing a better job of drawing walks this season, as you can see in the video below.

A mini slump (2-for-10) this weekend has dropped Brentz to .275, but we love the extra base pop (10 doubles and one triple to go along with his nine homers). His OBP is headed in the wrong direction, but that’s to be expected because even though he’s walking more often, his BA will likely continue to slide as he moves up – don’t expect Brentz to be much more than a .250ish big league hitter (with nice power and production).

A 2010 sandwich pick, Brentz has arrived as one of the Red Sox top prospects, but even though he’s making much better contact this year, it’s still a weakness in his game (136 strikeouts in 127 games last year; 44 in 44 games this season).

Brentz was a pretty good two-way player, and the Indians originally took him in the 30th round of the 2007 draft as a pitcher, but he didn’t sign, opting to go Middle Tennessee State instead. He’s also been compared to another fine former two-way player – Nick Markakis, but we highly doubt he’ll hit for as high a BA as the Orioles’ flyhawk.

By RotoRob
This entry was posted on Monday, May 27th, 2013 at 11:38 am and is filed under BASEBALL, Minor Matters, Prospects, RotoRob. You can follow any responses to this entry through the RSS 2.0 feed. Both comments and pings are currently closed.