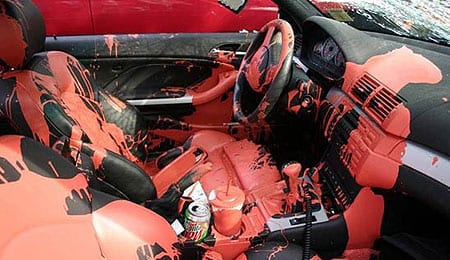 If you own Russell Martin, you’ve probably also been uncontrollably spewing pink liquids all over the place.

Okay, okay, don’t panic. Despite the headline, I’m not advocating the outright dumping of one of the NL’s better catchers. I’m pretty hung over today, but no longer drunk. However, given his in-season and historical trends, it wouldn’t be a bad idea to listen to some trade offers for Russell Martin right now.

After his 0-for-3 Friday, Martin is now in a mini 1-for-10 skid in his last three games, taking a bit of the shine off what’s been a pretty good July so far.

So while Martin is hot, it’s time to play up that improving BA and peddle him. Like most catchers, he tends to struggle in the second half (in his career, his OPS is 70 points lower after the break), making him a prime sell candidate.

It might not be a bad idea to target someone like Geovany Soto, who has had a difficult season and is now hurt. Think of how much you can add to your side of the ledger in that trade — especially in a keeper league.

Play up Martin’s durability and continually improving walk rate, and know that you’re ridding yourself of a catcher who’s numbers have slipped significantly for the second straight season – especially in the power department. A dozen extra base hits in late-July? Uh, ya.

Given that he’s just 26, it’s reasonable to expect Martin’s power to resurface in the next year or two, but right now, I’m a bit worried whether I own him in a redraft or a keeper league.

In his past seven games, Blake is 4-for-25 with eight strikeouts, dimming what had been a very good July up until about a week and a half ago.

In fact, in his last start against Oakland – the worst hitting team in the AL – he dodged a bullet as the A’s failed to capitalize on Galarraga’s wildness that resulted in six walks in 6 1/3 IP.

Izturis will likely start a minor league rehab assignment next week, but expecting him back before late-July is foolhardy.

Zaun seems to have been helped by the extra rest, batting .500 with five runs and five RBI in limited action this month. Saturday, he jacked a solo blast as part of a 3-for-4 night.