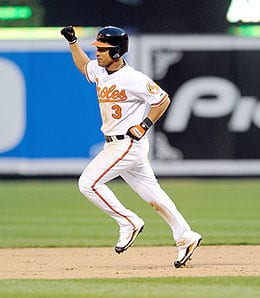 Cesar Izturis’s appendicitis will keep him out for another month.

I sure hope you’re no longer holding onto Oriole shortstop Cesar Izturis, especially with news that he could still be almost a month away from returning as he continues to rehab from appendicitis which has already cost him almost a month. Izturis will likely start a minor league rehab assignment next week, but expecting him back before late-July is foolhardy.

The Orioles, who just dropped two out of three at home against the BoSox to fall six games behind the fourth-place Jays, have turned to youngster Robert Andino as the everyday shortstop, and the fact that there’s no rush to pick him up off the waiver wires tells you everything you need to know. Shortstop was a black hole for the O’s last season, and apparently is remaining so in 2009.

Izturis had actually been doing a bit better offensively before he went down, batting .276 with 10 runs and four steals in May, but the fact that he’s had such difficulty staying healthy is recent seasons is yet another reason to shy away from him. Sure, he was getting more extra-base hits than normal (that’s not saying much) and doing a great job on the basepaths – which is really the only reason he’s even mildly attractive for Fantasy purposes – but Izturis is showing no patience this year, and his great early-season contact rates corrected themselves in May.

At this point, I see no reason to hold on to Izturis or even monitor his progress, and as for Andino, surely there are better options. As for the Orioles’ woes at this position, barring a trade or off-season free agent signing, I don’t see an immediate answer. Their shortstop ranks in the minors are fairly barren, although Pedro Florimon, Jr., a 22-year-old at High A is somewhat intriguing, as he’s taken a nice step forward this year, displaying decent gap power and speed and showing good on-base skills. Moises Coriaco is off to a strong start in the Rookie level GCL, but he’s almost 21 years old already, so it’s hard to place much stock in his performance until he proves he can hit against more advanced competition.

By RotoRob
This entry was posted on Thursday, July 2nd, 2009 at 12:31 pm and is filed under BASEBALL, Daily Dump, RotoRob. You can follow any responses to this entry through the RSS 2.0 feed. You can leave a response, or trackback from your own site.