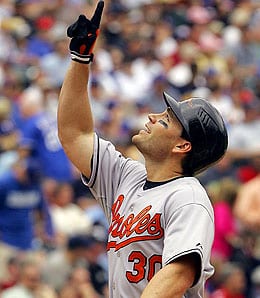 We recommended Luke Scott late last month when he was tearing it up after his activation from the DL, but it looks like the great run is over and it may be time to dump him in standard mixed leagues. First of all, he’s sat plenty with the Orioles playing in NL parks lately. Second of all, after a ridiculously potent May (albeit in limited action), Scott has slumped badly in June, a current 3-for-22 skid dropping him to .239 with a 699 OPS for the month.

He’ll probably be in action tonight as the Orioles – who had been on a roll until landing in South Florida – look to avoid a sweep against the Marlins. With Florida tossing lefty Sean West at B-More, I expect Scott to come through – after all, he’s torching lefties with an OPS of 1137 this year. Overall, Scott is enjoying a big power year with 14 jacks in just 184 at bats, but asking him to maintain the high BA (he was batting .336 less than four weeks ago and has dropped over 40 points since then) was too much.

Scott remains a solid option in AL-only leagues and in deeper mixed leagues, but the time to sell high on the former Astro may have passed.

By RotoRob
Tags: Baltimore Orioles, Luke Scott
This entry was posted on Thursday, June 25th, 2009 at 5:12 pm and is filed under BASEBALL, Daily Dump, RotoRob. You can follow any responses to this entry through the RSS 2.0 feed. Both comments and pings are currently closed.