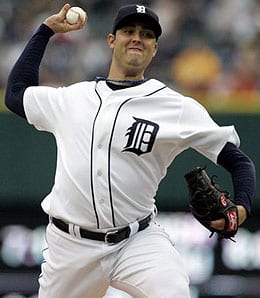 If Armando Galarraga keeps walking people, he will soon lose his rotation spot.

Detroit Tigers starter Armando Galarraga may have won his last two starts, but to say he looked sharp in either outing would be highly inaccurate. In fact, in his last start against Oakland – the worst hitting team in the AL – he dodged a bullet as the A’s failed to capitalize on Galarraga’s wildness that resulted in six walks in 6 1/3 IP.

Galarraga was actually better in June than he was in May, but that’s not saying a hell of a lot after he got bitch-slapped to the tune of an 0-5 record and 8.49 ERA in six starts in May. Even though he pitched better in June, control has remained a serious issue all season. Combine that with a K/9 rate that has declined from his fine rookie effort, and you’re left with a pitcher that is best avoided in standard mixed leagues at this point.

If you’re desperate for a starter, however, next week may be a good time to gamble on Galarraga at least having a chance to bag a win or two, if not actually help your team peripherals. He has a pair of home starts, Monday against the Royals – the second-worst hitting team in the AL – and then Sunday vs. Cleveland, a team that’s hit well on the road, but hasn’t swung the sticks well anywhere recently.

Looking slightly longer term, you’ve got to be worried that if he doesn’t start turning in more quality outings and rein in all those walks, Galarraga could be usurped in the rotation by either Dontrelle Willis or Jeremy Bonderman, whenever the hell either of those two are ready to return. The Tigers have played pretty well lately, but their hold on the AL Central is tenuous with the White Sox suddenly charging hard on their heels, so Detroit won’t hesitate to make changes as soon as some of its walking wounded return.

By RotoRob
This entry was posted on Saturday, July 4th, 2009 at 1:25 pm and is filed under BASEBALL, Daily Dump, RotoRob. You can follow any responses to this entry through the RSS 2.0 feed. You can leave a response, or trackback from your own site.