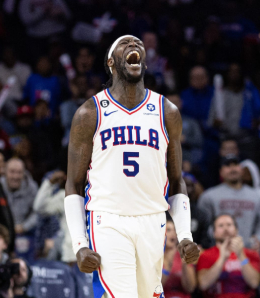 Welcome back to another week of Fantasy basketball. We’re now a week into the “23” portion of the 2022-23 season, so do not hold back any more: milk that waiver wire!

This week, Utah finally won thanks to a career-best 49 points from Lauri Markkanen; Devin Vassell‘s breakout season is on hold thanks to a knee woe that will sideline him indefinitely; and Detroit has lost Marvin Bagley III to injury — again.

Montrezl Harrell, PF/C, Philadelphia 76ers (ESPN: 26.9 per cent; CBS: 5 per cent): It’s been nearly five years since we noted that Harrell was coming into his own. He built on that the following season, but has bounced around since and mostly been in regression, hitting rock bottom this season. However, with Joel Embiid (foot) out, Harrell has reminded us what he can do, scoring at least 17 points as the top big off the bench over the last two games. Harrell can help in blocks (four on Wednesday), and brings strength and athleticism to the table (some of which we saw in some sweet hustle plays on Friday — see video below), although he’s never been much of a post player.

Raul Neto, PG, Cleveland Cavaliers (ESPN: 0.1 per cent; CBS: unowned): The last time we mentioned this dude, he was competing for PT in Utah. Neto has moved from team to team since, but has really more or less been buried on the Cavs’ bench this season. Recently, however, we’ve seen signs of life — especially with Donovan Mitchell (rest) sitting on Friday — as Neto scored 14 points on Wednesday before adding another half dozen (with five dimes) on Friday. Neto is a name to consider in very deep formats or as a DFS option.

Tyus Jones, PG, Memphis Grizzlies (ESPN: 8 per cent; CBS: 32 per cent): We pimped Jones back in late-November, and despite some nice results (fantastic FT shooting in December and increased PT so far this month), his ownership has dropped. However, he could see an even further boost in minutes with Desmond Bane (toe) out day-to-day, so this situation bears watching. Jones is capable of driving the ball, has strong playmaking skills, can pitch in with steals, and has flirted with double-doubles in three of his last four games. Yes, he’s mostly been a backup this season, but has still managed to enjoy his finest scoring campaign to date.

Dennis Schroder, PG, Los Angeles Lakers (ESPN: 24.6 per cent; CBS: 37 per cent): In late-November, we also recommended Schroder, and while his ownership has risen a bit since then, we’re back to give him another nod. On Wednesday, he led the way for an Anthony Davis/LeBron James-less Lakers, going off for a season-high 32 points before adding another 21 on Friday (with LBJ back) to help get the Lakers closer to .500. Schroder was on fire from downtown, canning five of eight as his shooting has gotten better and better as the season has progressed. The secondary scoring and playmaking he offers is worth your Fantasy attention.

Pat Connaughton, SG/SF, Milwaukee Bucks (ESPN: 1 per cent; CBS: 3 per cent): Connaughton saw less PT as the Bucks emptied the bench in a blowout loss on Friday, but has been starting while Kris Middleton (knee) is out and has generally been playing very well (three straight double-digit scoring games before Friday). Of course, Connaughton is no stranger to injuries himself, so don’t invest heavily, but if you need a scoring boost in deeper formats, he’s been getting more touches in recent seasons and is a better three-point shooter than he’s shown in 2022-23.

Jaden Hardy, SG, Dallas Mavericks (ESPN: 0.2 per cent; CBS: 4 per cent): In the second half of a blowout loss on Thursday, the Mavs let Hardy play and he responded by matching his career high of 15 points in just 15 minutes. Get used to this trend as Dallas is opening up more PT for him by waiving veteran Kemba Walker. Hardy has been used off the bench exclusively in his rookie season, and while his shooting could use work, he hasn’t been shy about firing away from long distance. His defensive work will cap his opportunity for now, but there is some offensive upside here worth exploring in deeper formats.

Juan Toscano-Anderson, SF/PF, Los Angeles Lakers (ESPN: 0.2 per cent; CBS: unowned): We gave JTA some love a couple of years ago when injuries opened the door for him to get more PT and, sure enough, he had a solid month before fading a bit and then turning it on with a nice finish. Last season, he saw less action and this season — his first with the Lakers — has seen him slip even further on the depth chart. But Toscano-Anderson suddenly finds himself starting and getting a bit extra burn with John Brown Jr. (quad) out. While JTA hasn’t done much, he bears watching in deeper formats given his current role.

In fact, his nine points in nine games heading into Friday’s action ranked him atop the Hurricane leaderboard over this stretch — not too bad for a recently turned 34-year-old. Staal has seen more PT as the season has progressed and he’s rewarded the ‘Canes’ faith with production. While the veteran is playing well, he needs to be owned. Staal is never going to score a ton of goals, but remains a useful Fantasy option for now.

Over three years later, the now 41-year-old netminder is in Buffalo, yet is still seeing quite a bit of time between the pipes. And why not? Anderson shut out the Kings on Tuesday (his first goose egg since 2018-19) and now has a sub-2.00 GAA in two of the first three months of the season. Want further proof that he’s enjoying a renaissance? Only six goalies that have played 10 games or more so far have better save percentages than Anderson’s .921 mark. He’s actually forcing his way into a bigger role, but the Sabres are being careful about his workload, so don’t expect him to play much more than he currently is.

By RotoRob
Posted in HOCKEY, RotoRob, The Wire Troll | Comments Off on The Wire Troll: Frederick Gaudreau Finds His Scoring Touch