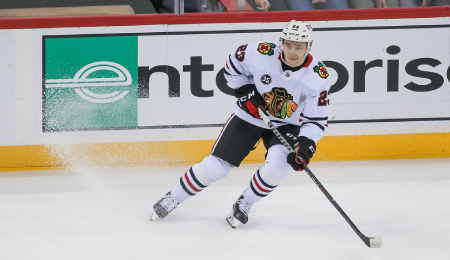 Welcome back to another week of Fantasy hockey. We’re well into January now and recently passed the season’s halfway mark. You know what to do: mine the waiver wire!

This week, Patrick Kane was forced to the sidelines (see below for more on what this may mean); a dreaded LBI will keep Brendan Gallagher out of the Montreal lineup for at least six weeks; and Justin Kirkland seems to have dodged major injuries from a car crash.

Philipp Kurashev, C/RW, Chicago Black Hawks (ESPN: 0.2 per cent; CBS: 3 per cent): Kane (LBI) was out on Thursday, and while it sounds like he’ll be back in action on Saturday, more likely is the long-term prospect that his days in Chicago are numbered as we near the trade deadline. Assuming he is peddled, it’s going to create opportunities for players like Swiss winger Kurashev. Kurashev’s ice time has been inconsistent of late, but that will surely rise if Kane is in fact dealt. Kurashev scored on Sunday, seems to be building good chemistry with his linemates, has been getting plenty of shots lately and has improved in each of his seasons, currently just a goal behind his entire output from 2021-22. For some time now, he’s been a solid depth scoring option with upside as a playmaker, so give him a look as a deep league option and late-season sleeper (pending Chicago’s deadline moves). We really like Kurashev’s future, as long as Dillon Dube doesn’t get near him (see video below).

Tomas Tatar, LW, New Jersey Devils (ESPN: 5.5 per cent; CBS: 29 per cent): Back in October, we recommended Tatar, and while his ownership has risen, he’s still too widely available for our liking. With another assist on Friday, the Czech veteran is up to six helpers through six games in January, putting a tough December in the rear view mirror. Oh, did we mention that Tatar is a career-best +25 (fourth in the NHL)? Maybe our second plea to grab him will not fall on deaf ears. Do it!

Evgenii Dadonov, RW, Montreal Canadiens (ESPN: 0.8 per cent; CBS: 4 per cent): Just under a year ago, we pegged Dadonov as a sleeper when he was shifted onto the top line in Vegas. He didn’t exactly tear it up right away, but justified our faith with a strong final couple months of the season. Now that Gallagher is out, Dadonov should be in the lineup consistently and he’s already showing improvement since being shifted onto a line with Jake Evans and Joel Armia. Dadonov has really struggled and proved a huge disappointment so far this season, but is showing signs of life with two assists last Saturday while his xGP60 has really risen recently. We know he’s capable of much higher point totals and perhaps a regular role will help unlock that.

Kirill Marchenko, RW, Columbus Blue Jackets (ESPN: 2.5 per cent; CBS: 28 per cent): A relative unknown in Fantasy circles, Marchenko has suddenly scored four times over the last four games, giving him nine through his first 18 career contests. Sure, he’s failed to record a single assist, but so what? Marchenko’s ownership is bound to spike very soon, so grab him now. Since coming over to North America after finishing up last season in the KHL — where he put up very impressive numbers relative to his age — all he’s done is score, posting 0.5 goals per game in both the AHL and NHL.

Charlie Coyle, C, Boston Bruins (ESPN: 5.4 per cent; CBS: 12 per cent): Before getting shut out on Thursday, Coyle was heating up, posting a goal and three apples over the previous three games with a nice uptick in PT. Coming off a December that saw him rack up 10 points in 14 games, it’s clear he deserves more Fantasy attention. With 10 goals through the season’s first half, Coyle is on pace to top last season’s total and possibly threaten his career high of 21, set with the Wild in 2015-16. And if your league tracks faceoff percentage, he’s become an asset after several down seasons. Coyle won 9-of-12 draws on Thursday, upping his career-best faceoff percentage to 55.6.

English electronic band Orchestral Manoeuvres in the Dark formed in 1978, and have been active since, except for a 10-year break between 1996 and 2006. In 1998, the band compiled all its singles into a package fittingly dubbed The OMD Singles, and from this comes the anti-war classic “Enola Gay,” originally released in 1980 on Organisation.

By RotoRob
This entry was posted on Saturday, January 14th, 2023 at 12:03 pm and is filed under HOCKEY, RotoRob, The Wire Troll. You can follow any responses to this entry through the RSS 2.0 feed. Both comments and pings are currently closed.