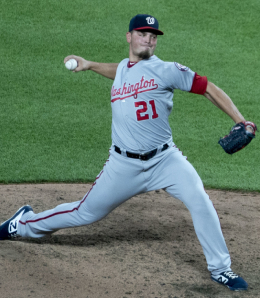 Welcome back to another week of Fantasy baseball. We’re now over two weeks into the season, and if you had predicted that Cleveland would have the best offense in the AL while the Yanks would be languishing in the bottom half, you should probably use your smarts in some NJ sports betting (and, yes, we’ll be taking our cut, thank you very much).

This week, Miguel Cabrera has gotten to the cusp of the 3,000-hit club; Texas lost starter Jon Gray to the IL; and Trevor Bauer‘s leave has been extended until at least next week.

Tanner Rainey, RP, Washington Nationals (ESPN: 23.8 per cent; CBS: 49 per cent): On Tuesday, Rainey bagged a save in his third straight appearance as he seeks to lock down the Washington closer job. But he’s a tough nut to crack so far. Rainey’s had his share of adventures (1.50 WHIP), but still sports an immaculate ERA; he’s already given up a harder hit ball than anything he surrendered all of last year, yet no one has barreled a bat off him so far. The chunky righty is built to throw heat, although his velocity has dipped each season he’s been in the bigs. Still, with Sean Doolittle, Hunter Harvey and Mason Thompson all on the IL, Rainey has a golden opportunity to really sew up this role and if his improved control is for real (don’t forget about how wild he was in the 2019 playoffs — see video below), he just may hold the job all year.

Niko Goodrum, SS, Houston Astros (ESPN: 0.1 per cent; CBS: 1 per cent): It’s been almost four years since we last recommended Goodrum when he was a red-hot rookie. He’s been unable to duplicate that effort since, but with Jose Altuve (hamstring) now on the IL, Goodrum has a chance to gain some traction with his new team, for whom he’s barely played and has been unimpressive with to date. ZIPS is projecting him to record his highest WAR since 2019, so now’s his chance to start working towards that. We’re not expecting miracles here (especially since Aledmys Diaz got the start at second base on Friday), but consider Goodrum in very deep AL-only leagues as a short-term option.

Jose Quintana, SP/RP, Pittsburgh Pirates (ESPN: 1.8 per cent; CBS: 5 per cent): After a nice run to end 2017, things have really gone downhill for Quintana, but so far this season, he’s looked a bit better for the Pirates. Yes, his command has been spotty, but at least he’s delivering positive value and you know he’s capable of racking up the Ks when he’s on (26 per cent K rate since the start of 2021, putting him in the 82nd percentile). Quintana’s flyball rate is down a smidge, but that’s been negated by getting hit harder, so this is definitely a wild card. But if you need pitching help in an NL-only league, he could be worth a flier because of his strikeout potential.

Odubel Herrera, OF, Philadelphia Phillies (ESPN: 0.7 per cent; CBS: NA): After his domestic abuse episode, we were certain the Phils were done with Herrera, yet after he didn’t play in 2020 because he was at Triple-A (and the minor league season was cancelled), he returned to the Phils last year and enjoyed a nice comeback effort, batting .260 while seeing nearly everyday PT. An oblique injury has kept Herrera out this season, but he’s back now and has a chance to earn a full-time role again in time, so consider him an option. If he gets back to his usual flyball rates, he could flirt with 20 homers this season.

Drew Smyly, SP, Chicago Cubs (ESPN: 16.8 per cent; CBS: 17 per cent): Smyly was a top 45 pitcher heading into 2016, but has really struggled with ineffectiveness and injury since. However, early on he’s looking really strong with the Cubs, proving untouchable against lefties while holding righties to a .226 BA before Friday, when he got touched up for a pair of homers in an uninspiring outing. Smyly is throwing strikes, and that could lead him to a second straight double-digit win season — assuming he can stay healthy.

American singer Barbra Streisand got her start in 1960, and has been at it since. In 1981, she released the compilation album Memories, and from this comes “Memory (the Theme from Andrew Lloyd Webber‘s Musical Cats.”

By RotoRob
This entry was posted on Saturday, April 23rd, 2022 at 11:43 am and is filed under BASEBALL, RotoRob, The Wire Troll. You can follow any responses to this entry through the RSS 2.0 feed. Both comments and pings are currently closed.