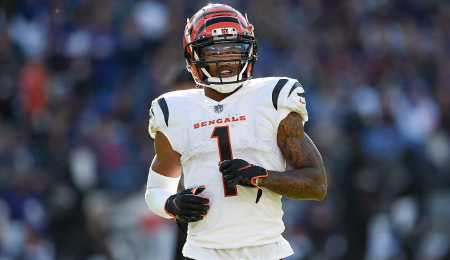 If Ja’Marr chase returns, the Bengals’ offense could blow up. (AP Photo/Gail Burton)

Face it, when the Cincinnati Bengals got off to an 0-2 start, only the most optimistic would have expected them to be in a tie for the division lead heading into Week 13.

But three straight wins, five out of six and a 7-2 mark since that ugly beginning, the Bengals are right there, tied with the Baltimore Ravens atop the AFC North, three games up on the Browns and Steelers.

However, this hot streak will face an extremely tough test on Sunday when the Kansas City Chiefs (2.5 point-favourites as per FanDuel) come visiting.

These teams had never really been rivals, but after Cincy beat the Chiefs twice last season — the second of which was an overtime win in the AFC Final — suddenly there’s a hell of a lot more intrigue to this matchup.

You’ve got the K.C. revenge narrative, but also some bragging rights between two of the top young quarterbacks in the game: Joe Burrow and Patrick Mahomes. If you ask Bengal WR Tyler Boyd, it’s this generation’s version of Tom Brady vs. Peyton Manning.

Burrow looked like a real candidate to bag MVP of last year’s Super Bowl, but his performance wasn’t quite what we’d come to expect from him in 2021, so it wasn’t good enough to overcome the Rams.

This season, he has again shot past the 3,000-yard mark, but overall hasn’t been quite as effective given that we haven’t seen any many big plays (Ja’Mare Chase‘s absence is the culprit here), and his overall gains per attempt number has dipped. Still, Burrow has shown progress as he’s not getting picked or sacked as often.

To be fair, it’s clear that his August appendectomy was still affecting him early on this season. Having said that, Burrow is not exactly entering this game hot, coming off his worst performance since Week Five. Regardless, he should be a top five QB for Fantasy purposes this week given KC’s fairly porous pass defense.

Getting Chase (hip) back this weekend would sure help the Bengals’ pass attack. Let’s face it, Boyd has been rather underwhelming since hauling in 155 yards in Week Seven. To put that in perspective, he’s managed just 140 yards in the four games since.

Sure, Boyd’s targets are down over the last four games, but having hauled in just four of 11 over the last two games, he’s not exactly screaming for an increase. He has a nice matchup this weekend, so will make for a solid WR4 option, with potential upside as a WR3 if Chase remains sidelined.

For his part, after being a practice participant on Wednesday (see video below), Chase says he feels good enough to get “some reps” on Sunday. If he’s 100 per cent, he’s an easy top 10, even top five WR this week. But there’s some risk here, even if he absolutely destroyed the Chiefs last season (320 yards receiving and four touchdowns in two games).

Meanwhile, RB Joe Mixon (concussion) is still in protocol, but has been a limited participant in practice this week after showing some progress. He’s a low-end RB1 if he can take the field.

While this recent run has massively improved the Bengals’ chances of making the playoffs again, the team still has plenty of work to do. Special teams has been meh, while the punting unit is the fourth-worst in the league. If Cincinnati has designs on finishing what it started last season, this area will need to be better.

Still, it’s possible the team’s early-season struggles made the defending AFC champs look like a long-shot to repeat, so the motivation to prove it can hang with high end teams is helping fuel the current roll.

American rappers Beastie Boys got their start in 1978 and remained active until 2012. In 1992, they released their third album, Check Your Head, and the disc’s final track is “Namaste,” which is a real departure for the band.

By RotoRob
This entry was posted on Thursday, December 1st, 2022 at 3:27 pm and is filed under FOOTBALL, Game Preview, RotoRob, Team report. You can follow any responses to this entry through the RSS 2.0 feed. Both comments and pings are currently closed.