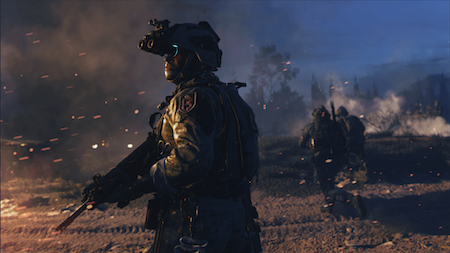 With its 2022 launch of Modern Warfare 2, Activision’s juggernaut Call of Duty series has now seen an annual release each of the last 18 years, bringing it one step closer to being added to death and taxes among life’s certainties. As with their 2019 title, Modern Warfare, developer Infinity Ward has continued to re-envision the series that revolutionized CoD back in the late 2000s, this time bringing MW2 (first released in 2009) back to life.

To be clear, these are not remakes. While the story involves characters that were featured in the previous version (e.g., Soap, Ghost, Captain Price, etc.), the events are wholly different. It is worth noting that in all our years reviewing Call of Duty, the original Modern Warfare 2 stands as our favourite with a quality campaign, fun spec-ops mode, and peak multiplayer. It is a classic in every sense of the word. Unfortunately, the new vision for MW2 can’t keep pace.

This time, Task Force 141, in conjunction with the United States military and intelligence agencies, is tracking down notorious terrorist Hassan Zyani, who is looking for revenge after the leader of his organization was killed in a missile strike. Attempts to apprehend Hassan fail, and it’s learned that he is now working with Mexican drug cartels and is seeking a way to smuggle missiles into the US via the southern border.

Tracking and neutralizing Hassan is your top priority, though as you’d expect mission objectives will change as you progress through the roughly six-hour campaign. The game tries to deliver some of the “holy shit” moments that, in many ways, started in earnest with the nuclear explosion in the original MW2, but many will see a lot of the story beats coming from a long way off. While it’s a perfectly serviceable story, it never delivers any meat.

Infinity Ward has doled out a good number of bite-sized missions this time around, and they try to follow the usual CoD blueprint of delivering varied experiences. It works, even if there’s a samey feel to a lot of it — sniper mission, stealth mission, overwatch mission, and so on. There are a couple of annoying moments as well, particularly on higher difficulties, such as a rescue mission where you have to dodge mines while chasing down a hostage. Not fun.

As ever, though, Call of Duty‘s longevity springs from its multiplayer, and on that front Modern Warfare 2 does a very good job. Gunplay feels weighty and precise, allowing unique classes to actually feel different from one another, creating some variety for those that like to mess around with the options rather than focus on one style.

Speaking of options, the weapon progression system has been expanded to allow for an impressive degree of customization within your personal arsenal. In addition to equipping up to five attachments to your gun, you’re also able to micromanage your weapon’s potency in specific situations, such as making your character move more slowly while looking down the sight in exchange for steadier aim. As someone that prefers tactical engagement to run-and-gun, this is a welcome option.

Modes are what you’d expect with Kill Confirmed, Team Deathmatch, Prisoner Rescue (VIP), Ground War, and so on. While there’s nothing new of note, they’re tried-and-true options that should give anyone’s play style somewhere to fit in. We tend to go for the classics, primarily TDM, but the large-scale modes feel a little more fun this year, adding CPU-controlled bots to pad out the maps so moments of being detached from the action are less frequent.

Modern Warfare 2 launches with 16 maps, and though doubtless our enjoyment of them will ebb and flow as the hours pile up, our initial reaction is positive. None of them elicited the eye roll that something like Das Haus did for Vanguard. Early favourites are Embassy, Taraq, and Border Crossing, while Farm 18 feels like the weakest of the initial offerings. Still, on balance it’s a strong start.

In addition to competitive multiplayer, the cooperative Spec Ops mode makes its return, allowing you and a partner to tackle one of three scenarios: Low Profile, Denied Area, and Defender: Mt. Zaya. As someone that really enjoyed this aspect back with the original MW2 we were happy to see it make an appearance. Of the three missions, we’d go with Low Profile as our favourite as it favours a more cautious, measured approach. More missions will hopefully be added in the upcoming Seasons, as these do feel like they’ll have a limited shelf life.

While the campaign is disappointing from a story perspective and a bit uneven in terms of mission layout, the gameplay is extremely tight. Multiplayer also has a nice meaty feel to it with some appreciated under-the-hood improvements. If you enjoy Call of Duty, Modern Warfare 2 should provide many hours of fun.