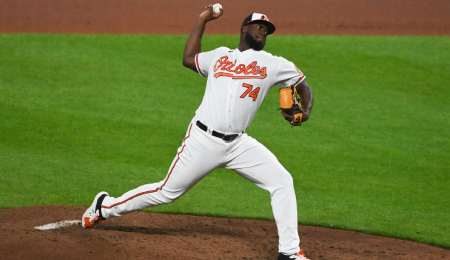 Felix Bautista is among those who benefited from the trade deadline. (Tommy Gilligan-USA Today Sports)

Welcome back to another week of Fantasy baseball. The trade deadline has passed, and several of the moves created opportunities for those left behind. Let’s examine how you can take advantage of some of these situations.

This week, Clayton Kershaw‘s relatively healthy — and great comeback — season has taken a turn as his back is acting up; the Angels mashed seven dingers in a game, yet somehow lost; and sure fire Hall of Famer Miguel Cabrera is considering packing it in after this season.

Felix Bautista, RP, Baltimore Orioles (ESPN: 13.3 per cent; CBS: 38 per cent): If you’re in the market for late-season saves, Bautista could be a good use of some FAAB now that closer Jorge Lopez has been dealt to Minny. A 27-year-old rookie, Bautista bagged the save on Friday, but has looked a little shaky lately, and he has some competition for the gig, so it’s a risk. But this dude has been lights out most of the season, and has gotten harder and harder to hit over the course of the campaign (.075 BAA in July). A beanpole Dominican, Bautista has a great K rate thanks to his elite fastball (check out his nasty stuff in the video below), but command remains a work in progress — even if it’s been better than advertised this season.

Justin Steele, SP/RP, Chicago Cubs (ESPN: 8.2 per cent; CBS: 22 per cent): Steele impressed us with his work at Triple-A last season, and in 2022 he’s built on that in his first full year in the Cubs rotation. He’s given up just one earned run over his last three starts combined as he continues to get better as the season has progressed (although his command was a bit spotty in July). Not surprisingly, Steele’s K/9 is down slightly as a full-time starter, but considering how strong he’s looked over the last six starts, he’s emerged as an intriguing streaming or deeper mixed league option.

Bryson Stott, SS/2B, Philadelphia Phillies (ESPN: 3.8 per cent; CBS: 25 per cent): No. 54 on our Top 100 Prospects list this spring, Stott has mostly scuffled in his rookie season (580 OPS), however, he’s now the everyday shortstop with Didi Gregorius being released. Stott celebrated with a hit on Thursday before an 0-fer on Friday, giving him safeties in four of the last six games, so perhaps he’s showing signs of life after mostly slumping since the end of June. Let’s hope the vote of confidence allows Stott to put together a strong finish, making him worth consideration in NL-only leagues.

Rowan Wick, RP, Chicago Cubs (ESPN: 4 per cent; CBS: 13 per cent): Wick was a popular preseason pick to emerge as the Cubs closer, but it was apparent right from the outset of the season that this wasn’t necessarily going to pan out. Well, he just may get another crack at the gig now after Chicago blew up its bullpen by dealing David Robertson, Chris Martin, Scott Effros and Mychal Givens. Despite better control, Wick has been a disappointment to his owners this season, but he seems to have righted the ship recently, rhyming off eight straight scoreless outings (including a win on Friday) to put an ugly June in the rear view mirror. He has closing experience, so perhaps he can salvage his season from a Fantasy perspective by racking up some saves down the stretch.

Robert Dugger, RP, Cincinnati Reds (ESPN: 0.3 per cent; CBS: unowned): Another pitcher that could benefit from the trade deadline is Dugger, who has yet to really make a name for himself among Fantasy owners. But now that Luis Castillo and Tyler Mahle have been dealt away, there could be a rotation spot with Dugger’s name on it. Dugger made his first start of the season on Friday, but it was a shaky effort as he was unable to build on his only outing in July (3 2/3 shutout innings). He’s gotten a bit better in each of the last two seasons, and his xFIP of 3.73 suggests promise. Feel like taking a flier on a fairly inexperienced hurler who should have plenty of rope?

Kirby Yates, RP, Atlanta Braves (ESPN: 0.5 per cent; CBS: 2 per cent): Yates was a Wire Troll All-Star in 2018, and he followed that up with a career year in 2019, when he was next to impossible to barrel up. But since then, things have unravelled for him. Yates made six ugly appearances in 2020 before getting hurt and missing the rest of the season. He ultimately required Tommy John surgery in March 2021 and is expected to return next week. When he last pitched, Yates was still in the top 60th percentile with his heater, so if he can rediscover his 2019 form, he’ll be worth grabbing for the stretch run.

Barenaked Ladies had the distinction of putting out the first independent release to go Gold in Canada. Their first greatest hits package, Disc One: All Their Greatest Hits (1991-2001) features all the band’s released singles, including “It’s All Been Done,” originally released on the 1998 album, Stunt.

By RotoRob
This entry was posted on Saturday, August 6th, 2022 at 12:45 pm and is filed under BASEBALL, RotoRob, The Wire Troll. You can follow any responses to this entry through the RSS 2.0 feed. Both comments and pings are currently closed.