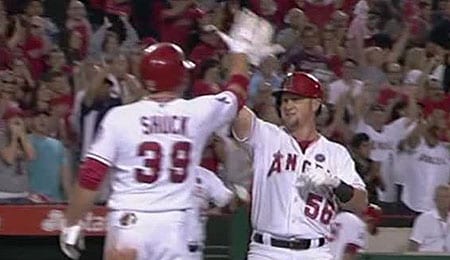 The July 31 non-waiver trade deadline has now passed and as most often the case is, the hype was unjustified. However, remember that the non-waiver deadline is simply the first step. Players will be exposed to waivers on a daily basis so expect plenty of moves as the contenders attempt to beef up their rosters for the final push in September.

Without further ado, let’s give this week’s Troll the once over.

Kole Calhoun, OF, Los Angeles Angels of Anaheim (CBS: 7 per cent owned, ESPN: unowned): Albert Pujols’ injury prompted the Halos to call up Calhoun and so far he’s responded in spectacular fashion. Calhoun has been absolutely feasting on the Jays’ pitching this weekend, going 7-for-15 with two homers, three RBI and one theft. He was enjoying an impressive year at Triple-A Salt Lake (with a flair for the dramatic, as you can see in the video below) and should generate some serious FAAB spending this weekend.

Jonathan Schoop, 2B, Baltimore Orioles (CBS: 4 per cent owned, ESPN: unowned): After missing nearly two months with a stress fracture in his back, Schoop has returned with a vengeance at Triple-A, smacking four homers in his first five games back and looking poised to take the next step. How long do the O’s continue to roll out the three-headed monster known as Brian Roberts, Alexi Casilla, and Ryan Flaherty?

Bud Norris, SP, Baltimore Orioles (CBS: 56 per cent owned, ESPN: 15 per cent): In his Baltimore debut, Norris struck out a season-high eight against his former club, the Astros. Moving from the basement to a pennant race could be the motivation he needs to deliver on the potential he’s flashed in spurts over the past several years.

Tyson Ross, SP, San Diego Padres (CBS: 12 per cent owned, ESPN: 7 per cent): Since Ross rejoined the rotation July 23, he’s racked up three outstanding starts, allowing eight hits, six walks, and only three earned runs in 20 IP. Toss in the two wins and 22 strikeouts and we have a pitcher that’s on a serious roll.

Marcus Stroman, SP, Toronto Blue Jays (CBS: 2 per cent owned, ESPN: unowned): Stroman is enjoying a great year down on the farm and in his last two starts has fanned 24. Is a promotion in the cards for the 22-year-old righty?

Danny Farquhar, RP, Seattle Mariners (CBS: 2 per cent owned, ESPN: 1 per cent): Tom Wilhelmsen has been removed from the closer role (again) after his latest implosion Thursday against the BoSox. Farquhar earned the save Saturday and while he’s been the most consistent reliever in the Mariners’ pen lately, you can’t rule out the possibility that Oliver Perez and Yoervis Medina will work their way into the mix for saves while Wilhelmsen works on his issues.

Ryan Vogelsong, SP, San Francisco Giants (CBS: 21 per cent owned, ESPN: 13 per cent): Vogelsong tossed five scoreless innings in his latest rehab start Tuesday, so he could return to the Giants rotation as early as next weekend.

Chia-Jen Lo, RP, Houston Astros (CBS: 1 per cent owned, ESPN: unowned): Jose Cisnero was considered the favourite for saves in Houston after Jose Veras was dealt to the Tigers, but don’t rule out any of the ‘Stros relievers. So far, no one has stepped up, so Lo, with his mid-90s high heat, is an intriguing option.

Eric Sogard, 2B, Oakland Athletics (CBS: 4 per cent owned, ESPN: 2 per cent): Sogard has replaced John Jaso (concussion) in the two hole and is quietly getting the job done. If you have any doubts, you can always take Matt Garza’s word for it.

Wil Nieves, C, Arizona Diamondbacks (CBS: 1 per cent owned, ESPN: unowned): Nieves is the No. 1 catcher while Miguel Montero (back) is out.

Brett Oberholtzer, SP, Houston Astros (CBS: 2 per cent owned, ESPN: unowned): Oberholtzer shut down the Orioles Wednesday by spinning seven innings of three-hit ball with no walks against six Ks. He’s worth a gamble in NL-only and deeper mixed leagues but is heading into a two-start week against the Rangers and Red Sox, so it would be prudent to keep him on the bench this week.

Samuel Deduno, SP, Minnesota Twins (CBS: 22 per cent owned, ESPN: 16 per cent): Deduno has rhymed off four consecutive quality starts. Have we found the new “ace” of the Twins?

Xander Bogaerts, SS, Boston Red Sox (CBS: 37 per cent owned, ESPN: 2 per cent): A whopping 37 per cent of CBS league owners believe we see the young phenom plying his trade in Boston in the near future. Maybe Will Middlebrooks doesn’t get that promotion we mentioned in last week’s Troll.

Andre Rienzo, SP, Chicago White Sox (CBS: 6 per cent owned, ESPN: unowned): The Brazilian native had a very impressive debut last week against the Tribe. If Rienzo can survive Rick Porcello and the Tigers offense Sunday, he’s got the Twins next on the schedule.

Now it’s your turn. Who did we miss this week? Let us know in the comments below.

By Tim McLeod
This entry was posted on Sunday, August 4th, 2013 at 12:47 pm and is filed under BASEBALL, The Wire Troll, Tim McLeod. You can follow any responses to this entry through the RSS 2.0 feed. Both comments and pings are currently closed.