The Wire Troll: Mitch Keller Proving Himself for Pirates 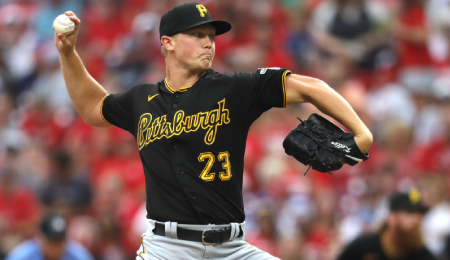 Mitch Keller is finally coming into his own. (David Kohl-USA Today Sports)

Welcome back to another week of Fantasy baseball. We’re nearing the end of June — not far from the season’s halfway point — so be sure to squeeze as much value from the waiver wire as possible.

This week, Aaron Judge continued to show he’s worth the money; Danny Mendick (ACL) is done for the season (we’ve got a related recommendation below); and Ty France (forearm strain) came out early on Thursday and will hit the IL.

Mitch Keller, SP, Pittsburgh Pirates (ESPN: 3.6 per cent; CBS: 16 per cent): A graduate of our 2020 Top Prospects list, Keller managed to win some games last year, but it was a pretty ugly season. This year, his record is even worse, but that’s what you get pitching for the Pirates. Behind that, however, Keller is much harder to hit — especially over his last seven starts in which he’s massively excelled, trimming his ERA by nearly two runs as he’s gone to his sinker more often (the slider has also been a great weapon for him… see video below). How about a 2.82 ERA and .226 BAA for June? At this point, Keller has worked his way into a streaming option, albeit still a high risk one, but one that seems to be coming into his own — finally (recall that he’s been on the prospect radar since 2016, so this is a breakout we’ve been waiting on forever). At the very least, we expect him to be a rotation mainstay capable of gobbling up innings.

Andre Pallante, SP/RP, St. Louis Cardinals (ESPN: 3.6 per cent; CBS: 10 per cent): We’ve got several deep league options this week, a few of whom are veritable unknown Fantasy assets. Pallante, for instance, has looked very sharp over the last couple of weeks, giving up three earned runs over fewer in each of his four starts in June (3.09 ERA, .247 OBA) since being shifted into the rotation, including a hard-luck loss on Friday. While his record is meh, the rookie is generating positive value and showing better control compared to what he did in the minors last year (although there’s still room for improvement here).

Lenyn Sosa, SS, Chicago White Sox (ESPN: 0.6 per cent; CBS: 5 per cent): Sosa has been recalled to make his MLB debut thanks to Mendick being done for the season. While how much PT Sosa will get is an open question, there is a chance he takes over second base for the Pale Hose. In his second stint at Double-A, he’s dramatically improved his hitting and extra-base sock, so don’t be shocked if he works his way into a very important role here.

Dominic Smith, 1B/OF, New York Mets (ESPN: 1.1 per cent; CBS: 6 per cent): Just over a year ago, Smith was still pretty much an everyday player in the wake of his amazing 2020 season. However, after July 2021 things went downhill and continued into this season, prompting a demotion to Triple-A. Well, Smith is back now, delivering hits in all three of his appearances since being recalled, so perhaps a taste of the minors sparked him (although he did fail in a key bases loaded situation on Wednesday, which was not ideal). If he can rediscover a power stroke that’s been in free fall the last two years, he could be a nice asset, especially given the nice uptick in walk rate he’s experienced this season.

Jake Meyers, OF, Houston Astros (ESPN: 0.2 per cent; CBS: 2 per cent): Meyers (shoulder) was activated off the IL on Friday and has taken over the CF job given the struggles of both Chas McCormick and Jose Siri (demoted to make room). While Meyers didn’t walk as much in an otherwise solid rookie effort last year, he’s turned that around during his rehab stint at Triple-A. While in the bigs last year, he hit the ball harder than the average bear, and for our money, he’s a fine second half sleeper that you may want to get an early jump on.

Tyler Nevin, 3B/OF, Baltimore Orioles (ESPN: 0.1 per cent; CBS: 1 per cent): Nevin flashed some potential in his brief look last year, but hasn’t exactly lit the world on fire this season. Having said that, he’s drawn five walks and scored twice over the last four games and is earning free passes at an elite rate (11.9 per cent). We do expect his BA to normalize over the remainder of the season (his BABIP is currently .232), but where Nevin offers some value is in deeper AL-only OBP leagues.

Masyn Winn, SS, St. Louis Cardinals (ESPN: 0.1 per cent; CBS: 3 per cent): Winn seems to be on the fast track for the Cardinals, having already reached Double-A in just his second professional season after being drafted out of high school. His hitting at High-A improved by leaps and bounds this year, prompting a promotion a month ago. Since arriving at Double-A, Winn’s BA has slid, but he’s back to hitting the ball on the ground more often to take advantage of his speed, which is his most impressive tool. We’re not projecting him to be much of a power threat, but with his contact skills and stolen base potential, he makes a fine Dynasty League option.

Barenaked Ladies almost instantly developed a cult following before gaining some legitimate international success over the years. Here’s another track from Disc One: All Their Greatest Hits (1991-2001) covering the best of the band’s first decade of work… this is the live version of “Brian Wilson,” a classic originally released on the 1992 album Gordon.

By RotoRob
This entry was posted on Saturday, June 25th, 2022 at 11:47 am and is filed under BASEBALL, RotoRob, The Wire Troll. You can follow any responses to this entry through the RSS 2.0 feed. Both comments and pings are currently closed.