The Wire Troll: Joey Lucchesi May Get a Look in Mets Rotation 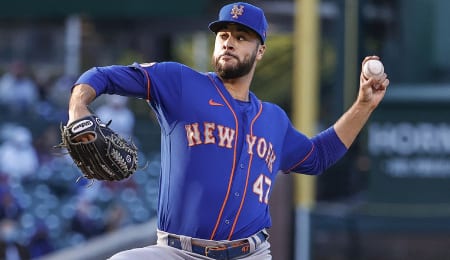 Joey Lucchesi could bounce back from a forgettable 2020 season. (Kamil Krzaczynski-USA Today Sports)

Welcome back to another week of Fantasy baseball. With the NBA and NHL regular seasons finally over (more or less), we’re now focusing on baseball for the next few months, so strap yourself in and get ready to employ the Fantasy baseball waiver wire.

This week, Gleyber Torres became the eighth Yankee with Covid as the virus bashes the Bombers; Corbin Burnes reached a new standard for control, hitting a record 58 strikeouts before finally issuing his first free pass of the season; and Albert Pujols has officially been released by the Angels after getting DFAed last week, so it will be interesting to see if anyone picks him up or if this is the end of the line for the future Hall of Famer.

Joey Lucchesi, SP, New York Mets (ESPN: 2.1 per cent; CBS: 5 per cent): It’s been over two and a half years since Lucchesi burst onto the Fantasy scene and earned a place on our 2018 Wire Troll All-Star Team. While he reached double digit wins in 2019, it’s been a rough ride since as he struggled badly last year, spending most of the season at the alternate training site. Acquired by the Mets in mid-January as part of a three-team deal, Lucchesi hasn’t fared much better so far this season (see video below for a taste of his troubles), but he could get some more starts with Jacob deGrom currently on the IL, so consider him an option in NL-only leagues. The promising news for Lucchesi is that his velocity is higher than ever and he’s been going to his fastball with higher frequency than at any other time over his career while ditching his cutter completely (of course, his churve has been getting raves for some time). His upside isn’t sky high — perhaps as a solid No. 4 starter — but we’re curious to see how his new approach pans out over time.

Andrew Knapp, C, Philadelphia Phillies (ESPN: 0.7 per cent; CBS: 1 per cent): Knapp has never been much of a Fantasy asset, but with J.T. Realmuto landing on the Covid IL, he finds himself starting. Of course, according to his battery mate Zack Wheeler, Knapp could be a starter if he played on another team. If you’re desperate at the always tough to fill catcher slot, Knapp has managed three hits and four walks over the last three games, but he’s shown almost no extra-base sock so far this season. For what it’s worth, he’s seeing fewer split-finger fastballs this year after having a bit of success against the pitch last year. As a temporary NL-only option, you could do worse than using Knapp until Realmuto returns.

Tyler Wade, 2B/SS, New York Yankees (ESPN: 0.3 per cent; CBS: 1 per cent): We know Wade can be useful at times; just last year he earned consideration for our Wire Troll All-Star Team. Well, with Torres (Covid) out and Gio Urshela (knee) not at 100 per cent, Wade got the start at shortstop on Friday, making him an intriguing short-term option in deep AL-only leagues. Unfortunately, Wade has been struggling (just one hit in May so far), but it’s not as if he’s had many chances. Perhaps some consistent reps will get him going, and given that he’s not being attacked with the same velocity this year, he should have a chance to step up.

Zack Collins, C, Chicago White Sox (ESPN: 0.5 per cent; CBS: 4 per cent): Near the end of the 2019 season we pimped Collins, at the time still projecting him to be a strong hitting catcher. Well, he did us proud, finishing the season strong while seeing tons of playing time in September. Unfortunately, last year was a lost season for Collins as his extra-base pop disappeared and he spent most of the season at the alternate training site. Well, the pop is back now, and he’s taken a big step forward this year, with upside to grow. Better yet, with Jose Abreu getting knocked out early on Friday, it was Collins who shifted to first base. Should Abreu miss any time, expect Collins to see everyday reps, and after Collins hit well playing in both games of the doubleheader on Friday, he could be nice pickup. We love the fact that after struggling against cutters last year, Collins been hitting them well this season.

Jonathan Loaisiga, RP/SP, New York Yankees (ESPN: 14 per cent; CBS: 17 per cent): While Loaisiga’s fastball hasn’t been nearly as effective this year, strides he’s made with his sinker and cutter have more than compensated. He took a beatdown last weekend, but otherwise has been splendid in a setup role this season. Toss in his wins, ERA, WHIP and mix of saves and holds, and he’s a very valuable non-closing reliever.

Robbie Grossman, OF, Detroit Tigers (ESPN: 38 per cent; CBS: 34 per cent): Grossman is performing better against four seam fastballs than he ever has during his career, and while he may not be flashing the same extra-base power he did last year, you’ve got to love the speed he brings to your team.

English hard rock band Deep Purple got its start in 1968, and notwithstanding a break between 1976 and 1984, is still at it today. The band came out strong in 1968 and just three months after its debut album it released The Book of Taliesyn, the first song from which was “Kentucky Woman,” featuring the fantastic B-side “Hard Road.”

By RotoRob
This entry was posted on Saturday, May 15th, 2021 at 11:05 am and is filed under BASEBALL, RotoRob, The Wire Troll. You can follow any responses to this entry through the RSS 2.0 feed. Both comments and pings are currently closed.