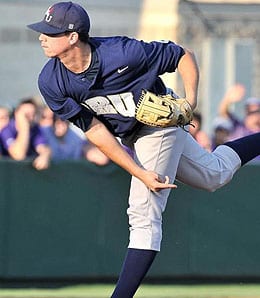 With the 2013 MLB Draft now complete, it’s time for us to wrap up our look at the first round.

23. Texas Rangers – Alex Gonzalez, RHP, Oral Roberts: Gonzalez is nicknamed Chi-Chi, which is handy in case the fact that he’s not a shortstop is not enough to hep differentiate him from the game’s other Alex Gonzalezes. His draft stock really soared in the weeks leading up the draft; in fact, some believed he could go in the top 10. The 21-year-old pitches in the 90 to 92 mph range and has three different offerings that he can get over for strikes.

24. Oakland Athletics – Billy McKinney, CF, Plano West St. High School (Texas): Yes, the A’s took a high schooler for the second straight year. Moneyball? Bah! Despite the fact that McKinney is committed to TCU, the A’s won’t have any problems signing this sweet-swinging flyhawk (check out the video below for evidence of how gorgeous his swing is). He has a gifted bat – one of the best of all high schoolers in this draft — but there are questions about the upside of the rest of his toolset. No one, however, questions McKinney’s effort as he’s known to play all-out all the time.

25. San Francisco Giants – Christian Arroyo, SS, Hernando High School (Florida): The Giants tried to beef up the offensive side of the organization by taking sticks with three of their first four picks this year, headlined by Florida prep shortstop Arroyo. Picking him surprised some, as Arroyo wasn’t a projected first rounder; in fact, most experts ranked him at the bottom of or even outside any top 100 list. He’s got some power, with potentially more to tap into if he can refine his approach. What cinched it for the Giants was Arroyo’s MVP showing for USA Baseball’s 18-under team.

26. New York Yankees – Eric Jagielo, 3B, Notre Dame: Why on earth would the Yankees need a third baseman considering they have A-Roid? [Pause to let dripping sarcasm sink in.] Jagielo, the 2013 Big East Player of the Year, hit .321 in his Fighting Irish career, prompting some to believe he could be a top 20 pick. College third basemen were a strength of this draft, but Jagielo has the bat to differentiate himself from the pack. And while he’s likely to stick at the hot corner, even if he has to shift over to first base for defensive purposes, he rakes enough to succeed.

27. Cincinnati Reds – Phillip Ervin, CF, Samford University: The Reds haven’t necessarily exhibited a pat drafting philosophy in recent years, but for the most part their darts have hit the board, so there’s no reason to question the selection of Ervin. He gives the team the right-handed hitting outfielder it needs, and all the better if he can stay in centre. Ervin, who turns 21 next month, offers a nice collection of across-the-board tools – especially his bat.

28. St. Louis Cardinals – Rob Kaminsky, LHP, St. Joseph Regional School (New Jersey): Despite his height, (6’0″) Kaminsky is one of the top high school lefties in this draft thanks a heater that comfortably resides in the 91-92 mph range, but has been cranked up to 94, and a nasty curve. The last time a New Jersey high school kid went in the first round, things turned out okay (Mike Trout, anyone?). Kaminsky isn’t massively projectable, but for a high school hurler, he’ll move fairly quickly.

29. Tampa Bay Rays – Ryne Stanek, RHP, Arkansas: One of a whopping (and new school record) 11 Razorbacks picked in this draft, Stanek will turn 22 next month. He was originally a third rounder by Seattle in 2010, but he opted to attend college, and that worked out well for him. Stanek is thin (6’4″, 180) so if he doesn’t add weight, durability could be an issue, but for now he looks like a high-end No. 3 or low-end No. 2 starter.

30. Texas Rangers – Travis Demeritte, SS, Winder Barrow High School (Georgia): Demeritte has already signed, making the Rangers the first team to ink their first three picks. This right-handed hitter is 6’1″, 195, and possesses a very quick bat, but it’s unclear what position he’ll wind up as he could be ticketed for the hot or keystone corners (probably third base). A Brandon Phillips-type, Demeritte was also the ace hurler for Winder Barrow.

31. Atlanta Braves – Jason Hursh, RHP, Oklahoma State: Hursh can bring the heat, having been clocked as high as 98 mph and usually residing in the 92-95 mph range. His fastball is considered one of the top pitches in this year’s draft. Hursh missed all of last year after Tommy John surgery, but he bounced back this season and proved he was healthy. He’s well built and athletic, but until this 21-year-old’s secondary offerings improve, he projects as either a back-of-the-rotation starter or as a reliever.

32. New York Yankees – Aaron Judge, CF, Fresno State: With their second pick, the Yankees scooped up behemoth (6’7″, 255) outfielder Judge. Just try hitting a ball over this dude’s head. On Tuesday, Judge joined the Yanks for BP and impressed the hell out of Manager Joe Girardi with his power. There’s no doubt the potential is there, but we didn’t really see it manifest itself in performance until this year, and really he’s still quite raw. The A’s grabbed him in the 31st round in 2010, but Judge judiciously opted to attend Fresno State and now he’s a first rounder. Expect lots of dingers… and lots of whiffs.

33. New York Yankees – Ian Clarkin, LHP, Madison High School (California): Clarkin made no secret of the fact that he hated the Yanks as a child and that he wouldn’t automatically sign with them if they drafted him, but the Bombers were undeterred and plucked him with their third pick anyway. The Pinstripers are confident they can sign him, so time will tell. Armed with a strong curve and 95 mph fastball, Clarkin also has a change-up that some believe could become his go-to offspeed pitch. That’s saying something, because his curveball is considered among the best of any high school pitcher in this year’s draft.

Crave more in-depth Fantasy analysis? Then join us every Thursday at 9 p.m. EST for RotoRob’s Fantasy Baseball Weekly Podcast on Blogtalkradio. Tim McLeod and RotoRob will entertain and edify you for a half hour or more each week. This week, we examine the latest chapter in the ongoing Red Sox-Rays beanbrawl war. Tune in here.

By RotoRob
This entry was posted on Wednesday, June 12th, 2013 at 11:02 am and is filed under BASEBALL, Draft report, Prospects, RotoRob. You can follow any responses to this entry through the RSS 2.0 feed. You can leave a response, or trackback from your own site.