What’s Next for the Chicago Cubs? 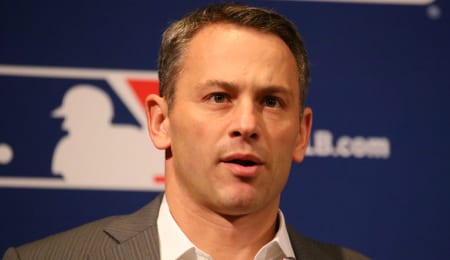 Jed Hoyer inherits a talented team, but one with a questionable future. (Arturo Pardavila III)

The landscape looks a little bleak for the Chicago Cubs right now, following the resignation of club President of Baseball Operations Theo Epstein after nearly a decade on the job. He cited several factors for his decision, but honestly, it all comes down to one thing: money.

Team ownership had hamstrung Epstein, and there could be a serious exodus of high-priced talent from the Cubs very soon, perhaps starting this winter.

Having said that, while incoming President of Baseball Operations Jed Hoyer — who has been with the organization for nine years — will face similar obstacles as he tries to maintain the team’s status as a contender, all is not lost as he’s proved he’s an astute evaluator of talent (not to mention, he really knows how to walk through a parking lot, as the “action” footage below proves).

Here are some examples of Hoyer’s scouting prowess in action:

Reportedly, he had a real issue at the 2017 trade deadline when the Cubs dealt away prospect Eloy Jimenez (along with Dylan Cease, Bryant Flete and Matt Rose) for starter Jose Quintana, but of course, he didn’t have the final word at the time.

Jimenez, meanwhile, enjoyed a tremendous rookie season in 2019, bashing 31 homers and walking nearly as often as he had at Triple-A the season before. This year, he was even better, staying healthy, and seeing a nice increase in BA thanks to a .340 BABIP (which is not out of line from what he accomplished as a minor leaguer). Jimenez is clearly a budding star, while Quintana is now a free agent seeking redemption.

Hell, we’re not sure we’d trade Cease straight up for Quintana now, never mind including Jimenez and some other minor leaguers.

At the 2013 trade deadline, when the Cubs were about to send starter Scott Feldman and catcher Steve Clevenger to the Orioles for Jake Arrieta, it was Hoyer that pushed Baltimore to throw Pedro Strop into the deal. As if landing Arrieta (who almost instantly became a completely different pitcher in Chicago, winning the Cy Young in 2015) for Feldman and Clevenger wasn’t one-sided enough, to also land Strop made this a total steal.

Strop spent six and a half seasons as a staple in the Cubs bullpen, mostly setting up, but also earning 29 saves. Other than his poor 2019 swan song in Chicago, he never had an ERA higher than 2.91 and in total, he racked up a WAR of 7.3.

Feldman made 15 mediocre starts for the Orioles before leaving as a free agent, while Clevenger appeared in a total of 69 games over two and a half seasons in Baltimore (accumulating 0.3 WAR) before he was dealt to Seattle.

It’s clear that Hoyer nailed this one, too.

Earlier in his career, when he was San Diego’s General Manager, he made yet another move that proved brilliant. When the Padres were peddling Adrian Gonzalez to Boston, the Sox were insistent that Lars Anderson be part of the trade, but Hoyer nixed that, refusing to pull the trigger unless it was Anthony Rizzo instead.

Anderson wound up appearing in just 30 big games over three seasons and he was done as a professional ballplayer after 2016. Rizzo, of course, is still going strong, and ironically he wound up with the Cubs after just one season in the bigs in San Diego. All he’s done is accumulate 34.6 of WAR in nine seasons in Chicago.

Another spot on evaluation by Hoyer. It’s clear that with him at the helm, the Cubs will be just fine — at least in terms of identifying talent. Whether they have enough funds to retain that talent may be another story.

Don’t expect this team to be adding any high-priced free agents this winter. A more likely scenario is the Cubs will wait out some free agents and seek bargain signings as we get closer to Spring Training.

Hoyer has specifically said that a complete rebuild is not being considered, but he wants to keep the team competitive even with several key stars coming up for free agency after the 2021 season. It’s definitely going to require a balancing act, and watching how Chicago deals with this situation is sure to be fascinating.

In terms of the rumour mill, Kris Bryant has reportedly already been discussed in various trade talks, including last summer when Boston was trying to land him to use in the oufield. He’s in his final year of arbitration, heading for free agency after the 2021 season, and is among the more likely candidates of the current team core to be sent packing first.

Another story to follow is which person Hoyer will peg to replace him as general manager. He’s already conceded that this hire will almost assuredly be someone currently outside the organization. Some possible candidates include Michael Hill, the former Miami President of Baseball Operations; Billy Owens, Oakland’s Assistant GM/Director of Player Personnel; and Jared Porter, Arizona’s Senior Vice President and Assistant General Manager.

In 1963, Peter Tosh, Bob Marley and Bunny Wailer formed The Wailers, who later became Bob Marley and the Wailers. In 1977, the band released its ninth album, Exodus, which featured “So Much Things to Say,” the exuberant second track on the effort. Here’s a live version of the song.

By RotoRob
This entry was posted on Saturday, November 28th, 2020 at 10:52 am and is filed under BASEBALL, RotoRob, Team report. You can follow any responses to this entry through the RSS 2.0 feed. Both comments and pings are currently closed.