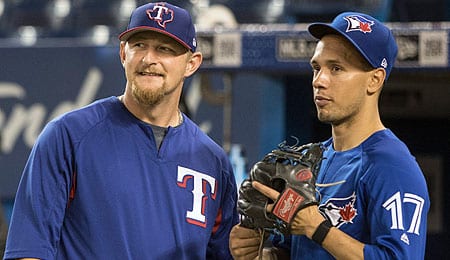 Welcome back to another week of Fantasy baseball. With the All-Star break now behind us, it’s time for you to do whatever is necessary to win your title, including dominating the wire.

This week, it was revealed that Dwight Gooden‘s long battle with drugs is still an issue; Carlos Carrasco is remaining very positive through his fight with leukemia; and Alex Bregman had to leave early Thursday after taking a ball off his smug face.

Austin Bibens-Dirkx, SP, Texas Rangers (ESPN: unowned; CBS: unowned): It’s been over two years since we last recommended Bibens-Dirkx, and shortly after that he imploded and lost his rotation gig. He saw even less action last year and began this season in Japan, where things didn’t go so well (see video below). Well, Bibens-Dirkx is back now, having recently re-signed with the Rangers and is looking quite good at Triple-A, hurling five innings of one-hit, shutout ball on Thursday. His walk rate is up a smidge, and that’s something to watch as he’s not really capable of overpowering hitters, so he’s got to survive with control and the ability to work the corners. Bibens-Dirkx has taken his share of shellackings in the bigs, but he has a chance to become relevant again as long as Texas is starting hurlers like Joe Palumbo.

Robel Garcia, 3B/2B, Chicago Cubs (ESPN: 9.7 per cent; CBS: 8 per cent): Just brought up to make his MLB debut, Garcia is already standing out from the crowd, spanking two homers in his first four games. It doesn’t hurt that he’s drawing walks at a higher clip than he did at Triple-A, either. Garcia piled up the walks at Double-A to begin the season, earning a promotion to Triple-A, where his power was off the charts. Not bad for a dude that before this season had been out of organized ball for five years.

Emilio Pagan, RP, Tampa Bay Rays (ESPN: 10.7 per cent; CBS: 31 per cent): While Hansel Robles is having a great season, right now, we think we might rather have Pagan. Despite some recent hiccups, Pagan looked flawless in closing out the Yankees last week for his fifth save. He emerged as an important cog in the A’s pen last year, but had never had a chance to close until this season, and he’s proving he can get it done as evidenced by that sweet 1.75 ERA.

Simeon Woods-Richardson, RP, New York Mets (ESPN: NA; CBS: 1 per cent): The Mets have another pitching prospect on the way, and Dynasty league owners should be aware of him. The team’s No. 4 prospect as per MetsMerizedOnline.com, Woods-Richardson is just 18 yet is already at Class-A. He’s currently on a serious roll — 2.20 ERA over the last seven starts — improving his hit rate after a rough go early on. Woods-Richardson’s K rate has slipped from Rookie Ball, but at 10.85/9 is still quite robust. This kid needs to be tracked.

Robert Plant, Jimmy Page, John Paul Jones and John Bonham comprised Led Zeppelin, the band that drove the sound that ultimately led to heavy metal. In 1976, the band released its first live album, which is the soundtrack to the film of the same name: The Song Remains the Same. From that album comes “Rock and Roll,” one of the few tracks that every member was involved in writing.

By RotoRob
Tags: Austin Bibens-Dirks
This entry was posted on Saturday, July 13th, 2019 at 11:06 pm and is filed under BASEBALL, RotoRob, The Wire Troll. You can follow any responses to this entry through the RSS 2.0 feed. Both comments and pings are currently closed.