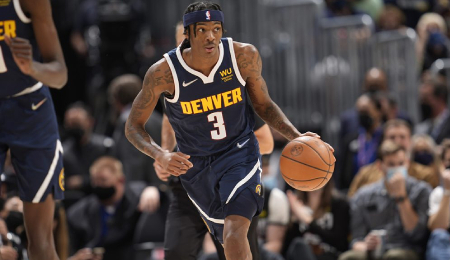 Bones Hyland is starting to pick up his offensive game. (AP Photo/David Zalubowski)

Welcome back to another week of Fantasy basketball. The Trade Deadline featured a frenzy of activity, so be sure to scope out the waiver wire for Fantasy opportunities that some of these moves created.

This week, Luka Doncic went off for a career high 51 points; Pat Connaughton busted a finger (possibly opening the door for Wesley Matthews); and the James Harden for Ben Simmons deal headlined a wild trade deadline.

Bones Hyland, PG, Denver Nuggets (ESPN: 1 per cent; CBS: 14 per cent): With Monte Morris (concussion) out, we’re getting a chance to see what Hyland can do, and so far the rookie has impressed. While he didn’t get a ton of minutes on Friday, on Tuesday Hyland went off for 22 points, six boards, four treys and three dimes, and while he hasn’t shot quite as well from beyond the arc this month, the rest of his game is trending in the right direction. Coming exclusively off the bench until Friday, he hasn’t overwhelmed in rebounding, but is doing a bit of everything. Hell, Hyland even landed a deal with Under Armour recently! If he keeps shooting the way he did on Tuesday (6-for-12 from the field, 4-for-7 from downtown, 6-for-7 from the line), he’s going to quickly become a serious Fantasy asset. Denver’s 2021 first round pick (26th overall), Hyland is very athletic and has a chance to be a nice combo guard threat off the bench in time — one capable of breaking some ankles (see video below).

Devin Vassell, SG/SF, San Antonio Spurs (ESPN: 8.7 per cent; CBS: 47 per cent): We recommended Vassell back in early November, and he proved us right by jacking up plenty of treys that month before cooling with his shooting touch in December. He bounced back with more buckets last month, and although his PT is down a smidge in February, we’re back to give him more love now based on him averaging 19 points over the last two games. Vassell is a solid on-ball defender who’s been performing as a top 35 shooting guard, so give him another look as it seems he’s going to benefit from the Derrick White to Boston trade.

Willy Hernangomez, C, New Orleans Pelicans (ESPN: 1.6 per cent; CBS: 10 per cent): Hernandez has been cleared after missing four games in Covid protocol, and while his PT had been inconsistent, he’d been putting up some solid scoring and rebounding numbers before his absence. In fact, he averaged close to a double-double last month, so if he can regularly earn 20 minutes per game, he’s capable of providing value, making him a worthwhile deep league option.

Brighton, England’s Baby Charles had a soul sound that came straight out of the ’70s, yet was recorded over 30 years later. From its only album, here’s the band’s first ever single, “No Controlling Me.”

By RotoRob
This entry was posted on Saturday, February 12th, 2022 at 11:21 am and is filed under BASKETBALL, RotoRob, The Wire Troll. You can follow any responses to this entry through the RSS 2.0 feed. Both comments and pings are currently closed.