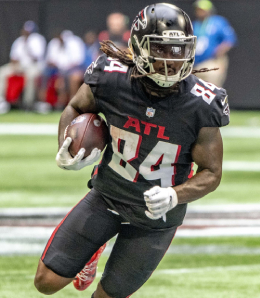 [Editor’s Note: Please join me in welcoming Cody Cook to Team RotoRob.com. He’ll be contributing both NFL and NBA content.]

Hello, everyone. We’re thrilled to be sharing our Fantasy football expertise with you all, so let’s get to it, shall we? It’s time to break down our three biggest surprises of the 2021 Fantasy football season.

1. Cordarrelle Patterson, RB, Atlanta Falcons: The biggest surprise of the Fantasy football season was Patterson finishing as the 12th highest producing running back. We knew coming into 2021 that he would be a gadget running back and receiver. Atlanta completely changed up its running back group coming into the season with moves that included bringing in heavy back Mike Davis. However, Patterson earned his targets and touches following a Week Two outburst of 18.9 Fantasy points.

Who expected that, joining the Falcons at the age of 30, he would be employed to this extent as a key piece of the team’s offense, especially after they lost Calvin Ridley in the middle of the season? Last season, Patterson began to impress us with his rushing prowess (even though his receiving left something to be desired), but this season, he earned every cent of his $3 million salary, and we don’t see how Atlanta doesn’t re-sign him for the 2022 season. We’re not along in thinking that this must be a Falcon priority this offseason (see video below).

2. Joe Burrow, QB, Cincinnati Bengals: Next up, Burrow proving his sophomore year in the NFL was no joke is a huge surprise, but we want to sneak another Bengal into the mix here — wide receiver Ja’Marr Chase. We know this might be daring to say but will Chase and Burrow lead the Bengals to a Super Bowl victory this season? They have been an amazing dynamic duo, as both LSU products produce at a high clip that defenses can’t stop.

Heading into the season, we were worried about Burrow’s knee and whether Chase’s issues with dropping balls would follow him into the NFL, but, wow, they have both proved everyone wrong. Burrow finished as a top 10 quarterback while Chase was the WR3, which is damn impressive for a rookie. They surprised us so much with their connection — earning Pro Football Focus All-Pro recognition in the process — and we can’t wait to draft them next season.

3. Najee Harris, RB, Pittsburgh Steelers: Last, but certainly not least, is Steelers’ rookie back Harris. Similar to how we perceived Chase, we didn’t expect Harris to have this big of a role in the Pittsburgh offense. As evidence, Benny Snell Jr. carried the ball just 36 times this season compared to a whopping 307 for Harris. Wow! Harris has been the bell cow back and has seemingly grabbed the RB1 role on this team for many more years to come.

We love the grind and grit he brings to the table and can’t wait to see him fly up the boards in next season’s Fantasy drafts.

Canadian rockers Rush formed in 1968, remaining active until 2018. In 1978, they released their sixth album, Hemispheres — in which the band continued to explore progressive rock — and from this effort comes “Cygnus Bringer of Balance,” Part V of the side-long classic “Cygnus X-1 Book II Hemispheres.”

By Cody Cook
This entry was posted on Saturday, January 15th, 2022 at 9:59 am and is filed under Cody Cook, FOOTBALL. You can follow any responses to this entry through the RSS 2.0 feed. Both comments and pings are currently closed.