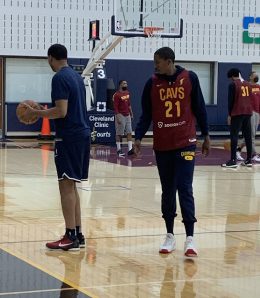 Welcome back to another week of Fantasy basketball. Suddenly, November is nearly over, meaning we’re past the one-fifth mark of the schedule. You better be using that wire to your advantage.

This week, Didi Louzada got slapped with a 25-game suspension for violating the anti-drug program; on Friday, the NBA-leading Warriors were without Steph Curry (hip), Draymond Green (thigh), Andre Iguodala (knee) and Otto Porter Jr. (foot), yet they still found a way to edge Detroit; and Kevin Durant (shoulder) missed his first game of the season on Friday.

Ed Davis, PF, Cleveland Cavaliers (ESPN: 0.2 per cent; CBS: unowned): Sure, he’s taking advantage of a depleted Cav frontcourt, so this may be very temporary, but Davis is reminding owners of his rebounding prowess this week. Starting in place of Jarrett Allen on Wednesday, he scored six points with 11 boards, a block and a steal, then followed that up the next night with seven points, 14 boards, two blocks and an assist. Davis has been a role player for several years now, but every now and then he surges onto the Fantasy radar, mostly because of his work on the glass, but also blocks (he ranks in the top 250 all-time in this category). He’s always been a lousy free throw shooter (even more so this season), but when he came out of North Carolina, his size, defense and quickness were considered major assets. Just keep Davis away from Blake Griffin (see video below).

Khem Birch, C, Toronto Raptors (ESPN: 2.6 per cent; CBS: 9 per cent): Birch lost steam in Orlando last season, but sure picked things up after a trade to Toronto. This season, he hadn’t been getting the same burn, but with OG Anunoby out for a while, Birch has been shifted back into the starting lineup. The move paid immediate dividends as Birch — mostly known as a defensive specialist — came through with 14 points on Thursday. He followed that up with a near double-double on Friday, adding four steals and two blocks. Birch could stick as a starter for the time being, so expect his bucket count to rise while he provides help on the glass and pitches in with the occasional block or two. He’s definitely a better post player than he’s given credit for, and now he has a chance to prove it.

In addition to his superb work as a musician, Roy Ayers is also known for producing his own albums… he’s one talented dude. In 1975, under the Roy Ayers Ubiquity brand, he released Mystic Voyage, which included “The Spirit of Doo Do,” written by keyboard player Edwin Birdsong, whose music has been sampled by the likes of Daft Punk.

By RotoRob
This entry was posted on Saturday, November 20th, 2021 at 12:28 pm and is filed under BASKETBALL, RotoRob, The Wire Troll. You can follow any responses to this entry through the RSS 2.0 feed. Both comments and pings are currently closed.