The Wire Troll: Filip Zadina Poised to Break Out 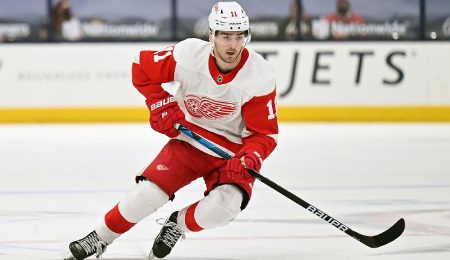 The 2021-22 NHL season is underway, so we welcome you back for another season of Fantasy hockey. As always, we gear our waiver wire selections to players that you can actually acquire, as in they are available in 50 per cent or fewer ESPN and CBS leagues. Good luck this season!

This week, Gabriel Landeskog was suspended for two games for this boarding call; Ottawa finally came to terms with RFA Brady Tkachuk; and, despite being questionable for the season opener, Alex Ovechkin scored two goals to pass Marcel Dionne for fifth all-time.

Filip Zadina, LW, Detroit Red Wings (ESPN: 1.7 per cent; CBS: 18 per cent): We’ve been waiting for the sixth overall pick in 2018 to come into his own for a while now, but Zadina sure showed flashes of it with the number of shots he attemped in the preseason. That trend continued in the season opener on Thursday as he fired three shots, picked up an assist and even recorded a takeaway. Zadina has only managed 15 career goals in parts of four seasons, but assuming he’s getting in a full season in this time (he’s yet to appear in even 50 games in any one campaign), we see a potential breakout candidate here. This Czech hunts goals (and has a tendency of finding open space as you’ll see in the video below) and, this season they will come more often, so take a flier on him now.

Arttu Ruotsalainen, C, Buffalo Sabres (ESPN: 0.1 per cent; CBS: 2 per cent): Ruotsalainen showed something in his first taste of the NHL last season, potting five goals in 17 games. And while he was a healthy scratch in the season opener Thursday, his chance has now arrived thanks to an injury to top-line centre Casey Mittelstadt that will shift Dylan Cozens up to the 1C role for now. That gave Ruotsalainen an opening to practice on Friday as the 3C with wingers Anders Bjork and Drake Caggiula. We really like the shot attempts Ruotsalainen was generating in the preseason and his numbers last year suggest he has intriguing goal scoring potential, so consider him in very deep leagues.

Evan Rodrigues, C, Pittsburgh Penguins (ESPN: 0.2 per cent; CBS: 1 per cent): Rodrigues has never been much of a Fantasy asset, but he finds himself as the 2C in Pittsburgh for now with Sidney Crosby (wrist) and Evgeni Malkin (knee) both out to begin the season. Rodrigues has justified the move so far, scoring in each of the first two games and pounding seven shots on net on Thursday. Ride him while you can, especially with word that he’s going to play on the PP1 for the time being.

Chandler Stephenson, C, Vegas Golden Knights (ESPN: 32.9 per cent; CBS: 37 per cent): Stephenson is another dude that is not necessarily a well known Fantasy commodity, but he’s really improved since coming to Vegas — especially stepping up last season. He’s playing on the top line again and has already produced two goals and an assist through the first two games, making him a red-hot pickup this week. Hell, Stephenson even kicked in four blocks in the season opener. This dude is a must-own asset now.

Reilly Smith, RW, Vegas Golden Knights (ESPN: 18.3 per cent; CBS: 38 per cent): in March, we suggested that Smith was poised for a big second half, and sure enough, he scored four goals in March, wasn’t quite as productive in April, but absolutely blew up in May (7-5-4-9). Now, with Mark Stone hurt, will Smith be bumped up to the top line for the Golden Knights? Last season was not a banner one for Smith, who had 60 points in 2017-18 and has topped 50 points four other times; we’re looking for a bounce back as long as he’s on the second line (and for now, possibly the first line).

Karel Vejmelka, G, Arizona Coyotes (ESPN: NA; CBS: 1): Who? Yes, this 25-year-old Czech rookie is a complete unknown and was a surprise as the winner of the backup goalie battle in Arizona. But with expected No. 1 goalie Carter Hutton getting absolutely shelled in the season opener, perhaps Vejmelka has a window here to steal more PT than expected if he can deliver better results for a woeful Coytotes’ squad. Vejmelka has experience being a starter overseas, so who knows? If you feel like taking a long-shot flier — especially in a dynasty format — this could be a goalie worth watching.

Robert Hagg, D, Buffalo Sabres (ESPN: 0.2 per cent; CBS: NA): Early on in 2018-19, Hagg got moved onto the top defensive pairing in Philly, earning a nod from us. He’s more or less been a depth player since, and was sent packing when the Flyers rebuilt their defense corps this summer. However, Hagg may experience a renaissance in Buffalo, as he logged second pairing minutes in the season opener, firing three shots and recording a whopping six blocked shots. Deep league owners should pay attention here.

English rockers The Who formed in 1964 and, despite several breaks, are still doing their thing today. In 1965, the band released its second single, “I Can’t Explain,” written by Pete Townshend.

By RotoRob
This entry was posted on Saturday, October 16th, 2021 at 11:48 am and is filed under HOCKEY, RotoRob, The Wire Troll. You can follow any responses to this entry through the RSS 2.0 feed. Both comments and pings are currently closed.