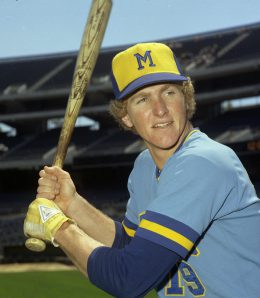 Robin Yount is clearly the greatest Brewer ever; where does Ryan Braun rank? (Doug McWilliams/National Baseball Hall of Fame)

It’s now been a couple of weeks since Ryan Braun announced his retirement from MLB.

Given that he didn’t play at all in 2021, the news was hardly a shock, but there had been midseason rumblings that he was prepping for a comeback. Of course, after Milwaukee declined to exercise a $15 million mutual option last October, Braun became a free agent. He could have signed with anyone, but the comeback talk was specifically with the Brewers.

Now, we know it’s official. A few weeks shy of his 38th birthday, Braun is done, and you can hear it from the horse’s mouth in the video below.

That got us thinking about the California native’s place among the all-time Brewer greats, and who else may join him in time.

In August 2019, it sounded like Milwaukee planned to move Braun to first base to accommodate Trent Grisham, but Braun remained as an outfielder, which is where he spent the vast majority of his career.

Braun struggled through the worst hitting season of his career in 2020, but that hardly tarnishes what he did over his time in Milwaukee. Let’s take a closer look.

After starring at the University of Miami and being drafted by Milwaukee in 2005 (fifth overall), he came up to the bigs in 2007 and spent his entire 14-year career as a Brewer, mostly as a left fielder. Braun was a six-time All-Star, the NL ROY in 2007, MVP in 2011 and he wound up hauling in five Silver Slugger awards. He finished with a career OPS+ of 134.

So his resume is great, but what effect did Braun have on the franchise? Well, put it this way: between 1993 and 2006 (the season before he arrived), Milwaukee did not have a winning record in any season and finished .500 exactly once. In the 14 years Braun suited up, the Brewers had eight winning seasons, making the playoffs five times. That sure says something, doesn’t it?

He played 1,766 games as a Brewer — fourth most in franchise history — behind only Robin Yount, Paul Molitor and Jim Gantner. Braun ranks third with 1,080 runs, fewer than 200 behind Molitor and 259 ahead of Cecil Cooper.

With 49 career triples, Braun is again behind just Yount and Molitor, but when it comes to home runs, no Brewer ever hit more. In fact, Braun finished with 101 more dingers than Yount, but it’s possible that Christian Yelich (currently 21st with 101) could challenge that mark in time, assuming he remembers how good he is.

Yount leads the franchise with 1,406 RBI, but Braun is second with 1,154. Braun slots third in walks with 586, 20 ahead of Prince Fielder, and behind only — you guessed it — Yount and Molitor.

Braun struck out more than anyone in team history, but he’s also third all-time with 216 steals — 64 up on Carlos Gomez. To his credit, Braun was an excellent basestealer at one point as evidenced by the fact he ranks just fifth in caught stealing (60), four fewer than B.J. Surhoff.

Braun also slots fourth in BA (.296), with Jeff Cirillo sitting at the top of the heap there. In terms of OPS, Braun’s mark of 891 is third, behind only Yelich (940) and Fielder.

Milwaukee has had some fantastic hitters over the years, including (beyond the aforementioned names) Geoff Jenkins, Don Money and Ben Ogilvie, but Braun’s numbers suggest he’s right up there. Perhaps he’s not in the Yount/Molitor category (really no one is), but Braun was damn close when you look at his combination of power, speed, average and on-base skills.

Pretty much anyway you slice it, Yount is head and shoulders above all Brewers, and Molitor is second. But it’s hard to suggest anyone but Braun ranks third.

In fact, Braun wound up just 9.1 behind Molitor in career offensive WAR — in 90 fewer games. To us, that speaks volumes about his place in team history. No, Braun is not likely to ever be inducted into Cooperstown, but he’s not that far off. Still, at the very least, his wife is HoF-worthy.

Among current Brewers, only Yelich is in the discussion as he was on a trajectory to be one of the team’s all-time greats, but the last two seasons have kind of clouded that idea. He still has time to get there, but we’ll need to see a lot more in 2022. Two former Brewers deserve more mention: Fielder certainly would have garnered more consideration had the Brewers not allowed him to walk away as a free agent. Finally, Richie Sexson was at his best in Milwaukee, but only lasted three and a half seasons with the team, so he’s off the table.

As for Braun, the PED suspension in 2013 certainly casts a shadow on his accomplishments to an extent, but it’s hard not to look back and marvel at what he did. For our money, he deserves to be on the Mount Rushmore of all-time Brewers, alongside Yount, Molitor and Cooper.

In 1953, one of the greatest live jazz performances of all-time was immortalized. The Quintet, which was essentially a one-off composed of five of the leading modern jazz musicians at the time — Dizzy Gillespie, Charlie Parker, Bud Powell, Charles Mingus and Max Roach (talk about a dream band!) — gave a concert at Toronto’s legendary Massey Hall on May 15, 1953. Here’s their version of the Tadd Dameron composition “Hot House.”

By RotoRob
This entry was posted on Saturday, October 9th, 2021 at 11:49 am and is filed under BASEBALL, Player profile, RotoRob. You can follow any responses to this entry through the RSS 2.0 feed. Both comments and pings are currently closed.