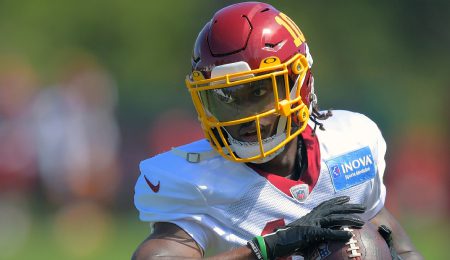 Heading into Week Five action, the waiver wire should be a feeding frenzy as a lot of young talent showcased their effectiveness while veteran players were being faded. Let’s ride.

Curtis Samuel, WR, Washington Football Team: After spending the first three weeks on the IR thanks to aggravating a groin injury, Samuel caught all four of his targets for 19 yards in his season debut (see video below) against Atlanta. With Dyami Brown exiting Sunday’s game and Logan Thomas (hamstring) currently week-to-week and still not practicing, Samuel vaulted himself into the premier middle-of-the-field receiver. Despite having his workload limited last week (37 per cent snap count), Samuel is in a smash spot. Operating 53.3 per cent in the slot with 83.3 route participation, he faces a New Orleans defense that has been gashed by slot/YAC receivers. Terry McLaurin is already off to a great start, but the return of Samuel should only help in that regard, as we projected this summer.

Dalton Schultz, TE, Dallas Cowboys: Despite losing Michael Gallup to IR, Dak Prescott and the Cowboys are averaging 31.5 points. Schultz will continue to benefit from defenses keying on CeeDee Lamb and Amari Cooper. Schultz is enjoying a breakout season, averaging 71.5 per cent snap count and 13.8 per cent target share, and that is primed to continue against a Giants defense that’s given up the fifth most Fantasy points to the TE position. He is currently the TE4 despite splitting time with Blake Jarwin, who is worthy of consideration as well. Not many saw this coming.

A.J. Green, WR, Arizona Cardinals: As the number two passing option behind DeAndre Hopkins, the death of Green has been greatly exaggerated. Green has accumulated 83.1 per cent snap count, 86.3 route participation and 18 per cent target share through four games while matching Hopkins’ stat line (15-248-2 for Green vs. 17-225-3 for Hopkins). With Hopkins nursing a rib injury over the last couple of games, we expect Green to maintain his usage against a stunted San Francisco secondary.

Van Jefferson Jr., WR, Los Angeles Rams: Jefferson Jr. has emerged as the deep threat on a potent offense, specifically in three-receiver sets, which the Rams deploy 82 per cent of the time. He has an 80.6 per cent snap count with 76.6 per cent route participation, but only a 12.9 per cent target share, albeit 17.4 yards-per-target. The target share is unlikely to change as Cooper Kupp and Robert Woods will continue to play ahead of him. This week, Jefferson Jr. draws Seattle’s putrid secondary, which allowed over 20 Fantasy points to speedy outside receivers (Zach Pascal, Justin Jefferson and Deebo Samuel). More boom than bust this week, Jefferson warrants bench consideration for the rest of the season.

George Kittle, TE, San Francisco 49ers: Despite accounting for 97.9 per cent snap count and 21.7 per cent target share, Kittle has largely disappointed in relation to his ADP. However, he is not to be blamed. First, the offensive line is banged up. Trent Williams and Alex Mack are dealing with nagging injuries, resulting in Kittle blocking more (despite suffering a calf injury himself). Second, Jimmy Garoppolo is playing extremely poorly despite the O-line overperforming in recent weeks and now, Jimmy G is hurt again). Third, the 49ers have historically favoured running the ball. Moreover, this week Kittle is likely to draw Budda Baker, who is accustomed to stifling him. It will be a touchdown or bust week for Kittle who averaged 8-136-0 against the Cardinals last season.

Kenny Golladay, WR, New York Giants: Golladay’s production on Sunday will rely on the availability of Sterling Shepard and who gets the Trevon Diggs shadow treatment. As per @Profootballdoc, Shepard and Darius Slayton are likely to miss Week Five with hamstring injuries as the pair failed to practice all last week. It doesn’t help matters that Golladay is dealing with a groin woe himself. The Giants are not likely to increase his time in the slot, opening the door for Diggs to shut him down completely. With improving but still inconsistent rapport with Daniel Jones, Golladay is a borderline WR4/sit candidate this week.

DK Metcalf, WR, Seattle Seahawks: Despite Fantasy success from receivers like Mike Evans, Michael Pittman Jr. and Green against the Rams, it’s mostly been accomplished through dinking and dunking against Jalen Ramsey. This is unlikely in Pete Carroll‘s run heavy offensive scheme as Metcalf has only cleared 10 targets once this season. The Seattle offense is likely to attack the Rams’ 22nd-ranked rushing DVOA and turn the game into a sludge match. However, Seattle’s own inept defense and the expected shootout (54.5-point over/under) offers a chance for Metcalf to be a boom-or-bust WR2 this week.

Allen Robinson, WR, Chicago Bears: The emergence of Fields has predictably eroded Robinson’s Fantasy value as a safety outlet receiver. Without Andy Dalton feeding him targets, Robinson has been regulated to option No. 3 behind Mooney and David Montgomery (although Montgomery is likely to miss time with a knee injury). Robinson has only averaged 4.5 targets with Fields compared to 7.5 with Dalton. Despite a salivating matchup against an anemic Raiders’ secondary, Mooney is likely to the premier downfield option for this offense, just like last Sunday.

JuJu Smith-Schuster, WR, Pittsburgh Steelers: After Smith-Schuster was caught mouthing “It’s a Ben problem” during the game against Green Bay, the receiver’s situation is unlikely to improve. Ben Roethlisberger is averaging a sickly 5.98 yards-per-attempt while completing just 28.6 per cent of his deep throws. Smith-Schuster is averaging just 6.75 targets in an offense that’s averaging 42.5 pass attempts, so small wonder he’s meagerly produced a line of 3.75-32-0 per game. Puke-worthy.

Here’s another gem from the 1979 classic compilation concert album, No Nukes, which features tracks from the September 1979 performances by various artists at Madison Square Garden. This is “Long Time Coming” by Crosby, Stills and Nash.

By Lucas Chan
This entry was posted on Wednesday, October 6th, 2021 at 5:14 pm and is filed under FOOTBALL, Lucas Chan, Start 'em Sit 'em. You can follow any responses to this entry through the RSS 2.0 feed. Both comments and pings are currently closed.