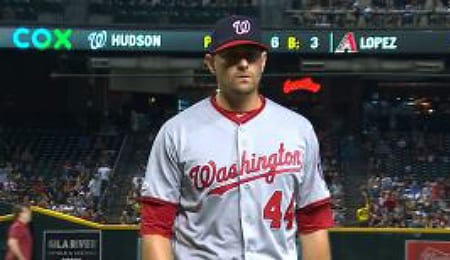 Daniel Hudson could be more valuable after getting traded. (MLB.com)

Welcome back to another week of Fantasy baseball. We’re now in mid-August, with just a few weeks remaining for you to make your move, so work that wire!

This week, Joe Panik, just released by the Giants, has been signed by the Mets and will get a chance to man second with Robinson Cano out; Bo Bichette continues to impress, setting a new MLB record with a double in nine straight games; and Josh Harrison‘s miserable season took a turn for the worse as the Tigers released him.

Daniel Hudson, RP, Washington Nationals (ESPN: 0.6 per cent; CBS: 4 per cent): Hudson was acquired at the deadline by the Nats, part of a solid bullpen makeover that was nothing exorbitant but consisted of some really smart additions. While he didn’t get much of a crack at saves in Toronto, moving to Washington should definitely help him rack up the holds. Hudson’s been quite consistent this season, steady other than a dominant June. He’s done a better job of keeping the ball in the yard, and is enjoying his finest ERA since becoming a reliever. Hudson’s velocity has also bounced back, matching his career best set in 2015. He makes for a nice addition in NL-only leagues that reward holds and is really excelling at standing inherited runners (see video below).

Pink Floyd got its start in London in 1965. In 1979, its 11th studio album, The Wall, changed the world. The lead single from the album was “Another Brick in the Wall, Part 2,” which would become Floyd’s only No. 1 single in the U.S.

By RotoRob
Tags: Daniel Hudson
This entry was posted on Friday, August 9th, 2019 at 10:34 pm and is filed under BASEBALL, RotoRob, The Wire Troll. You can follow any responses to this entry through the RSS 2.0 feed. Both comments and pings are currently closed.