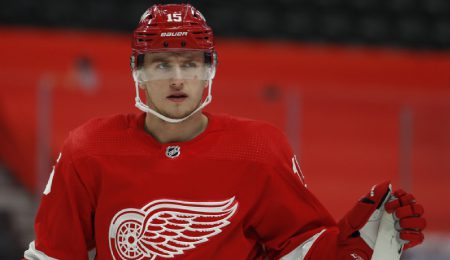 Jakub Vrana was a great addition by the Wings. (Raj Mehta-USA Today Sports)

Although the Detroit Red Wings made modest gains last season, they still missed the playoffs for a fifth straight time, the team’s longest such drought since the late-’70s to early-’80s.

The two key questions here are: is there any Fantasy gold to be found in Motown and is this team ready to compete for a playoff spot?

The answer to the second question seems to be “highly unlikely” given that the Wings are currently listed at +1200 to make the playoffs in 2021-22. For Wings fans who are lucky enough to be in Michigan and still believe the team has a chance to make it, there are some state approved sportsbooks that you can use if you want to make a bet. This page has a list that covers most of what you need to know when it comes to sports betting in Michigan. For example, there is one sportsbook that has a partnership with the Red Wings, so that might be one worth checking out.

Okay, so perhaps getting back into the chase for the Stanley Cup isn’t in the cards for Detroit next season, but that’s not to say that the future isn’t starting to look much rosier these days.

Last season, Detroit managed to avoid the division cellar by taking Columbus to overtime in the finale. The squad finished with 19 wins in 56 games after managing a mere 17 in 71 the season before, and both the offense and defense showed improvements.

In 2019-20, Detroit finished dead last in scoring, and it wasn’t even close as the next lowest scoring team averaged over half a goal per game more. Last season, the Wings still finished last in scoring, but did manage to up their rate by .16 goals per game.

However, they made even bigger strides on defense, improving from a dead last ranking in GAA in 2019-20 to 21st place last season, shaving seven-tenths of a goal per game off their average.

Hey, these are small victories, but it’s something to build on, especially given how many injuries the Wings had to key personnel.

Other great building blocks came at the trade deadline when the Red Wings sent Anthony Mantha to Washington for a king’s ransom, acquiring Jakub Vrana, a 2021 first round pick, a 2022 second rounder and Richard Panik (later flipped as part of the deal to land Nick Leddy).

This move not only set up the team very well for the future, but it also paid immediate dividends as Vraba potted eight goals in the 11 games he played with Detroit. Back in November 2019, we identified him as a budding star for Washington, and while he failed to build on his breakout 2019-20 before the deal, he sure looked the role as a Wing and seemed to really understand how this trade was a great opportunity for him (see video below). Detroit obviously felt the same way, signing the RFA to a new and lucrative three-year deal last month.

In free agency, they added veteran depth by signing hometown blueliner Jordan Oesterle away from Arizona. A few years ago, we had some Fantasy hopes for him, and he’s proven to be a capable third pairing defenseman who should further improve Detroit’s team defense.

Detroit also added to the offense by signing Pius Suter to a two-year deal. This is a nice move as he enjoyed a quality rookie campaign with Chicago, scoring 14 goals in 55 games. Just 25, Suter may have some untapped upside, and could be a Fantasy sleeper as he’s likely to slot into Detroit’s top six and get power play time.

Via trade (besides adding defenseman Leddy, who should play a major role next season), the squad also acquired Alex Nedeljkovic, who could easily take over as the team’s starting goalie.

But perhaps the most exciting development this offseason was managing to land two of the top 15 picks in the draft.

With its own pick (sixth overall), Detroit picked Swedish defenseman Simon Edvinsson, a big and physical blueliner who’s been compared to Seth Jones. The Wings now have a couple of potential impact defensemen in the pipeline, making the future on the blueline look very promising.

Detroit then dealt picks 23, 48 and 138 to Dallas to move up to the 15th slot, which was used to take the top goalie available, Sebastian Cossa, from the WHL. A huge and athletic kid, he could be a vital cog in the Wing rebuild as the future franchise netminder.

Adding this pair to a prospect pool that includes defenseman Moritz Seider (sixth overall in 2019), forward Lucas Raymond (taken fourth overall last year), and winger Jonatan Berggren (33rd overall in 2018) gives Detroit fans a hell of a lot to look forward to in the coming years.

Okay, so it may not happen this season, but the Wings’ streak of missing the playoffs is on track to end soon, with the promise of a very strong team down the line.

In 1994, Blue Plate Music released a compilation album called Upfront! that features live performances by Canadians artists that have appeared on the radio series Mountain Stage. From this disc comes The Rankin Family performing “Feir a Bhata,” a tune which was previously unreleased.

By RotoRob
This entry was posted on Wednesday, August 25th, 2021 at 3:14 pm and is filed under HOCKEY, RotoRob, Team report. You can follow any responses to this entry through the RSS 2.0 feed. Both comments and pings are currently closed.