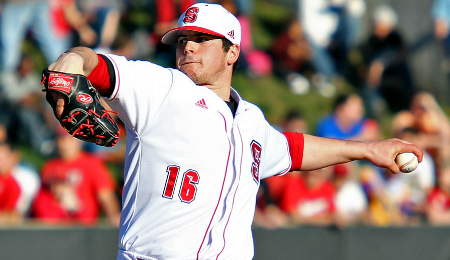 And we’re back, with more of our 2014 MLB Draft analysis, today focusing on the teams in the American League Central.

The Skinny: Rodon, who proved he can get it done on the big stage (see video below), gets all the headlines and accolades and rightfully so, as the southpaw was one of two Wolfpack players chosen by the Pale Hose in their first four selections. Fortunately, the Sox were able to sign the Scott Boras client before the deadline so Rodon can now begin his professional career. Adams, who has also been signed, is no slouch either at No. 44. He is a stellar athlete who excelled in basketball in high school and was rated as Baseball America’s No. 23 prospect, so he is a definite steal in the second round. Austin not only has a good rapport with Rodon as his college catcher, but the switch-hitter led NC State with a .344 batting average last season.

Bottom Line: Thankfully, concerns over whether Rodon will sign were unfounded, and while Chicago stocked up on pitching with 12 of its first 20 selections, it also reached for a number of players, including two-way player Zach Thompson, the team’s fifth-rounder out of the University of Texas. Rodon will go a long way towards determining the success of this draft.

The Skinny: This was a chance for the Indians to build some organizational depth, and it appears GM Chris Antonetti did not miss the boat here. Cleveland had four of the first 61 picks when you include compensation-round selection Mike Papi, an outfielder out of the University of Virginia. Zimmer, the younger brother of KC pitching prospect Kyle (the No. 5 overall pick two years ago) projects as a line-drive hitter with potential power upside. Sheffield is a polished lefty with three solid pitches, while Hockin, the grandson of Hall of Famer Harmon Killebrew, offers a similar arsenal with a keen ability to throw strikes.

Bottom Line: We would define this as the prototypical “solid if not spectacular” draft class for Cleveland, with more substance than flash. There is plenty of upside with many of the Indians’ top choices, especially Zimmer and Sheffield. Cleveland did not overload on pitching as some teams had a tendency to, but it need make no apologies.

The Skinny: The Tigers landed a highly talented outfielder in Hill, the first non-pitcher taken in the top 30 picks by Detroit since 2005 when it selected Cameron Maybin. Hill compares to the man he models his game after, current Tiger Torii Hunter, which will certainly excite the fanbase. Turnbull has strong upside but could project as a late-inning reliever down the road because his command is a concern at the moment. Greiner could be a third-round steal at 6’6” despite a lack of power. He has gap-to-gap ability, good polish and knows how to handle a pitching staff.

Bottom Line: This wasn’t a sexy draft for Detroit by any means, but it got some talented players near the top, especially Hill. If Turnbull and Greiner develop, the Tigers could have a deep farm system for years to come.

The Skinny: How many winless, 5’11” pitchers can excite fans or scouts? Finnegan may have been 0-8, but he is a worthwhile first-round talent. He has good life on his mid-90s fastball, a fast-improving slider and has upside as either a starter or late-inning reliever. Vallot has good pop and may end up at a corner outfield spot, but his strong arm and solid defensive skills mean he’s no lock to shift out from behind home plate. Skoglund is another projectable lefty, at 6’6”, 170 pounds, who consistently throws strikes and could develop into a solid starter down the road.

Bottom Line: There is nothing flashy about this draft class, and even with the selections of Finnegan, first-round pick Foster Griffin out of The First Academy (Florida), second-round pick Scott Blewett out of Baker HS (New York), and Skoglund, the Royals ended up with more position players than pitchers. But give KC credit for getting quality arms at the top of its draft, as those could go a long way towards keeping the organization flush with young hurling talent for years to come.

The Skinny: This wasn’t a powerhouse draft class in terms of shortstops, but the Twins got the cream of the crop in Gordon, the son of former Major Leaguer Tom and the brother of current Dodgers’ second baseman Dee. Nick has good speed and the ability to hit to all fields and once he polishes his game could develop the same way Dee has in 2014. The Twins also got first-round talents with some other picks in Burdi, a flame-throwing righty whose stock dropped due to a poor senior season, and Cederoth, another hard thrower who hopes to follow in the footsteps of SDSU alum Stephen Strasburg. Even Clay comes highly touted, as he was a two-sport star in high school (also excelling in football). The southpaw likely projects as a reliever.

Bottom Line: Minnesota got some very talented players early in its draft, as Burdi, Cederoth and Clay all could have gone in the first round and no one would have been shocked. Between Gordon and the three talented arms, the Twinkies pulled in quite a haul, assuming everything goes according to plan.

Now it’s your turn. Let us know in the comments below what you thought of the 2014 draft classes for the American League Central squads.

By Michael Seff
Tags: AL Central
This entry was posted on Saturday, July 12th, 2014 at 8:49 pm and is filed under BASEBALL, Draft report, Michael Seff. You can follow any responses to this entry through the RSS 2.0 feed. You can skip to the end and leave a response. Pinging is currently not allowed.