The Wire Troll: Zack Collins Back in the Bigs 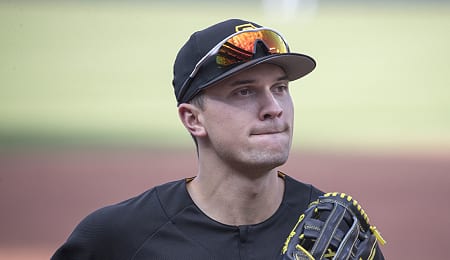 Adam Frazier is headed for a big finish. (Keith Allison)

Welcome back to another week of Fantasy baseball. Now that we’re into September, the wire is virtually tapped out, so this marks the final column of the 2019 season. Stay tuned for our 2019 Wire Troll All-Star team, coming soon.

This week, Giancarlo Stanton (knee) hit in a simulated game as he nears his return; Brian Morin became the first pitcher in history to face his brother (Colin) in his MLB debut, whiffing him, to boot; and former Dodger GM Ned Colletti has a new job — working as a scout for the San Jose Sharks of the NHL.

And now, here is our final batch of Fantasy baseball waiver wire recommendations for the 2019 season…

Zack Collins, C, Chicago White Sox (ESPN: 0.2 per cent; CBS: 4 per cent): After being a Southern League All-Star last year, Collins took his game to a new level at Triple-A this year, hitting better than ever, and even showing a bit of speed for the first time. But when he was recalled to the Sox in June, he really stunk it up. Well, with rosters expanding, Collins is back now and is holding his own so far with a pair of hits (including a triple), a run, a ribbie and four walks. There’s serious raw power here, but it has yet to translate into game action, so that’s something to watch as he matures. But we love Collins’ chances of racking up nice runs for a catcher given his tremendous on-base skills. Ultimately, he projects as a strong-hitting backstop, but could wind up as a 1B/DH type, which will severely affect his Fantasy value. For now, he’s worth starting down the stretch to see how he handles his second taste of the bigs.

Adam Frazier, 2B/OF, Pittsburgh Pirates (ESPN: 34.2 per cent; CBS: 26 per cent): Looking for a hot bat down the stretch? Frazier has been killing it lately, going 2-for-3 with a walk, a run and a two-run triple Friday to cap off a week in which he hit over .450. He’s actually not getting on base at quite the same clip as last year and his extra-base power has dipped, but with more action than ever, he’s topping personal bests in several counting cats. Frazier has some sweet mechanics, as you can see in the video below.

Julio Urias, SP/RP, Los Angeles Dodgers (ESPN: 11.5 per cent; CBS: 41 per cent): Urias is going to get another start on Sunday, and could work his way into the postseason rotation mix. He’s closing in on a career high in innings pitched, and while we’d like to see him get back to his groundball ways from his first few seasons, it’s hard to argue with his success this year.

Phillip Ervin, OF, Cincinnati Reds (ESPN: 0.6 per cent; CBS: 2 per cent): With Nick Senzel (shoulder) hurting recently, Ervin has been getting the starts in centre field, and while he hasn’t exactly been hitting the cover off the ball, he’s at least been drawing walks. Ervin has actually hit better this year, even if his line drive rate is down. Still, while he’s starting, he needs to be used in NL-only formats.

Noelvi Marte, SS, Seattle Mariners (ESPN: unowned; CBS: 2 per cent): Looking for the next big thing in your dynasty league? Take a look at Mariner shortstop Marte, evidence of the team’s improved international scouting in recent years. The 17-year-old Dominican tore up the DSL this year, and finished the campaign on a crazy run, batting .538 over the final 10 games. Marte led the league in total bases and RBI, but he’ll need to sharpen his fielding. Still, you’re going to be hearing a lot about this kid next year.

Billy Hamilton, OF, Atlanta Braves (ESPN: 42.7 per cent; CBS: 17 per cent): Lo and behold, Hamilton has reemerged with Fantasy value in Atlanta. While he isn’t playing a ton, he’s been hitting well and doing a great job on the basepaths. Hamilton may only be a part-time player now, but still offers value in NL-only leagues because of his speed. He’s been seeing more fastballs this year, and struggling with them, but has improved against sliders, changeups and curveballs. Hamilton looks like he may really help the Braves down the stretch.

Ben Zobrist, OF/2B, Chicago Cubs (ESPN: 10.6 per cent; CBS: 7 per cent): Zobrist is back, and he should get regular PT with Javier Baez possibly done for the season. Zobrist had a hit, a walk and two runs in his first game back and then went 3-for-3 with three runs and two walks in his next game. He’s been seeing more changeups than ever this season, and while his extra-base pop has all but disappeared, he’s still managed to remain a productive player. And then there’s that positional flexibility.

Bruce Frederick Joseph Springsteen has been one of the more important musicians over the last five decades. In 2003, he released the Essential Bruce Springsteen, part of Sony BMG’s Essential series of releases. From this effort comes “4th of July, Asbury Park (Sandy)” originally from The Wild, the Innocent & the E Street Shuffle. This classic is often simply called “Sandy.”

By RotoRob
Tags: Zack Collins
This entry was posted on Sunday, September 8th, 2019 at 8:52 pm and is filed under BASEBALL, RotoRob, The Wire Troll. You can follow any responses to this entry through the RSS 2.0 feed. Both comments and pings are currently closed.