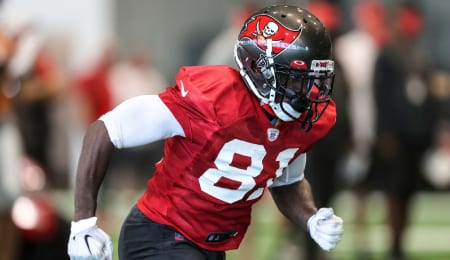 How about that Christian McCaffrey call? Those holding onto him still should consider dropping him for the bench spot. If you were fortunate to move forward in your Fantasy playoffs, we at RotoRob.com will be with you the whole way (we made it too!).

Here’s our start/sit recommendations for Week 15… best of luck!

T.Y. Hilton, WR, Indianapolis Colts: “Joker” Hilton has averaged nine targets, 6.5 catches, 98 yards and 1.5 touchdowns over the last two games as well as earning a 65.5 WOPR score (see video below for one of his two scores in Week 14). Fantasy owners should expect him to be a centrepiece in the eventual shootout against Houston.

Antonio Brown, WR, Tampa Bay Buccaneers: Following its bye, we expected Tampa Bay to play at a high level and also to finally present some structure for Fantasy owners. However, the Bucs underwhelmed us. We still don’t understand HC Bruce Arian‘s offensive philosophy this year nor do we understand Tom Brady‘s wacky post-snap reads, but we sure know Brady kissed AB on the lips before tucking him in. Count on Brown one last time.

Cam Newton, QB, New England Patriots: We hit the bull’s eye on Newton last week when we advised sitting him, but this week we say start him. No doubt the Patriots are better when he doesn’t throw the ball which is why Miami is the optimal defense for the Patriots. Even in this first matchup, Newton threw 19 times for 155 yards and no touchdowns, but churned out a win by rushing 15 times for 75 yards and two touchdowns. Consider him a viable streamer as long as your expectations are not too high.

Dan Arnold, TE, Arizona Cardinals: The body bag part two hit Philadelphia last week as DE Josh Sweat, LB Malik Jackson, DE Derek Barnett, CB Darius Slay, DB Rodney McLeod and CB Avonte Maddox all exited the game and were unable to return. Their collective statues are up in the air, making them vulnerable to the Cardinals’ dual-threat assault. We expect Kyler Murray to be able to move up and down the field thereby making Arnold — who has scored three times on seven targets in the last two games — a viable streamer.

Raheem Mostert, RB, San Francisco 49ers: After being evaluated for a concussion, Mostert returned to the game, but continued to split snaps with Jeff Wilson. While Fantasy owners should be concerned about Mostert’s lingering injury, San Francisco enters must win territory to keep its playoff hopes alive. It is convenient that Dallas’ anemic run defense is on deck.

Deshaun Watson, QB, Houston Texans: Watson’s career drop-back splits with Will Fuller on the field: 728 plays, 126.7 EPA; without Fuller: 855 plays, 34.7 EPA. Fuller might not have had a big role until this year but his presence on the field matters to Watson. This trend is palpable as Watson averaged 280 yards, 0.5 touchdowns and 0.5 interceptions in the last two games. While the Colts are vulnerable after losing Xavier Rhodes, we doubt if Houston has the firepower to keep up.

Tyler Lockett, WR, Seattle Seahawks: Since Lockett’s blow up game in Week Seven, he has averaged five catches for 50 yards and 0.14 touchdowns. By contrast, D.K. Metcalf has averaged 6.4 catches, 95 yards and 0.71 touchdowns. Lockett is on the back burner, especially when “LetRussCook” isn’t working. Fantasy owners should be concerned about Lockett’s previous leg contusion and his general reliability through Fantasy playoffs.

Miami Dolphins D/ST: As we alluded to above, Newton is a different animal when it comes to stifling an offense. Miami’s biggest strength — its DB talent — is crippled by the Patriots game-plan of limiting him to fewer than 20 throws a game. Instead of playing their usual nickel and dime defense, the Dolphins might be forced into a heavier package to stop the effective run game.

Justin Herbert, QB, Los Angeles Chargers: It is appalling that Herbert, a diamond in the rough, was gifted to the Chargers organization and his rookie year is being wasted because his idiot HC Anthony Lynn keeps having the offense run the damn ball. Is it so freaking hard to give Herbert more playing play in a lost season so he’d be better prepared next season? What a joke.

Ronald Jones III, RB, Tampa Bay Buccaneers: We expect negative game-script for Tampa Bay despite being the favourite and that means Brady will be passing a lot for long yards. Jones is likely to get his 14 odd touches on the ground, but his effectiveness is called into question against a stingy Falcon run D.

English pop band ABC got its start in 1980, and other than a six-year break in the ’90s, is still going strong today. In 1982 it had three top 10 hits, including “Poison Arrow,” the second single from The Lexicon of Love.

By Lucas Chan
This entry was posted on Monday, December 14th, 2020 at 9:09 pm and is filed under FOOTBALL, Lucas Chan, Start 'em Sit 'em. You can follow any responses to this entry through the RSS 2.0 feed. Both comments and pings are currently closed.