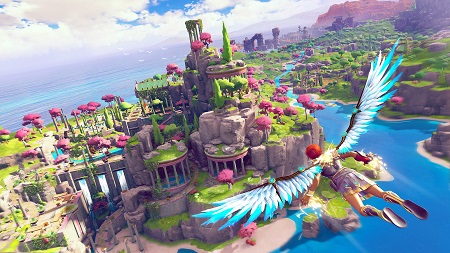 Immortals‘ colourful world is loaded with things to do.

It’s been a busy final quarter for Ubisoft, which already released new installments in both the Watch Dogs and Assassin’s Creed series. To close the year, however, the publisher is offering gamers a brand new IP with Immortals Fenyx Rising, an open-world action-adventure game that clearly takes some cues from Breath of the Wild and pairs them with some distinctly Ubisoft elements. Time to find out if that mix produces a quality product.

As Fenyx you have access to an ever-expanding array of attacks and powers, which can make the controller a busy place. The basics handle well with weak/strong melee attacks on the right shoulder/trigger and ranged on the left trigger. The left bumper operates as a modifier with your special godly abilities then mapped to the face buttons. You can also jump, dash and parry. Time the latter two well and you’ll slow time, filling their stun meter and opening up your enemy to counter attacks.

All of it works very effectively with the exception of parrying, which is done by pressing both bumpers simultaneously. It felt awkward when we’d played two hours, and it still felt awkward when we’d logged north of 40, so much so that we relied on dashing away from attacks almost exclusively. Even beyond the weird way it felt on the controller, it just didn’t seem viable when tangling with multiple enemies, most of whom have at least one unblockable attack.

Immortals features a really colourful and diverse world, effectively walking the line between dangerous looking enemies and the overall whimsical vibe. Your version of Fenyx is customizable and a diverse set of armours and helms offer further means of changing your look. Played on the Xbox One X, the performance was smooth with no notable dips in the frame rate regardless of how many enemies you face at once. On the downside, the numerous vaults of Tartaros end up being quite repetitive.

Narration is your frequent companion in Immortals as the game unfolds as though Prometheus is telling the story of your heroic journey to Zeus. It’s primarily played for gags with plenty of modern phrases worked into the story. In that respect it’s almost the polar opposite of Sony’s God of War, which draws on the same material but in a very dark fashion. Other elements, such as music and sound effects, are solid.

Imprisoned by the gods, the monstrous Typhon escapes and successfully severs the essence of multiple gods, waging war on Olympus. As a survivor of a shipwreck, a simple shield bearer by the name of Fenyx washes up on the Golden Isle only to find everyone else turned to stone, including her brother. With the aid of Hermes she sets out on a journey to restore the gods and save humanity by defeating Typhon.

While that may sound straightforward, rest assured that finishing it will require the completion of dozens and dozens of missions, which — when combined with loads of side quests and collectibles — can easily push play time well past 50 hours. In that sense the game can feel a bit overwhelming at times, though the flip side of that is there’s always something you can accomplish regardless of how much time you have.

At its core, Immortals can be divided into three sections: combat, exploration and puzzles. While the first two elements work quite well, the puzzles don’t measure up, especially when you consider how prevalent they are. Time after time you’ll be asked to carry an object onto a pressure switch or find a way to ignite an unlit brazier. Sure, they’re rearranged and contain various wrinkles, but they get repetitive long before you stop encountering them. That’s an issue since the item needed to upgrade your stamina is found in the puzzle-heavy vaults.

Stamina is a central mechanic of exploration as activities like climbing, swimming and gliding all erode the meter — if it runs out you’ll be taken back to a safe spot and lose some life. You can work around it to some extent by consuming potions and upgrading equipment, but you’ll need to bite the bullet eventually and tackle the vaults. Stamina also comes into play with combat when using godly powers, including the ultra-useful Apollo’s arrows.

Where Immortals really shines with exploration is how many items there are to collect and how each is unique to its upgrade, making you want to open every chest you find. Ambrosia is used to increase your health meter, Zeus’ lightning boosts stamina, different coloured gems increase carrying capacity or are used to upgrade weapons and armour, and so on. Various challenges scattered around the map grant Coins of Charon that are used to unlock upgraded abilities. It’s all well designed and addicting.

Combat is solid and affords different ways to go about defeating your enemies. For instance, you can land sneak attacks or unleash guideable arrows that detonate on headshots and inflict splash damage. A few of the high-end foes proved annoying (damn you, Achilles!), but we were always able to overcome them and the mix of enemy groupings helped keep things fresh.

Immortals Fenyx Rising boasts a beautiful world absolutely teeming with things to do. Both the combat and exploration are consistently enjoyable, even if the repetitive, time-consuming puzzles sometimes grind the game’s momentum to a halt. Immortals ranks a strong recommendation for anyone looking for a new fantasy action-adventure game to sink some serious hours into.