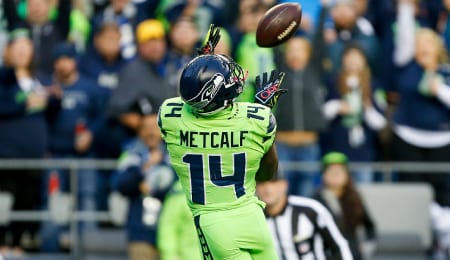 As the Fantasy playoffs begin, we at RotoRob.com are right here with you as we shored up the second and third place in our FFPC best ball tournament. Fantasy was definitely not kind this year even without Covid-19 and unlike last year when the points were unevenly distributed to the top players (Dalvin Cook, Travis Kelce, Lamar Jackson), this year presents a lot of waiver and free agent best ball opportunities.

We recommend you to look through the free agent pool to replace players we recommend sitting, and at the same time, lock in the players on our Start ’em list. If you’re still in the hunt, good luck!

Travis Kelce, TE, Kansas City Chiefs: Kelce is an oasis among the drought in the tight end Fantasy landscape this year. He has an incredibly soft matchup against a vulnerable Miami middle-of-the-field defense and while the Dolphins have been prolific in stopping boundary receivers, they will struggle to contain Kelce — a man that knows how to celebrate (see video below).

DK Metcalf, WR, Seattle Seahawks: Metcalf is proving to be every bit worthy of his third round Fantasy projection and has a dynamite matchup against a bottom-five Jets defense featuring CBs Bryce Hall and Lamar Jackson. Metcalf has been especially effective against man coverage, leading the league in yards against single coverage.

Ryan Tannehill, QB Tennessee Titans: Tannehill is playing out of his mind despite losing to Cleveland. Third in EPA per play (behind just Aaron Rodgers and Patrick Mahomes) and seventh in yards per pass attempt, Tannehill enters the final and easiest leg of Tennessee’s schedule looking set to ball out for the rest of the season. Against the Jaguars defense this week, expect Tannehill to go nuclear.

Stefon Diggs, WR, Buffalo Bills: Diggs is a top 10 Fantasy wide receiver in a pass-happy offense led by Josh Allen. Second in targets and seventh in receptions, Diggs represents one of the few ways to move the ball against the stout Steelers’ defense. Things will be especially limited without underrated WR John Brown and Buffalo has proven it will abandon the run if the matchup is right.

Kenyan Drake, RB, Arizona Cardinals: Drake returned to his sludge-like Fantasy-self as he mustered 10 carries for 49 yards with one reception for nine yards. Salvaging his day with a touchdown, he’s on course for a bounce back game against a Giants’ defense that’s stiff on the pass and soft on the run. Frustratingly, Chase Edmonds will have a big role and eat into Drake’s playing time if Arizona falls behind.

Tyreek Hill, WR, Kansas City Chiefs: Hill fell back to earth last week against the Broncos, managing just six receptions for 58 yards. This trend is likely to continue as the Chiefs roll into Miami. Ranked 15th in allowing explosive plays (similar to the 14th-ranked Broncos), the Dolphins are likely to prioritize Hill and his burners. At the behest of HC Andy Reid, Patrick Mahomes is learning to take a step back. This game should be won on the backs of Chiefs’ RBs Clyde Edwards-Helaire and Le’veon Bell. We expect Hill to be a touchdown-dependent high end WR2.

Cam Newton, QB, New England Patriots: Newton made his excuses and managed to score a huge win despite only completing 12-of-19 passes for 69 yards and one touchdown. Running 14 times for 48 yards and two touchdowns only masks the real problem: the Patriots win when Newton doesn’t throw. The Rams’ pass defense is ranked second at allowing Fantasy points for quarterbacks. Have Cam take a seat.

Kyler Murray, QB, Arizona Cardinals: Murray has not been playing well recently. The Hail Mary to DeAndre Hopkins, while admittedly beautiful to any football purist, masked a lot of problems on the offensive side of the ball. And since reports of his “minor” injury suffered against Seattle, Murray has not had a rushing touchdown or more than 60 yards on the ground. We have no doubt that the Giants’ pass defense can absolutely shut down Arizona’s passing game as they did to Seattle.

Alvin Kamara, RB, New Orleans Saints: Kamara lands himself on the sit list this week because of his splits with Drew Brees. Under Brees, Kamara averaged seven receptions on eight targets for 65 yards in the air. Without him over the last couple of weeks, Kamara has only averaged 1.5 receptions on five targets for seven yards. The touchdown upside took a hit as well, with him averaging one touchdown per game with Brees, versus one total score over the last two games. We need to temper our expectations, especially now that Michael Thomas is back in the fold.

Christian McCaffrey, RB, Carolina Panthers: McCaffrey has been a liability and a drag for Fantasy owners (us included) and while there is optimism for his return for the final games, you should consider the prospect that the organization may just pull its star RB from a lost season. We also argue that even if CMC does play, what would be his touch count? Can he even be reliable after two injuries, one of them being a high ankle sprain? Those banking on McCaffrey for the Fantasy playoffs should be wary.

Mostly consisting of Canadians, The Band got its start in 1968, remaining active until 1999, with a six-year break beginning in the late ’70s. In 1972, it released a live album, Rock of Ages, and from this comes “Across the Great Divide,” a Robbie Robertson-penned tune that first appeared on the 1969 eponymous record.

By Lucas Chan
This entry was posted on Wednesday, December 9th, 2020 at 7:50 pm and is filed under FOOTBALL, Lucas Chan, Start 'em Sit 'em. You can follow any responses to this entry through the RSS 2.0 feed. Both comments and pings are currently closed.