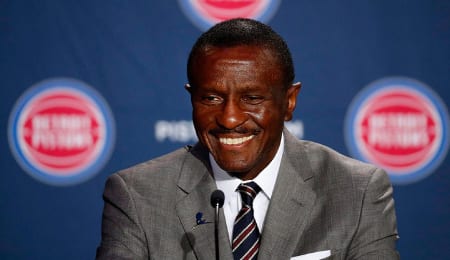 Dwane Casey didn’t have much to smile about in Detroit last season. (Paul Sancya/AP)

In winning just 20 of 66 games last season, the Detroit Pistons suffered through their worst campaign in over a quarter century. Things really went downhill over the final few weeks as Dwane Casey‘s crew lost its last five games and 12 of its final 13 as part of a 4-19 stretch to close out the schedule.

Detroit really seemed to be playing out the string at the end. In its penultimate game, it blew an early lead and was then limited to a season-low 13 points in fourth quarter in yet another loss.

In fairness, the team had shifted into youth mode, dealing or buying out most its high-priced veterans (at least the ones that weren’t hurt, that is), so it’s really hard to blame Casey, who’s generally done well in his coaching career (as long as he does’t have to face LeBron James — see video below).

Going forward, after averaging more points than just five teams in the entire association, the Pistons definitely need an offensive boost. But what they need more than anything is a bolt of energy to spark a resurgence.

Could that come in the form of projected No. 1 overall pick LaMelo Ball? Detroit currently holds the No. 7 pick (its highest draft position since taking Greg Monroe seventh overall in 2010), but reports suggest the team is interested in moving up. This year’s draft class may not include a generational talent, but somehow managing to trade up and land the top pick would go a hell of a long way towards returning this team to relevance.

During his brief time with the Pelicans in 2018-19, Christian Wood hinted at his potential (yet for some reason, they cut him), but we really got to see what he’s capable of last season — especially after January. Set free to see full-time minutes, he averaged 19 points and nine boards in February and then exploded in March to the tune of 26.6 points and 9.4 boards per game. It’s a shame the pandemic halted the season, because Wood was truly enjoying a coming out party (if his team was mailing it in, he didn’t get the memo), scoring at least 20 points in each of the final five games (and seven of the last eight). To give you an idea of how he was taking it to the next level, consider that he had a career-high 29 points on March 4; three days later, he potted his first ever 30 point-game, and then he set yet another personal best with 32 points in what turned out to be the season finale. Small wonder Wood made our Wire Troll All-Star team. Detroit really needs to re-sign this free agent as he’s proved he’s a building block.

Derrick Rose actually had a pretty decent season (when he played), but his ability to stay healthy and play big minutes is a real issue relative to the Fantasy draft capital required to acquire him. Two seasons ago, he enjoyed a career-best showing from beyond the arc, but was unable to take those gains with him to Motown, and that also put a dent in his Fantasy value. With Detroit in clear rebuild mode, it will be interesting to see if D-Rose is still around when the next NBA season begins in late-December.

It may be unfair to characterize Blake Griffin‘s season as ugly. However, once he returned after missing the first few weeks of the season, it was clear that he was trying to play through serious knee discomfort and it was significantly affecting his performance. He finally succumbed to season-ending surgery on his left knee in January, winding up with his fewest three-pointer per game since coming to Detroit, contributing to a career-worst 15.5 PPG. Griffin’s knee woes punched a massive holes in many a Fantasy teams’ plans, but just under two years ago, he was still a massive force. Now, this is another player that may not be around much longer given the Pistons’ rebuild situation.

American Chicago soul band The Impressions formed in 1958, and continued performing until 2018. In 1974, they did the soundtrack for the Blaxploitation film, Three the Hard Way. From that effort, here’s the funky “Make a Resolution.”

By RotoRob
This entry was posted on Saturday, November 7th, 2020 at 10:35 am and is filed under BASKETBALL, Good Bad and Ugly, RotoRob. You can follow any responses to this entry through the RSS 2.0 feed. Both comments and pings are currently closed.