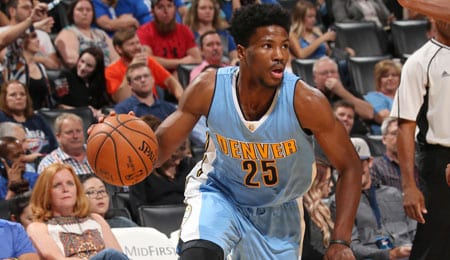 Welcome back to another week of Fantasy basketball. With Brett heading out west to scout the Edmonton Oilers, the Troll falls to your trusty editor this week. With the second half underway, we’re nearly into the homestretch. Keep milking that wire, peeps.

This week, James Harden continued to play at an MVP level, recording his third 40-point triple double in the last six games; Dallas sixth man J.J. Barea has a torn Achilles’ heel that will sideline him for the rest of the season and open more PT for rookie Jalen Brunson; and Ben Simmons again thinks the Sixers are too soft.

Malik Beasley, SG, Denver Nuggets (ESPN: 0.2 per cent; CBS: 15 per cent): With Gary Harris out, Beasley has been getting a chance to start and the 2016 first rounder has finally landed on the Fantasy radar as a result. On Saturday, Beasley scored 21 points and on Thursday, he scored 15 points with five assists, three treys, two assists and a block, and while he doesn’t help in rebounding, he’s been doing a bit of everything else lately. His PT has been steadily rising all season, and barring injury, he should easily set a new career high in games played. Harris isn’t out long term, and really could be back very soon, but for now, Beasley is making a case for more PT in the second half. Remember, Beasley scored nearly 16 points per game in his one and only season at Florida State. There’s a pedigree here…

Bam Adebayo, C, Miami Heat (ESPN: 3.4 per cent; CBS: 48 per cent): Starting in place of Hassan Whiteside (illness) on Saturday, Adebayo put up a double-double with two steals and a block. Adebayo’s FT shooting has been better lately, and he’s been getting to the line a bit more in January. He should appear in more games in this, his second NBA season, and Miami’s 2017 first rounder has developed nicely. Dynasty league owners should really track BA; he’s poised for a big breakout next season, especially with Whiteside’s contract expiring after 2019-20, making him a trade candidate next season.

Kevin Huerter, SG, Atlanta Hawks (ESPN: 0.2 per cent; CBS: 39 per cent): Don’t look now, but Atlanta’s first rounder from last season is starting to pay major dividends. In 39 minutes on Friday, Huerter went off for a career-high 29 points with five three-pointers, three assists and two steals. His minutes are way up lately (36.5 MPG over the last five), and he’s been sinking more and more buckets as the season has gone on. How about Huerter’s 38 per cent season percentage from beyond the arc? The dude was the man at Maryland, but not really a household name nationally. But the way he’s filling it up from downtown, he seems driven to change that now that he’s a pro.

Maxi Kleber, PF, Dallas Mavericks (ESPN: 0.2 per cent; CBS: 4 per cent): Kleber is another dude that has suddenly thrust his way into Fantasy relevance, recording back-to-back 13-point games while flirting with a double-double in the first of those. He’s blocking shots and showing an ability to hit the three-ball, too. Kleber has been starting with Dennis Smith Jr. out and has become an instant DFS darling because of his low salary and high production. Kleber has been sinking more buckets recently — despite getting fewer touches so far in January. The German got an opportunity to start more last season, but if he can stick in the starting five in the second half, he could be a real find down the stretch. A dude with his size, skill and ability to move should have your attention if the PT is there.

American singer Stevie Wonder is a legend among the soul community. In 1976, he released his 18th album, Songs in the Key of Life, a double LP that went on to become his best selling piece ever. It spawned five singles, the third of which was released in 1977 — “Sir Duke,” a tribute to Duke Ellington, who had died three years earlier.

By RotoRob
Tags: Denver Nuggets, Malik Beasley
This entry was posted on Sunday, January 13th, 2019 at 1:35 pm and is filed under BASKETBALL, RotoRob, The Wire Troll. You can follow any responses to this entry through the RSS 2.0 feed. Both comments and pings are currently closed.