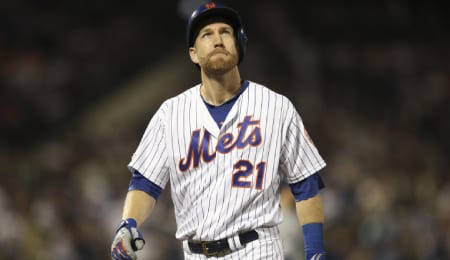 In watching the 2020 MLB playoffs, it’s become quite clear that homers, walks and strikeouts are more prevalent than ever. Perhaps the universal DH has helped usher in this change, but we’ve never experienced a time in history when baseball’s three true outcomes have been more common.

The A’s smoked 12 homers in their four-game series again Houston — yet lost; Giancarlo Stanton homered in five straight playoff games, becoming the first Yankee to do so; meanwhile, in Game Two of the Rays-Yanks series, Tampa Bay pitchers whiffed 18 batters in nine innings, becoming the first team in postseason history to do that; and over the 18 games played in the Wild Card round, there was a total of 382 whiffs.

In perusing Deer’s similarity scores, the active player that most resembles him is Todd Frazier, who’s currently in his second tour of duty with the New York Mets — a stint that may be coming to a close if the team decides to decline its 2021 option.

A supplemental first round pick (34th overall) out of Rutgers by Cincinnati in 2007, Frazier likely peaked in 2014, when he showed his best instincts, had his best speed year (20 thefts), flashed really good hands and even better release on his throws, solid arm strength and by far his best accuracy. He was a well above average player that season, putting up a career-high 4.5 WAR.

When we last checked in on Frazier in mid-April 2019, he was injured and had yet to make his season debut, while the Mets were off to a great start without him. Just over a week later, he returned, but struggled from the outset before enjoying a better showing in May and then really heating up in June. Frazier then cooled for a couple of months before finishing strong.

All told, 2019 was a solid comeback effort for him despite a reduced walk rate.

Still, with plenty of options at the hot corner, the Mets let him walk and he inked a one-year, $5-million deal with Texas in January. The Rangers desperately needed more right-handed hitting and hoped that Frazier would help balance their lineup.

In his time with Texas his walk rate bounced back a smidge, but that was about the only good news as the rest of his game regressed, especially his pop, with a career-low .380 slugging percentage.

The Rangers, going nowhere fast this year, opted to move Frazier at the deadline, trading him back to the Mets of all teams. At this point, New York was adding him simply for bench depth and a righty that could man either corner infield slot if needed.

In his brief time with the Mets, Frazier’s offense regressed even further and he really didn’t put up enough counting cats to be Fantasy worthy. All told, it marked the worst season of his career, albeit it was only a 45-game body of work. But considering Frazier will be 35 in February, it doesn’t bode well for his future prospects (unless he plans on becoming a full-time knuckleballer — see video below).

Things may change as the offseason unfolds, but at this stage it’s more likely the Mets will buy him out for $1.5 million rather than pick up his $5.75 million option for 2021. Their infield is already a very busy place, and re-signing Frazier would only muddy that situation further.

It’s not fully clear what the future holds for Frazier, but we’ll give him this: the dude simply rocks Twitter, and apparently is not a fan of turkeys.

I have seen the reports about wild turkeys ?? in Toms River. They are a big problem here I. Toms River and the Toms River wildlife say they can’t move them. That’s ridiculous. They have come close to harming my family and friends, ruined my cars, trashed my yard and much more…

British reggae group Aswad has been churning out tunes since 1975. In 1989, its classic “Set Them Free” appeared on the fantastic Greenpeace Rainbow Warriors album. Here’s the band performing this song live in 1989 at the legendary Hammersmith Odeon in London.

By RotoRob
This entry was posted on Saturday, October 10th, 2020 at 11:13 am and is filed under BASEBALL, Player profile, RotoRob. You can follow any responses to this entry through the RSS 2.0 feed. Both comments and pings are currently closed.