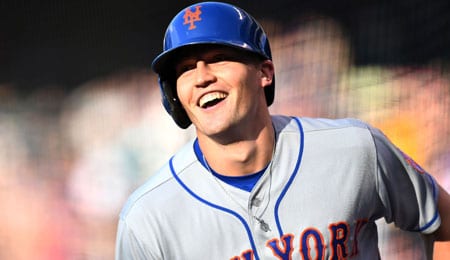 Brandon Nimmo has had little reason to smile early on, yet the Mets keep winning. (Ron Chenoy-USA Today Sports)

With three straight wins heading into action Saturday, they have now jumped a half-game ahead of the Phillies for first place in the NL East. New York has been buoyed by a superb 8-3 mark within the division.

What’s gone right for the Mets so far?

Brandon Nimmo had been struggling badly, so was moved from leadoff down to eighth in the batting order. So what happens? He immediately responds, going 3-for-4, with a double, a two-run homer (see video below) and two runs. Nimmo may not have been hitting very well (just .150 before this breakout game), but man, has he been piling up the runs, scoring in five straight (eight in total over that stretch). He’s 10th in the league in runs, so just imagine what happens when he starts getting on base at anywhere near last year’s pace.

Utility man Jeff McNeil has been a very pleasant surprise so far. He went 2-for-5 with a double, a run and two ribbies Friday, giving him a three-game hit streak to take his BA up to .359. McNeil had a very strong rookie season last year and seems to be proving that was no fluke as he mans third base for the injured Jed Lowrie to begin the season.

Speaking of Lowrie, he parlayed a career year in Oakland last season into a two-year deal from the Mets this winter, but will there be a job for him when he returns from a knee injury that has sidelined him so far this season?

At any rate, Lowrie will be heading out on rehab soon, and Todd Frazier (oblique), another missing bat that has yet to play this season, should be ready shortly as he’s currently rehabbing at Class-A.

And the team’s biggest acquisition this offseason — second baseman Robinson Cano — has struggled mightily (10-for-55).

Picking up the slack has been rookie first baseman Pete Alonso, who looks like a Triple Crown threat, ranking in the top five in BA (.370), homers (six) and RBI (17).

Now, before we get carried away, remember that the Mets got off to an 11-2 start last year only to go 66-83 from that point on, finishing fourth in the NL East.

Still, this team has an improved (if not great, at least better) bullpen thanks to the addition of closer Edwin Diaz. There’s more depth up and down the lineup, and that rotation (except for Jason Vargas, that is) is doing its thang, especially with Zack Wheeler looking more like himself Friday after a poor start to the season.

But right now, it’s all about the offense. Six straight games of at least six runs? Wow. That ties a franchise record.

A big part of that has been Michael Conforto. His power slippage last year was a big disappointment, but he is back in a big way, piling up the extra-base hits and hitting better than ever in what looks like it might be a serious breakout campaign.

If the Mets can upgrade their No. 5 starter and add another quality reliever, they could be a real surprise this season. Realistically, few expected the Mets to be any better this year, but now it looks like 80 wins or even a .500 finish is quite achievable — especially if they continue to do as well within the division.

Here’s another track off that fantastic 2006 compilation, All About Funk. This is from Ripple, a 1970s American funk band, with its biggest hit, “I Don’t Know What it is, But is Sure is Funky,” originally released in 1973.

Now it’s your turn. Let us know in the comments below how you think the Mets will do this season.

By RotoRob
Tags: New York Mets
This entry was posted on Sunday, April 14th, 2019 at 1:59 pm and is filed under BASEBALL, RotoRob, Team report. You can follow any responses to this entry through the RSS 2.0 feed. Both comments and pings are currently closed.