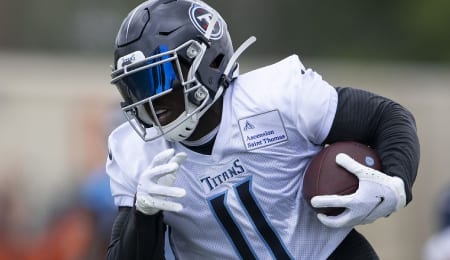 Welcome to our latest NFL Column, Worksheet, in which we deliver brief Fantasy previews of all the week’s games.

This year has been plagued by the brutal Covid-19 pandemic, but it exposed the complacency and mismanagement of players’ and coaches’ health and livelihood. Since Sunday, the league has swapped around several games in Week Six.

Here are the moves:

The Titans finally see the field after their numerous violations, albeit without their full roster. The one-win Texans now face their division rival. Masks on!

Love: A.J. Brown will see the field for the third time since Week One and is instantly a great contrarian play as Houston is ranked 19th in pass defense DVOA. Did you see what he did to Josh Norman this week (see video below)? Apparently, Brown barbecued Norman like he was a chicken.

Behind Lamar Jackson, the Ravens look to rally to their straight third win sporting their incredible defense. The injury-riddled Eagles, on the other hand, are looking to hang on.

Love: The Eagles defense does well limiting splash plays but gives up easy throws underneath. For that reason, Nick Boyle is in play.

The Falcons cleaned house, firing HC Dan Quinn and GM Thomas Dimitroff, and are left scrambling to find a new head coach. The Vikings narrowly lost to the Seahawks and look to rebound against a hollow team.

Love: Todd Gurley comes in as another interesting DFS option. The opposing run D is 24th in DVOA but limits big runs.

Hate: With how vulnerable the Vikings are on the perimeter, Hayden Hurst will be put on the shelf this week.

The Browns are averaging more than 35 points, but now the Juggernauts will face off with the league’s most unmovable object: the Pittsburgh Steelers in a divisional game.

Love: Eric Ebron is an attractive stream target against a Browns defense coughing up 33-308-4 to TEs, seventh most in the league.

Hate: Baker Mayfield and his receivers should be avoided. Odell Beckham Jr., Jarvis Landry and Austin Hooper have a date against the best-ranked pass defense in the league.

The Colts feature one of the NFL’s best young running backs in Jonathan Taylor to pair with their overperforming defense. Dusted by the Ravens, Cincinnati look to rally behind Joe Burrow and its high-paced offense.

Love: Capitalizing on the Bengals apparent run-funnel defense, Taylor is set to feast.

Love: Marvin Jones is set to obliterate the worst-ranked pass defense in the NFL, especially with Kenny Golladay back in the lineup.

Hate: Minshew has a decent matchup against a middling pass defense, but we expect James Robinson to carry the load.

The up and coming Bears, led by Big-Dick Nick Foles, have finally actualized the RPO offense. Carolina will be a tough test as it’s been a well-balanced team both on offense and defense.

Love: David Montgomery achieved a milestone in being targeted seven times last Thursday (after getting just nine targets total through the first four games). He will operate as the de facto bell cow.

QB Kyle Allen is expected to start on Sunday against an aggressive Giants defense that halted Dallas’ momentum. Meanwhile, struggling Giant QB Daniel Jones showed signs of life last week and will try to build on that.

Love: Washington RB Antonio Gibson offers the best option in a bad situation. Yes, he’ll be facing the NFL’s 11th-ranked run defense in DVOA, but he’s proven himself a dynamic back with increasing snap count.

Hate: The three-headed unit of Devonta Freeman, Wayne Gallman and Dion Lewis will face a defense ranked 18th in run defense DVOA. The matchup doesn’t scare us, but the dusty corpse of Freeman does.

Under the vigilance of Head Coach Bill Belichick, no new cases were found since Cam Newton and Stephon Gilmore have been put on the Covid-19 list. Expect New England to take its anger out on Drew Lock and the Broncos, a team it’s beaten five straight times (counting playoffs).

Love: Newton returns in a must-smash spot against a tough and balanced defense ranked ninth against the rush and 15th against the pass in DVOA.

Hate: Lock will see firsthand the ingenuity of Belichick and a rested Patriots pass defense.

The hottest team in the league faces Tom Brady and the Bucs in a “supposed” offensive showdown. Will it be fireworks, or duds?

Love: Robert Tonyan is an interesting DFS play as Tampa Bay has not been properly tested by a tight end yet.

Hate: Aaron Jones is likely to cede time to Jamaal Williams as Tampa Bay’s stout front warrants a heavier back. The likely return of Davante Adams will cut into Jones’ target share as well.

Fresh off a stunning upset over the 49ers, Miami now has the New York Jets on its platter. Freshly released Le’veon Bell will now depart for greener pastures as Head Coach Adam Gase wallows in his own pasture.

Love: Ryan Fitzpatrick and his ragged band of misfits will eat a demoralized Jets secondary ranked 22th in DVOA.

Love: Raheem Mostert returned to the fold and racked up 119 yards on 14 touches. Expect an increasing workload for him as the primary back in Kyle Shanahan‘s offense against McVay’s established run-funnel defense.

Hate: Cooper Kupp has been blocking a lot more in McVay’s newly designed system and isn’t seeing the targets he is used to.

Two of the pass-happiest teams go head-to-head as both quarterbacks looks to bounce back from previous losses.

Love: Devin Singletary is looking at a run defense that’s ranked 27th in DVOA, coughing up 129-632-3 while allowing 30 receptions for 281 yards.

Hate: Buffalo slot receivers Cole Beasley and Gabriel Davis will be hard-pressed against one of the best nickel/dime defenses in the league.

Love: Chase Edmonds is proving to be the better back and offer interesting flex appeal against a run defense equally as bad as the pass defense. Start Kenyan Drake at your own risk.

Hate: Michael Gallup was asked to run insanely long-developing routes and was volatile even with Prescott. Andy Dalton will not help.

Dennis Coffey is probably best known for his R&B and soul session work, but he had a nice run as a solo artist as well. His score for the blaxploitation film Black Belt Jones included “Super Slick,” featuring the Detroit Guitar Band.

By Lucas Chan
This entry was posted on Wednesday, October 14th, 2020 at 5:59 pm and is filed under FOOTBALL, Lucas Chan, Worksheet. You can follow any responses to this entry through the RSS 2.0 feed. Both comments and pings are currently closed.