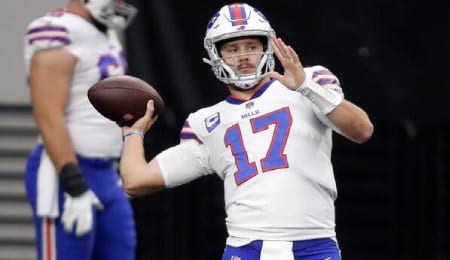 Josh Allen has been playing at an MVP level so far this season. (NYT)

In 2019, the Buffalo Bills enjoyed their finest season since 1999 despite ranking 26th in passing yards per game. So just how high can they finish this season with a pass attack that has soared from 201.8 yards to 316.3 yards per game (second in the NFL) this year?

Well, at 4-0 so far, this team looks safe to not only return to the playoffs, but may actually be poised break their streak of five straight one-and-done postseason showings since 1996. In Week Five, Buffalo faces the Covid-striken Tennessee Titans, and while it looks more promising that this game may happen, given the uncertainty, the betting line is still unknown. For what it’s worth, the Bills don’t seem particularly concerned about the situation (see video below).

When looking at a few USA options, we noticed that none of the ones listed have odds for this particular game. With just days remaining, they should pop up soon so keep that page bookmarked in case you want to browse through them to see which offers the best value. They are some of the most popular sites so they should be the fastest ones to get odds up.

As for the Bills and their improved passing attack, Josh Allen continues to be a huge early-season story with his improved play. Despite getting his shoulder banged up in Week Three, he still hurled two touchdown passes and rushed for another.

Heading into the season, we talked about how much we loved the Allen-Stefon Diggs stack, and that’s proved bang on. As much as Allen improved last year, he’s been that much better in 2020, completing nearly 70 per cent of his passes and putting himself on pace to top 5,000 yards passing. Not bad for a dude that barely cracked 3,000 for the first time last year.

Throw in his 12-to-1 touchdown to interception ratio, and Allen is making a case as the game’s most improved player and, if this pace continues, he could even work his way into the MVP debate.

As discussed, Allen and offseason acquisition Diggs have been phenomenal together; Diggs hauled in six passes for 115 yards in Week Three, putting him on pace to set a new career high in receptions and shatter his personal best in yards.

But it hasn’t been all about Diggs for Allen. In fact, the third-year QB has been spreading the ball to his entire receiving corps, hooking up with nine different pass catchers in Week Three.

And with their best start in a dozen years, the Bills are genuinely giving a reason to be Talking Proud in Buffalo.

English-American songwriter Lene Lovich got her start in 1975, and while she had a 15-year break in there, she’s still at it today. In 1979, she released her fourth single, “Say When.” The B-side from that was “One Lonely Heart,” which originally appeared on her 1978 album Stateless.

By RotoRob
This entry was posted on Thursday, October 8th, 2020 at 9:34 am and is filed under FOOTBALL, RotoRob, Team report. You can follow any responses to this entry through the RSS 2.0 feed. Both comments and pings are currently closed.