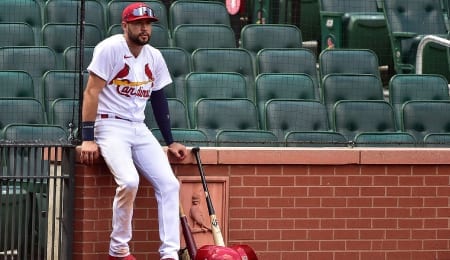 Welcome back to another week of Fantasy baseball. We’re into mid-August and pretty much a third of the way through this strange season already. Milk the wire, peeps!

This week, Ramon Laureano had his suspension cut from six to four games, because — let’s face it — he’s a hero for charging at the Astros; speaking of Houston, Yordan Alvarez is finally healthy and set to prove his NL ROY season last year was no fluke; and Zach Plesac says he and Mike Clevinger are not the villains they’re being portrayed as for putting their team at risk of Covid-19 by breaking team safety rules. Whatever you say, dude. Our call: If you’re placing any free bets on which will be the next team to be stricken with a Covid-19 outbreak, Cleveland looks like a great call.

Dylan Carlson, OF/1B, St. Louis Cardinals (ESPN: 21.5 per cent; CBS: 47 per cent): Well, the speculation over the last few days has proved correct as the top Cardinal prospect is in fact headed to the bigs, and scheduled to play Saturday when St. Louis is finally allowed to resume action. When we slotted Carlson No. 12 in our Top 95 Prospects, we said that he was oh so close to the bigs and could force his way into the NL ROY discussion. Well, that time has now arrived, and the kid will find himself sixth in the St. Louis batting order and manning one of the outfield spots. Need power? Carlson blasted a career-high 26 jacks last season (see video below to get a sense of his power), and he has the potential to be a great add for your team. A supplemental first rounder in 2016, this dude also has some great on-base skills, earning Texas League MVP honours last year — despite being the circuit’s second youngest player.

Angel Perdomo, SP, Milwaukee Brewers (ESPN: unowned; CBS: unowned): Perdomo is a virtual unknown on the Fantasy landscape, but the 26-year-old Dominican southpaw has just been recalled from the Brewers’ alternate training site. He’s a big dude who will be making his MLB debut, and he can bring some heat — enough that he struck out 107 batters in 69 1/3 IP between Double-A and Triple-A last year. Control is an issue, but that K rate has us a little curious.

Jose Iglesias, SS, Baltimore Orioles (ESPN: 4.7 per cent; CBS: 8 per cent): Signed this offseason, Iglesias is proving to be a very astute addition by the Orioles as he’s come out blazing. With another hit Friday, he’s now got a modest three-game streak, but his work over the first 50 at-bats — .380/.396/.540 — has been other worldly. While Iglesias opened some eyes with a four-hit, three-RBI game last week, he’s been consistently raking since the season began.

Alec Bohm, 3B, Philadelphia Phillies (ESPN: 15.9 per cent; CBS: 35 per cent): Another member of our 2020 Top Prospects class, Bohm was also recalled to the bigs to help spark some life in a flailing Phillie squad. Philadelphia’s top prospect has had a hit in each of his first two MLB games (a double in his debut and an RBI single in the second). The third overall pick in 2018, Bohm has developed into a top 30 prospect, and the early results suggest he can hit the ball hard — how about a 100.5 mph exit velocity? You need to grab Bohm while you can and hope that he can stick and provide some pop in addition to his BA and on-base skills.

David Bote, 3B/2B, Chicago Cubs (ESPN: 1.8 per cent; CBS: 3 per cent): With Kris Bryant (wrist/finger) hurting, Bote deserves a look as the main beneficiary of extra PT. Bote has never really done enough to earn Fantasy love yet, but he does have some hitting ability. The question with him is whether he’d get enough PT to add up the cumulative numbers we need to see; so now makes for a nice time to add him in NL-only leagues to see if his early season modest uptick in slugging can continue.

Rafael Montero, RP, Texas Rangers (ESPN: 44.8 per cent; CBS: 50 per cent): After flaming out as a starter with the Mets early in 2017, Montero was converted into a swingman and managed a career-best in wins. However, Tommy John surgery cost him all of 2018 and, after signing with the Rangers, he had to pitch in the minors before getting another shot in the bigs last year — strictly as a reliever now. The conversion to the pen went very well, and now this season Montero finds himself as the ninth-inning man in Texas, so he must be added immediately while it’s still feasible to land him.

Coney Hatch put out three albums in the ’80s before disappearing until 2013. A B-side from a single off its debut effort, here is “You Ain’t Got Me.”

By RotoRob
This entry was posted on Saturday, August 15th, 2020 at 11:12 am and is filed under BASEBALL, RotoRob, The Wire Troll. You can follow any responses to this entry through the RSS 2.0 feed. You can skip to the end and leave a response. Pinging is currently not allowed.