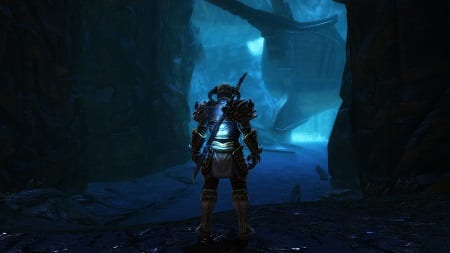 Ain’t that the guy from the Skyrim commercials?

Between the amount of reviews we wrote in conjunction with leisure time gaming (a pastime that has all but dissolved with additional kids), the number of games from the Xbox 360 and PlayStation 3 era that we were interested in but never played is very low. One such title, however, was Kingdoms of Amalur: Reckoning, a well-reviewed RPG that might be best known for the tragic tale of its developer, 38 Studios.

Now, eight-plus years after its initial release, publisher THQ Nordic has secured its rights and is bringing it to the Xbox One and PlayStation 4 crowd in the form of Kingdoms of Amalur: Re-Reckoning, which promises upgraded visuals along with some quality-of-life improvements. Given a second chance to play, we couldn’t pass it up.

There are several options at your fingertips in Amalur, but things are smartly laid out and the learning curve is mild. Offensively you’ll have access to things like melee attacks, ranged attacks and spells, while defensively blocking and dodging are both available. As with many RPGs you’ll be given a choice to function as a fighter, thief or mage, each of which has its own skill tree to unlock and enhance abilities.

All of it creates an action RPG feel to combat, which even now feels superior to what Bethesda has provided in its Elder Scrolls titles like Morrowind and Skyrim. That being said, we could easily rattle off a dozen or more RPGs that have launched since 2012 that provide tighter and more varied gameplay. Even though Amalur was new to us, it still felt dated. On that front, the inventory feels incredibly clunky, an issue that threatens to move beyond annoyance based on how much gear you collect and how often you’re forced to navigate its layers of menu screens.

If you concealed the actual systems, put the PS3 and PS4 versions on matching TVs and then asked us to identify which was the Re-Reckoning version, we might struggle to do so. The game looks every bit its eight years and arguably then some with muddy character models, clunky animation and a very last-gen feel. That it made the PS4 Pro sound like it was about to take flight, something usually reserved for the most technologically taxing of games, is a mystery for the ages. It feels like more port than remaster.

Things hold up markedly better on the audio side as both primary characters and trivial NPCs are voice acted with few cringe-worthy performances to be found. The clash of arms and casting of spells still hold up, and the soundtrack contains a suitably epic feel to accompany you on your lengthy journey.

In Kingdoms of Amalur you play as “The Fateless One,” a character of your choosing that is the first successful resurrection from the Well of Souls. The facility immediately comes under attack, forcing you to flee before learning anything about who you were and how you were brought back to life.

An early encounter with Agarth, a fateweaver who can see people’s future, reveals that you have no predetermined path. It’s a clever means of handing you a blank slate and turning you loose in the Faelands.

Once you’ve been unleashed there is no shortage of things you can do as Amalur contains a ton of content to tackle. In addition to a lengthy main story you’ll also be presented with loads of side stories, faction quests and other supplemental activities.

Two fairly meaty DLCs are included as well with The Legend of Dead Kel and Teeth of Naros adding new races and regions along with additional features. Even sticking with the main story pushed well past 30 hours, so those with the time and inclination could easily more than double (and perhaps triple) that.

In terms of world building, the game contains a copious amount of history and lore derived from creative director R.A. Salvatore, who has written a number of fantasy books. While at times the depth poured into the world is extremely impressive, the delivery system isn’t always the greatest with a crude Mass Effect-style interface leading to exposition dumps from various characters. As such it can feel like overkill, particularly during lengthier monologues.

When we mentioned quality-of-life improvements earlier, by far the biggest one is behind the scenes as the game recalculates things like enemy difficulty and quality of loot when you revisit areas later on. This is a welcome change as it keeps the challenge level up and allows you to collect usable loot rather than opening up chests full of gear that is completely useless to you at that point in the game.

If you’re looking for a game with a detailed history, solid gameplay and loads of content, Kingdoms of Amalur: Re-Reckoning could scratch that itch. That endorsement comes with some meaningful caveats, however, including badly outdated visuals and a clunky interface.

By HC Green
Tags: Kingdoms of Amalur: Re-Reckoning, Video Game Review
This entry was posted on Monday, September 21st, 2020 at 3:48 am and is filed under Herija Green, Video Game Reviews. You can follow any responses to this entry through the RSS 2.0 feed. Both comments and pings are currently closed.