Have We Seen the Best of Ender Inciarte? 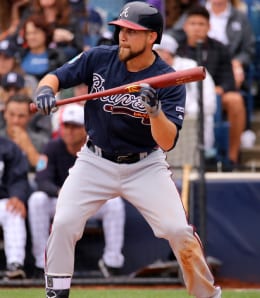 In our desperate need to immerse ourselves in sports, we were reviewing some San Diego Padres’ greats on Baseball-Reference the other day when we came across left fielder/first baseman Gene Richards.

Now, he only spent eight years in the bigs — seven with San Diego — but compiled a decent career, racking up over 1,000 knocks as a lifetime .290 hitter, almost 250 steals, a 739 career OPS and 18.7 WAR. What jumped out at us, though, was the fact that at age 26, the player most similar to Richards is current Braves centre fielder Ender Inciarte.

Of course, that got us thinking about Inciarte’s career path and his ultimate place in history, the topic of today’s post.

Of course the big question here is: can Inciarte stick around that long and be that effective, especially given some questions about his health (not to mention his long-term role) after 2019?

After a couple of solid seasons in Arizona, he was traded to Atlanta in the 2015 offseason in what turned out a steal of a deal for the Braves. In addition to Inciarte, they landed Dansby Swanson and Aaron Blair for Shelby Miller and Gabe Speier. Score for Atlanta.

After his first season in Hotlanta, Inciarte began making a name for himself as a Fantasy asset, earning an honourable mention on our coveted 2016 Wire Troll All-Star team after posting a career high in runs, triples, walks and OBP. It was clear the dude could swing the bat (especially in the virtual world; see video below).

He seemed poised for a breakout, and sure enough that’s what happened in 2017 when he set personal bests in games, at-bats, runs, hits (201), homers, RBI, walks, steals, BA (.304), slugging and OPS while matching his career high in doubles.

Unfortunately, Inciarte took a step back in 2018 from a slash line perspective (.265/.325/.380), although the news wasn’t all bad. He still set new career bests in RBI and steals while matching his high in walks.

Last year, Inciarte’s OPS bounced back, but injuries massively derailed his season. A lumber strain in mid-May cost him over two months, and less than a month after returned, he suffered a hamstring strain, and never made it back. Inciarte was on pace for a decent amount of runs and likely would have set a new career high in homers had he stayed healthy.

The uncertainty of a down year in 2018 and an injury ravaged 2019 — combined with a potential glut of outfielders in Atlanta — definitely raises questions about how much we can count on him in 2020.

For starters, the Braves are packed with outfield options. Beyond Inciarte, players also capable of playing centre include Ronald Acuna Jr. and Marcell Ozuna, with top prospects Cristian Pache and Drew Waters breathing down their backs. Other corner options include Adam Duvall, Nick Markakis, Austin Riley and Charlie Culberson. Did we mention it’s a crowded outfield?

Given that Inciarte is likely the starter in CF, with Acuna in right and Ozuna in left, when one of Duvall, Markakis, Riley or Culberson gets some OF time, it will likely be at Inciarte’s expense, with Acuna shifting over to CF. Things will get even more complicated once Pache and/or Waters arrives.

Assuming there’s around 450 plate appearances (based on a 100-game schedule) to play with here, how much action can we reasonably expect Inciarte to get (assuming he can stay healthy, that is)? Maybe 275 to 300 plate appearances?

Pache’s elite defensive skills may force Inciarte to the bench sooner rather than later (not that Inciarte isn’t a very strong gloveman himself), and that makes owning Inciarte a risky prospect. It’s not inconceivable that Pache forces his way to the Show within two months of the season getting underway, whenever that happens.

The way things look, Inciarte will barely be a top 100 Fantasy outfielder for 2020, so he’s not worth drafting and is best employed as an in-season waiver wire add should he establish a more consistent role. Once it’s clear that Pache proves he can provide more than Inciarte, the veteran’s PT will really plummet. Should he get moved, Inciarte may still bounce back and provide some great value, but it’s not likely in his current situation.

English rock band Bush got its start in 1992, took a break a decade later, then started back up again in 2010 and is still at it today. In 1994, the band’s debut album, Sixteen Stone, was released, and the third single from this effort was “Comedown.”

Now it’s your turn. Let us know in the comments below what you envision for Inciarte this season and going forward.

By RotoRob
Tags: Ender Inciarte
This entry was posted on Friday, May 8th, 2020 at 1:58 pm and is filed under BASEBALL, Player profile, RotoRob, Scouting Report. You can follow any responses to this entry through the RSS 2.0 feed. Both comments and pings are currently closed.