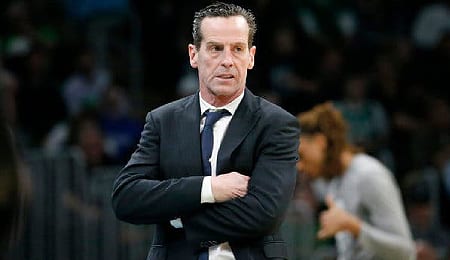 Kenny Atkinson’s firing was a bit of a surprise. (Schwalm/Associated Press)

Two months ago, we talked about the issues the Brooklyn Nets were having. At the time, they were riding a seven-game losing skid that had dropped the team to 16-20.

Well, this team has gone 14-14 since, and is now sitting at 30-34, good for seventh in the East (way behind sixth place Philly) but only a half-game up on Orlando, which is playing better lately. To give you a better look at how the team has progressed since the start of the season, we’ve included an image below of the team’s Eastern Conference odds. Sad to say that its odds have only been getting longer and longer (the Nets odds line is in black).

Brooklyn’s only saving grace is that none of the Eastern teams currently out of a playoff spot are playing well enough to be considered a threat.

Still, something had to give, so the team fired Head Coach Kenny Atkinson on Saturday, a sudden and somewhat surprising move. It was reported that he and the team “mutually agreed” to part ways (see video below). Um, sure they did.

The timing seemed off given that on Friday the Nets had beaten the Spurs rather convincingly. On Sunday, they won again, edging Chicago in a tight game.

Still, with reports that Atkinson had communication issues with his players and they were not responding to the offensive schemes he had in place, perhaps it’s not a surprise the Nets opted to head in a different direction. Rumours suggest that both Kevin Durant and Kyrie Irving played roles in Atkinson’s demise as well.

At any rate, Assistant Coach Jacque Vaughn has taken over as interim head coach for the remainder of the season, but he sure has his work cut out for him. On Tuesday, the Nets traveled to L.A. to face the Lakers, and as a 10-point underdog, an upset seemed highly unlikely. Yet Brooklyn scrapped its way to a 104-102 win as the coaching change has worked wonders — so far.

Going forward, the Nets have a lot to look forward to next season, when Durant and Irving are both expected to return from long-term injuries that have cost them most or (in KD’s case) all of this season.

Back in January, we talked about how valuable swingman Caris LeVert is to this team’s future success. He was rusty in returning from injury and didn’t get to the line as often as we’d like in January, but he sure turned things around since then. Last month, LeVert was jacking up way more long-distance shots, and so far in March, he’s been shooting the lights out from everywhere. His touches are way up this season, and it will be fascinating to see how big a part of the offense he remains once KD and Irving return to action. For now, consider LeVert a top 20 forward for the remainder of the season.

As we discussed last time we checked in on the Nets, PG Spencer Dinwiddie has really excelled in the starting role in Irving’s absence, and now that gig is secure for the remainder of the season. Dinwiddle actually saw a bit less PT in January as Irving returned, and while he was better last month, he’s been having trouble sinking his shot early in March. On Sunday, however, Dinwiddle went off for 24 points, so perhaps his shooting woes are behind him. The L.A. native was likely motivated to put on a show on Tuesday in front of family and friends, and sure enough, he poured in 23 points including a tie-breaking jump shot with less than 30 seconds to play to help secure the upset.

Canadian singer Burton Cummings spent a decade fronting The Guess Who, but found plenty of time for a solo career that is still going strong. In 1978, he released his third solo album, Dream of a Child, which spawned “Break it to them Gently,” a track that spent 10 weeks on the charts, reaching a high of No. 10.

Now it’s your turn. Let us know in the comments below what you think of Brooklyn’s move to axe Atkinson, and whether the Nets have a chance to make any noise in the playoffs (assuming they get there).

By RotoRob
This entry was posted on Thursday, March 12th, 2020 at 9:38 am and is filed under BASKETBALL, RotoRob, Team report. You can follow any responses to this entry through the RSS 2.0 feed. You can skip to the end and leave a response. Pinging is currently not allowed.