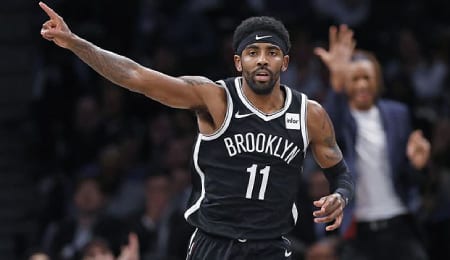 In case you hadn’t noticed, what was looking like a promising season for the Brooklyn Nets has gone south quickly, with the team dropping seven straight games.

Right now, the team simply looks like a poor bet.

Even the Nets’ upcoming game against Miami this Friday doesn’t seem to be favourable. Having gone through some of the NBA betting data on this page, odds for the game have been published and the Nets opened as 2-point underdogs. Odds aren’t horrible for Brooklyn but it hasn’t had the best luck lately.

Overall, this has been a middling team both offensively and defensively, and really the lone bright spot has been some superb work on the glass (the Nets rank second in rebounds per game), led by DeAndre Jordan (9.9 RPG).

One of the biggest issues facing the team is that its key offseason acquisition (other than Kevin Durant, who we all knew would miss this season) — Kyrie Irving — has been out since mid-November because of a shoulder impingement. He’s missed nearly a third of the season since (25 games), and still can’t lift his shoulder. Surgery remains a distinct possibility given that a recent cortisone shot simply hasn’t helped, but hey, at least his ego remains healthy (see video below).

Missing their two big guns, it’s looking more and more like this could be a lost season, with the Nets aiming to contend in 2020-21. Given that the team won 42 games last season — a 14-game improvement — this season’s spirals are all the more disappointing.

Tuesday was a perfect example. Brooklyn led by seven points with under 3:30 to play, and was right in the game against a hot Thunder squad, but the Nets’ offense stumbled down the stretch as they lost in overtime.

Power forward Taurean Prince has been a disappointment in his first season in Brooklyn, but he showed on Tuesday what he’s capable of, potting 21 points with eight boards, a block and a steal. He’s actually seeing a bit less PT this month, yet is performing better offensively. Overall, despite seeing more action than ever before, Prince’s offensively regression has continued this season. Two years ago, he looked like a budding scorer, averaging 14.1 points; he’s still trying to rediscover that form, but Tuesday was a step in the right direction.

If they are truly going to compete, the Nets need Prince — among other young players — to continue to develop as they wait for their superstars to get healthy.

Another of those youngsters Brooklyn desperately needs to step up is Caris LeVert, who — as we anticipated — returned to action on Saturday. He was a bit rusty in his first game back, but then went off for 20 points and six boards on Tuesday. LeVert has been canning more field goals this season as he continues to improve, and that’s huge given how vital he is to the team’s future.

With Irving out, PG Spencer Dinwiddie has generally been superb, sliding into a starting role and really running with it. However, he’s still prone to inconsistency as we saw on Tuesday, when he couldn’t get much done early in the game (missing his first seven shots) or down the stretch, finishing an ugly 6-for-21 for just 14 points. Foul trouble didn’t help matters, but that’s back-to-back poor shooting performances for Dinwiddie. His missed free throw late and missed jumper at the buzzer cost the Nets a win in regulation before they got smoked in OT.

While the D has been decent at times, the Nets really need to get their offense in order to get back on track this season.

Tuesday marked the opener of a stretch of seven of eight at home for Brooklyn, so if the Nets can take advantage of this favourable part of the schedule, they should be able to solidify their hold on the eight seed in the East, especially with none of the non-playoff teams looking like they are going to make a run at this point.

But if this losing continues — and with Miami up next, it’s quite possible this streak will continue into the weekend — there are going to be questions about where Brooklyn goes from here.

American rockers Styx started in 1972, and other than a six-year break in the second half of the ’80s, have been at it since. In 1978, the band released its eighth studio album, Pieces of Eight, and from this effort comes the instrumental “Aku Aku.”

Now it’s your turn. Let us know in the comments below how you think the rest of the season will go for the Brooklyn Nets.

By RotoRob
This entry was posted on Friday, January 10th, 2020 at 11:04 am and is filed under BASKETBALL, RotoRob, Team report. You can follow any responses to this entry through the RSS 2.0 feed. You can skip to the end and leave a response. Pinging is currently not allowed.