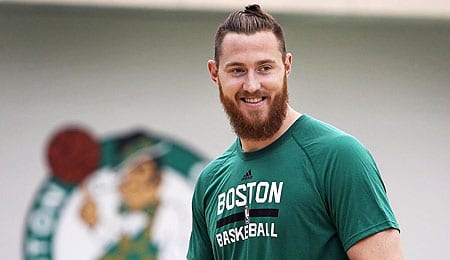 Aron Baynes has reason to smile in Boston. (SI.com)

Welcome back to another week of Fantasy basketball. We’re into November now, closing in on one-sixth of the season complete. Milk that wire, Fantasy hoops peeps!

This week, Lonzo Ball’s rookie season continues to have its ups and downs as now he’s dealing with the distraction of his kid brother’s arrest; Cleveland, which is already taking a hit when it comes to betting odds to win NBA Championship, is now without Derrick Rose (ankle); and Kevin Durant (thigh) was sidelined Wednesday, but was expected to return to action Saturday.

And now, let’s get to this week’s Fantasy basketball waiver wire picks, featuring a pair of players from the red hot Celtics, winners of 11 straight games…

Aron Baynes, C, Boston Celtics (ESPN: 4.9 per cent; CBS: 9 per cent): Baynes has played five NBA seasons in relative obscurity, but he showed what he’s capable of on Wednesday, starting for the currently concussed Al Horford. Baynes flashed a nice offensive touch, canning eight field goals on 12 tries en route to 21 points with eight boards and three assists in just 23 minutes. Deep league owners need to start paying attention as he’s played at least 21 minutes in three of the last five games. He’s not the best rebounder in the world relative to his size, but he’s known for his toughness. Last season, he didn’t dress in as many games for Detroit as the season before, but he’s getting more touches in Boston than he ever has. Just don’t expect any treys — he has exactly one in his career. Horford remained out on Friday, giving Baynes another start, but even after Baynes returns to the bench he can still be useful in deep formats. Baynes’ performance has not gone unnoticed by opposing coaches (see video below).

Terry Rozier, PG, Boston Celtics (ESPN: 22.1 per cent; CBS: 47 per cent): Rozier has already taken a much bigger role off the bench for the Celtics this season, but with Kyrie Irving getting knocked out of the game Friday with a suspected concussion, we got to see what Rozier could do in extended minutes. It was impressive. Rozier didn’t shoot well, yet still went off for 15 points with seven rebounds, four assists, two treys and two steals. Coming off a 14-point effort in the previous game, you can see that his scoring is starting to come around, making him a nice target. Always a bench player, Rozier could get a chance to start if Irving is sidelined, but even if he remains in the second unit, he’s sinking more buckets this season. We’d definitely like to see him improve his shooting touch before really investing heavily in him, but the fact that he has the flexibility to fit into different types of lineups that Coach Brad Stevens tries to employ should guarantee him decent PT.

By RotoRob
Tags: Aron Baynes, Boston Celtics, fantasy basketball, Lonzo Ball
This entry was posted on Saturday, November 11th, 2017 at 5:51 pm and is filed under BASKETBALL, RotoRob, The Wire Troll. You can follow any responses to this entry through the RSS 2.0 feed. Both comments and pings are currently closed.