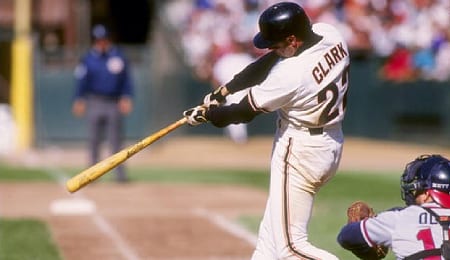 The Giants will retire Will Clark’s number next season. (Cooperstown Cred)

We haven’t had a chance to touch on the fact that next year the San Francisco Giants plan to retire No. 22 to honour former great Will Clark.

This will mark just the second time in franchise history that a player not enshrined in Cooperstown will earn this distinction, the first coming last year when the team recognized Barry Bonds.

Clark spent more time with the Giants (eight seasons) than any other team in his career, leaving San Francisco after the 1993 campaign. Since then, a whopping 21 players have donned No. 22 for San Francisco, including Eli Whiteside, Jake Peavy, Osvaldo Fernandez and Mike Matheny, all of whom wore it for multiple season.

A former Golden Spikes award winner as the top dog in college baseball, Clark was a hell of a player, but not Hall of Fame worthy, falling short on his first year on the ballot. The closest comparable player that made it in to the Hall is Edgar Martinez. Perhaps if Clark hadn’t dealt with elbow issues towards the end of his career, he may have enjoyed one or two more big seasons that could have helped his Cooperstown cause.

Will the Thrill had one of the sweetest swings (see video below) we’ve had the pleasure of watching over the years, and he certainly justified being taken second overall in the 1985 draft, definitely enjoying a better career than No. 1 overall pick B.J. Surhoff.

Rocker Amanda Marshall has only released three albums since starting her career in 1995. From her debut effort, this is “Dark Horse,” the fifth single the album produced.

Now it’s your turn. Let us know in the comments below what your favourite memory is of Will Clark.

By RotoRob
Tags: Will Clark
This entry was posted on Saturday, September 28th, 2019 at 4:21 pm and is filed under BASEBALL, MLB Today, RotoRob. You can follow any responses to this entry through the RSS 2.0 feed. Both comments and pings are currently closed.