What Happened to Jose Urena? 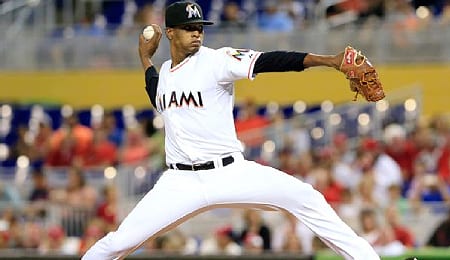 Jose Urena has gone from ace to reliever. (ESPN.com)

Just two years, Miami Marlins starting pitcher Jose Urena looked like an up and coming hurler. At the age of 25, he won 14 games while finishing 13th in NL in ERA and posted a respectable WHIP.

It certainly looked like the Dominican righty was maturing into a rotation mainstay for the Fish.

Last year was more of the same, despite weaker surface numbers in wins and ERA. Urena improved his strikeout rate and enjoyed the finest FIP of his career while taking a substantial step forward with his command. He did have to deal with a suspension for hitting Ronald Acuna (of course Acuna got his revenge — see video below), but the campaign showed promise nonetheless.

Urena was never going to be confused as an ace in the making, but he had the look of a somewhat useful Fantasy asset — especially in NL-only leagues.

This year, however, the wheels have come off for him. Not only has Urena’s record gotten even worse (4-10), but his ERA shot up well over a run, his hit rate rose to its highest level since he was a rookie, his K rate dropped and the walks were up. Yes, his FIP (4.71) suggests he deserves slightly better results, but even so, it’s been a majorly disappointing season for him.

And with plenty of pitching prospects on the way for Miami, Urena’s rotation spot is no longer guaranteed. In fact, after injuring his back in June and not resurfacing until rosters expanded, he has pitched solely out of the bullpen.

That’s got to be a tough pill to swallow for the team’s Opening Day starter the last two years.

Still, Urena must have looked better pitching out of the pen, right?

Having just turned 28 a couple of weeks ago, is Urena already done as a big leaguer?

Well, the fact that one of his closest career comparables as per Baseball-Reference is William VanLandingham does not bode well. Remember him? A fifth round pick by the Giants in 1991, VanLandingham burst onto the scene as a rookie in 1994, going 8-2 with a 3.54 ERA. His FIP just kept rising year by year until the Giants released him in 1997. VanLandingham never resurfaced in the bigs.

Hell, the dude isn’t even a reliable relief pitcher for Fantasy purposes, barely making it into the top 400 at his position.

Still, it’s interesting to note that Urena tossed quality outings in eight of his 13 starts this year. So when he was off, he was really off, suggesting this simply could be a matter of consistency.

However, it’s debatable how many more chances he’s going to get to find consistency in his game given how he’s already being passed on the depth chart.

Urena can look very good at times, but just as quickly unravel. If he doesn’t figure it out very soon, it’s his career that will unravel.

The Jayhawks emerged from the Twin Cities scene in the mid-’80s that is considered the peak of Minnesota music history (producing The Replacements, Husker Du and Collective Soul, among others). Here’s another track from Tomorrow the Green Grass, an album that reached 92 on the Billboard 200 chart. This is “Nothing Left to Borrow.”

Now it’s your turn. Let us know in the comments below what you’re expecting out of Jose Urena next season.

By RotoRob
This entry was posted on Tuesday, September 24th, 2019 at 3:45 pm and is filed under BASEBALL, Player profile, RotoRob. You can follow any responses to this entry through the RSS 2.0 feed. You can skip to the end and leave a response. Pinging is currently not allowed.