The Disintegration of Matt Moore 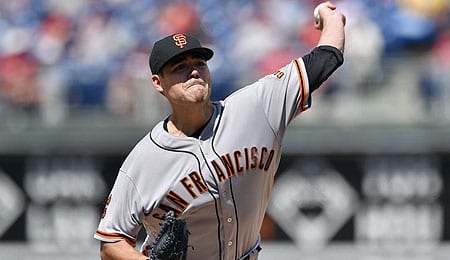 Matt Moore seemed to revitalize his career after getting dealt to the Giants at last year’s trade deadline (even narrowly missing a no-no in late August), so was considered by many to be a bit of a sleeper heading into this season.

After all, just a few years ago, he was a rising star with the Rays before injuries struck, and a move to pitching friendly AT&T couldn’t hurt, right?

But this season has been an absolute shit show, and the Giants were talking about skipping his spot in the rotation.

Moore was shelled again on Monday by the Cubs, and other than a nice five-start stretch in May, he’s been rancid all year long, and pretty much a very tough Fantasy play in anything but an NL-only format.

His velocity is down on all his pitches, and while he’s gone to the cutter more than ever, the results have been awful. Moore’s fastball has been especially ineffective this season.

The real issue here is we’re talking about a left-handed starter that can’t get lefties out this season; they are punishing him to the tune of a .396 BA. Seriously? Tampa Bay’s eighth round pick from 2007 has sure seen his promising career disintegrate, leaving his former Fantasy owners scrambling for solutions.

Moore’s next start is supposed to be Sunday in Washington, but Manager Bruce Bochy (see video below) admitted that skipping that outing was on the table: “I think you have to think about it and we have,” Bochy said. “You’d be crazy not to see if it helps.”

Moore has now surrendered at least four runs in each of his last six starts, so small wonder the Giants’ brain trust is thinking about giving him some down time. After Moore spoke to Bochy, the team has now opted to let the southpaw make his start Sunday, but you’ve got to figure the leash will be short.

Let’s examine what went wrong with Moore this season.

For starters, his control has regressed. After showing signs of improved control in 2015 and 2016, he’s back up to 3.5 walks per nine, which is still under his career average, but not good. Moore has never been more prone to the long ball, and more walks + more homers allowed is always a deadly combination for a pitcher.

Is there some bad luck involved here? Yes, to an extent. His BABIP has never been higher and his strand rate is by far a career low. This is reflected in an FIP over a run below his ERA and an xFIP over eight-tenths of a run lower. But even those numbers (4.69 and 5.07) don’t paint a picture of a good starter. Not even close.

His hit rates have regressed and he already has nearly double the wild pitches he had last year — in nearly 70 fewer innings pitched.

As mentioned, Moore’s fastball velocity is down, and he’s going to the pitch less often than ever before, using his secondary offerings much more, especially the changeup and cutter.

It behoves the Giants to do everything in their power to help Moore right the ship down the stretch. Still just 28, it’s hard to believe he’s incapable of bouncing back, if not to his 2012-13 form, then perhaps to the second half of 2016, when he was at least a serviceable starter.

Mechanical issues and command have been his bugaboos, and if this team can fix those issues, he still has the arsenal to be a very good starting pitcher and a real Fantasy asset.

The carrot is there: the team holds a $9 million option on Moore for 2018, and if he can show something down the stretch, they are likely to exercise that deal.

For Fantasy purposes, we recommend steering clear of him, unless he has a favourable matchup at home (where he’s been much better — 4.83 ERA vs. 7.23 on the road). If Moore can string together a run resembling what he did in May, grab him; otherwise, he’ll simply be a late-round flier option or in-season waiver wire add in 2018.

Now it’s your turn. Let us know in the comments below how you expect Moore to do down the stretch.

By RotoRob
Tags: Matt Moore, San Francisco Giants
This entry was posted on Wednesday, August 9th, 2017 at 1:30 pm and is filed under BASEBALL, Player profile, RotoRob, Scouting Report. You can follow any responses to this entry through the RSS 2.0 feed. Both comments and pings are currently closed.