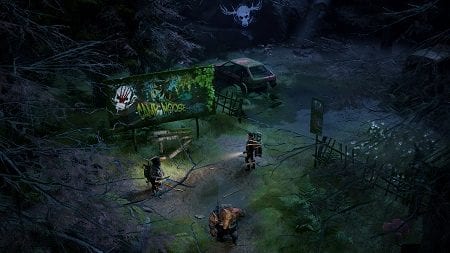 Originally released on PlayStation 4, Xbox One and Steam last December, Mutant Year Zero: Road to Eden from developer The Bearded Ladies has made its way to Nintendo Switch. Its tactical, turn-based combat immediately conjured memories of XCOM, a longtime favourite of ours. Does it live up to its inspiration? There’s only one way to find out.

Mutant Year Zero offers a smart, intuitive setup that handles well whether docked or playing it as a handheld. You move freely during exploration and then toggle into turn-based action once combat is initiated. Each turn affords several options, such as moving, entering cover, attacking an enemy or fortifying your position. Some actions cost a single action point, like reloading your weapon, while others end your turn immediately (attacking).

You don’t need to work hard to see XCOM‘s influence here, and the results are very good. We felt comfortable almost immediately, and the game does a solid job of introducing new wrinkles, such as mutant abilities, as you progress. While there’s no option to undo a misstep, the game allows you to save at any point, so as long as you’re diligent with that you shouldn’t lose any meaningful progression. Defeats were rare once we got the hang of things, so if you’re well-seasoned in the genre you might want to crank up the difficulty.

When in standard gameplay, Mutant Year Zero has a charming look to it with lots of little details hinting at the fall of civilization (decaying buildings being reclaimed by nature, rusted technology, abandoned emergency response vehicles and so on). Enemy design and variety aren’t great, but they’re at least adequate. When the game zooms in for a cut scene or the like, the cracks are evident. Those moments are few and far between, though, so it’s a minor issue.

There isn’t a ton of dialogue, but what’s here is presented capably with good performances from your team as well as the exposition-heavy Elder, who primarily exists to explain the world. Weapon effects and music are solid, too.

Following a global pandemic and nuclear war, humanity is on the brink of extinction with the Ark serving as the last known settlement. Radioactive fallout has ostensibly caused mutations, resulting in strange appearances and abilities. The leader of the Ark, known as The Elder, sends mutants designated as “stalkers” into the surrounding wastelands to gather up supplies. It’s dangerous work, though, as the area is populated by murderous “ghouls,” surviving humans that have gone mad.

As stalkers Bormin (a mutant boar) and Dux (a duck), you are dispatched by the Elder to track down the most legendary of stalkers, Hammon, whose technological acumen is needed to keep the Ark running. The duo soon encounters a third stalker, Selma, who was part of Hammon’s team and is able to help shed some light on his whereabouts. Now the group must move deeper into the zone to find Hammon while piecing together more details about what befell the world.

There isn’t a ton of exposition, but the story is still relatively engaging — something that is helped by the world’s detail level and in-game conversations between the characters. While the game does offer up some optional paths, encounters are finite, which helps keep the story focused. We chose to explore every area and take on every foe, leading to a very strong group for the final push, giving us a completion time of around 20 hours.

Outside of the very earliest moments you’ll always control a three-person team, and you’re free to swap them out at your leisure as long as you’re not actively in combat. Experience is distributed equally to all characters, whether they’re in the party or not, allowing everyone to stay viable regardless of usage. XP unlocks ability points that can be used to bulk up permanent buffs, like more health or greater movement, as well as passive and active mutations, such as ignoring height or firing two shots at once.

Exploration will also net resources that can be used back at the Ark. There are two types, one of which is used as currency to buy items (health packs, grenades), guns or armour, while the other is needed to level up existing weapons, providing extended range, more damage and so on. It’s an efficient system, one that rewards those willing to comb each area looking for goodies. The inability to sell unwanted items and old armour seems like an oversight, though — guns can be broken down into materials.

Turn-based combat is engaging but could’ve benefited from more variety as we found ourselves using the same tactics over and over again with few exceptions: isolate patrolling enemies, kill them with silent weapons to avoid alerting the larger group and whittle down numbers until we could take them down with relative ease. The few times battles sprawled and enemies kept pouring in were the times our strategic thinking had to come into play.

If you enjoy turn-based combat games, Mutant Year Zero: Road to Eden is a damn good one. While we would’ve welcomed more wrinkles in enemy encounters, we still enjoyed the ride immensely and wished there was more when it ended.

By HC Green
Tags: Mutant Year Zero: Road to Eden, Video Game Review, XCOM
This entry was posted on Thursday, August 15th, 2019 at 7:16 pm and is filed under Herija Green, Video Game Reviews. You can follow any responses to this entry through the RSS 2.0 feed. You can leave a response, or trackback from your own site.