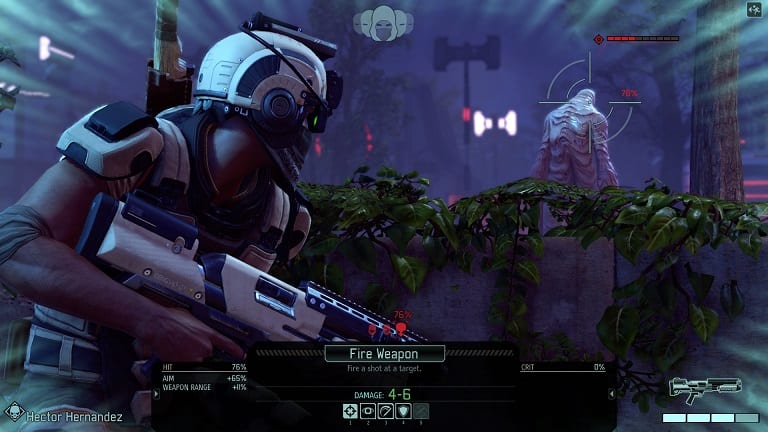 After having a serious conflict with a super-aggressive alien race in the last XCOM, the sequel starts off with the forces of Earth technically having lost the first battle. In XCOM 2, it’s a fight for survival, as you guide your forces around the world knocking down alien black sites and rescuing specialists that can aid the fight.

Do you honestly think you have what it takes to save Earth? Because if you do, we could really use your help, Commander.

Actually playing XCOM 2 is incredibly easy. When looking down on the battlefield, you’ll use the left stick to highlight a position you’d like a soldier to move to while using the “X” button to confirm and execute the order. Other buttons generally have multiple functions depending on what you’re currently doing.

For example, in case there are enemies nearby, pulling R2 puts your chosen soldier into a targeting mode in which you can fire on your enemy. The shoulders cycle through available targets, or if you’re not actively targeting an enemy they’ll cycle through your soldiers’ other abilities like healing a friendly or providing cover fire.

As it’s a turn-based game, there’s a lot of time to familiarize yourself with each function available to you, but sometimes that familiarization period can come with a severe price.

Like most other games in the series, XCOM 2 is played from a top-down isometric perspective. You can rotate the camera, but it doesn’t quite feel like you can zoom far enough sometimes. Lighting effects and shadows are certainly a cut above the previous game — in fact, during missions that take place at sunrise or sunset, the shadows can really hide enemies so you’ll have to remain observant.

Animation sets for the aliens and Earth’s soldiers are pretty lively and well done, but there are some issues with the graphics department. First, sometimes the frame rate can just die during the beginning of a mission and some textures (like the Faceless’ transformation) are just flat out gone or in a constant state of phasing in and out.

Speaking of the textures, in general they’re extremely well done and pack a surprising amount of detail. The same goes for the special effects like Psi explosions or poisonous clouds looming around.

Voice work is absolutely great, and the soundtrack does a wonderful job embedding a sense of urgency and importance in your activities. Explosions, gunshots and sword slices all sound nice and goopy as though an alien really did just bleed out right in front of you, which is something we never knew we’d really enjoy so much.

XCOM 2 is a game about saving the Earth no matter the cost. Once you start you’ll find your ship in a random sector on the globe. For example, our first play started off in East Asia, and we were tasked with making contact with some of the Middle Eastern Territories and Indonesia.

As you guide your ship around the map, you will have an intense number of choices to consider. While there might be a sweet load of Intel waiting to be snatched up in France, there also might be a priority target all the way across the sea in America.

Choices like these will determine whether or not your playthrough is going to be difficult or extremely difficult. It might be easier and safer to do a simple VIP extraction, but in the long run maybe you should have considered using your resources for rescuing a group of scientists to expedite your research projects.

Make no mistake though, XCOM 2 is never easy. Not even for a second. If you are going through a particularly rough scuffle and end up getting your soldiers injured, it’ll take several in-game days for them to heal up.

That means if you are presented with a priority mission during this period then you’ll likely be sending off a group of inexperienced rookies, and there’s a great chance few of them will make it back. Death is permanent in XCOM 2, although you can save characters to the Character Pool in order to re-recruit them in case they perish (but that’s for scaredy-cat losers that can’t handle the harsh realities of life and death).

In between battles and boxes of tissue consumed for the fallen soldiers, you’ll be constantly researching new technologies from scraps you’ve picked up from the field while also building facilities inside of your ship in order to better equip your team.

For example, building a Guerrilla Ops centre is the only way to increase your squad size from four to eventually six. Picking up loot dropped by enemies and deploying it in the research and production of new weaponry is of the utmost importance as well, because it doesn’t take long for the enemies to pretty much not be affected by your puny bullet throwers.

What can we say? XCOM 2 is a wonderful sequel to a wonderful game, it just has a few issues with graphics and some instances in which the game will hang for a few minutes in-between turns, but nothing should stop you from playing this — unless you’re deathly scared of responsibility, aliens or difficult learning experiences.

By Jeff Cater
Tags: 2k Games, Video Game Review, XCOM 2
This entry was posted on Saturday, October 22nd, 2016 at 7:47 pm and is filed under Jeff Cater, Video Game Reviews. You can follow any responses to this entry through the RSS 2.0 feed. You can skip to the end and leave a response. Pinging is currently not allowed.