Video Game Review: The Church in the Darkness 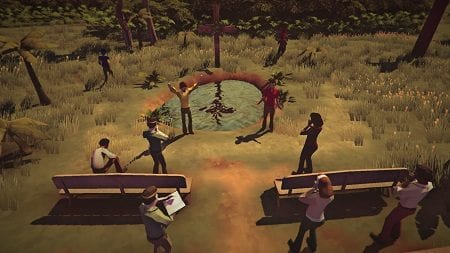 Infiltrating is an undeniably cool concept.

Cults, jungles and a top-down perspective were all we needed to see to drum up substantial interest in The Church in the Darkness, which recently released across all three major platforms and PC. With the promise of dark subject matter and stealth-based gameplay ahead we set off to Freedom Town via the Nintendo Switch.

Structurally, everything does the job, allowing you to sneak, sprint, distract, shoot and more in an effort to infiltrate the compound and locate your target. It never feels all that responsive, though, particularly aiming your gun. An auto-lock function helps a great deal in this respect, but when you’re under pressure (read: being shot at) it’s pretty dicey — in a way the game compensates for this by making fleeing overly effective, though that isn’t the most compelling approach.

You needn’t squint very hard to see the Metal Gear Solid influence at work. When sneaking around, enemy vision cones will appear, showing you where you need to step to avoid detection. After taking down enemies you can stash their bodies inside various sheds and cabinets in hopes of keeping your presence in the community a secret. These things function decently, but there’s no juice to the action, and it quickly felt like going through the motions rather than a taut thriller.

There’s some simplistic charm to the overall aesthetic, but it runs into problems whether docked or as a handheld. With the former, the larger screen makes the lack of detail stand out, particularly with the character models. For the latter it can become difficult to make things out, and we had far more trouble getting spotted by guards and citizens simply because we didn’t notice they were even there. It’s a disappointing mix.

It’s a better showing on the audio side with well-written dialogue and capable performances from the cult leaders. The weakness is that they tend to repeat what they’re saying a lot, particularly once they’re aware that someone has infiltrated the compound — we lost count of how many times we heard “they’re killing us” across our playthroughs.

Set in the 1970s, the game has you play as Vic, a former law enforcement officer that has arrived at the South American camp in search of his nephew Alex, who hasn’t been heard from recently. Dubbed Freedom Town, it’s the headquarters of the Collective Justice Mission led by husband and wife Isaac and Rebecca Walker. It’s a cool setup that draws heavy inspiration from the real-life events of Jim Jones and the mass suicide at Jonestown.

Unfortunately, the stealth-action gameplay loop can’t match the concept. Rather than a story with checkpoints and incentive to explore, The Church in the Darkness plays as a rougelite in which each trip presents different variables, altering the Walker’s motivations, your insertion point, potential point(s) of contact and side missions, Alex’s location (and attitude) and so on.

On the surface that sounds like a fair amount of change, but in practice the runs quickly start to blend together, and only Alex’s view of the cult has any meaningful impact from one run to the next. Making matters worse is that the payoff is simply a bit of text, and then you can check off one of the possible endings. It’s a pretty anticlimactic way to wrap up a game in which the replay incentive is based almost entirely on seeing more endings.

Minus the inevitable missteps and return trips, the game is extremely short, and once you get a feel for it you can beat it in less than an hour. There are ways to extend things, such as taking on side missions for other citizens of Freedom Town, and the game lets you customize your loadout before each trip, but all of these changes feel more like minor tweaks as opposed to game-altering reasons to keep going back.

It’s unfortunate because you can see the potential here, simmering just beneath the surface, as this interesting world could be better fleshed out and paired with gameplay more conducive to a winding narrative. Instead, most of your time is spent running around, just ahead of the vision cones, until the repetition makes chasing additional endings feel like more effort than its worth.

The Church in the Darkness has a setting and a plot that could anchor a strong game, but the repetitive rogue-lite gameplay is a poor fit and leaves much of that potential unrealized.

By HC Green
Tags: PC, The Church in the Darkness, Video Game Review
This entry was posted on Monday, August 12th, 2019 at 8:50 pm and is filed under Herija Green, Video Game Reviews. You can follow any responses to this entry through the RSS 2.0 feed. Both comments and pings are currently closed.