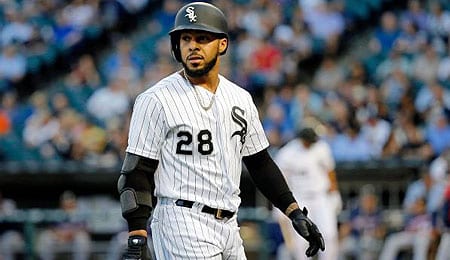 Welcome back to another week of Fantasy baseball. As the Red Sox and Yankees square off in Jolly old England, it’s time to take another dip into the waiver wire.

This week, Houston led the way with three starters on the All-Star team; Mike Trout once again turned down an invite to participate in the Home Run Derby; and Craig Kimbrel nailed down the save in his first appearance with the Cubs.

Leury Garcia, OF, Chicago White Sox (ESPN: 7.2 per cent; CBS: 23 per cent): With Tim Anderson (ankle) landing on the IL, Garcia has shifted in to take over shortstop, his original position when he was a prospect in the Texas system. Garcia has never really been known for his power, yet with five jacks he’s already surpassed last year’s season total. More importantly, he’s hit safely in 10 of his last 11 games, with five hits (two doubles) and two runs over the last two games. Garcia has been surprisingly effective this season, batting .295 in April, .319 in May and recording a season-best 755 OPS so far in June. Finally seeing full-time action, he’s responded with the best hitting performance of his career — especially impressive after last season injuries limited his counting cats. After spending his most of his career bouncing back and forth between Triple-A and the bigs, Garcia settled in as a utility man in 2017, and is now showing he’s capable of being a decent full-timer. Hell, he’s even been responsible for periodic fireworks (see video below).

Clint Frazier, OF, New York Yankees (ESPN: 11.9 per cent; CBS: 42 per cent): Giancarlo Stanton is back on IL, probably until August, and while the Yanks didn’t use the opportunity to recall Frazier, you have to figure the kid is going to get another shot soon. Since his demotion to Triple-A a couple of weeks ago, Frazier has hit poorly, but judging by his work last year, he’s mastered the level, and will soon mash enough to force the Yanks’ hands. And remember that he was actually hitting very well before getting sent down (.320/.375/.480 in June), only losing his job because the Yanks acquired Edwin Encarnacion. To his credit, Frazier took the demotion in stride.

Cy Sneed, SP/RP, Houston Astros (ESPN: unowned; CBS: unowned): Sneed was brought up to bigs to make his MLB debut this week, and while it wasn’t a gem, it wasn’t awful. Besides, how can you ignore a pitcher named Cy? The former Idaho high school star (he was the state’s Gatorade Player of the Year in 2011) certainly gave a tired bullpen a shot in the arm with his showing. Sneed, 26, was a third round pick by Milwaukee in 2014 and traded to Houston in 2015 straight up for Jonathan Villar. Watch Sneed in very deep NL-only leagues.

Brendan McKay, 1B/SP, Tampa Bay Rays (ESPN: 15 per cent; CBS: 50 per cent): Tampa Bay’s answer to Shohei Ohtani, two-way star McKay has been recalled to make his MLB debut of at least two starts, possibly more. Considered by some as a top 15 prospect heading into this season, McKay will start against the Rangers on Saturday. He’s been lights out on the mound this season, undefeated through 11 starts and a couple of relief outings between Double-A and Triple-A. Even McKay’s hitting has picked up since being promoted to Triple-A just over a month ago.

Luis Urias, 2B, San Diego Padres (ESPN: 6 per cent; CBS: 40 per cent): Urias struggled to hit with any pop to begin the season, getting sent back to Triple-A in late-April. All he’s done since is be very productive with a .324 BA; there’s serious BA upside here, so stash this kid.

Scott Oberg, RP, Colorado Rockies (ESPN: 5.8 per cent; CBS: 21 per cent): Wade Davis has not been the same since returning from injury, and if he’s removed as closer as Colorado is apparently considering, Oberg will likely be the man.

Addison Russell, SS/2B, Chicago Cubs (ESPN: 1.9 per cent; CBS: 11 per cent): Russell has looked very droppable as a Fantasy asset for a couple of years now, but he’s starting to see more PT and is 4-for-9 over the last three. If he keeps starting, he’ll be worth owning.

Danny Duffy, SP, Kansas City Royals (ESPN: 7.4 per cent; CBS: 31 per cent): Duffy has looked good in three of his last four starts, and his command was superb on Friday as he tossed five scoreless frames before running into trouble. There’s potential DFS value here based on matchups.

Jose Rondon, SS/2B, Chicago White Sox (ESPN: 0.1 per cent; CBS: 1 per cent): Rondon is worth a look now that Yonder Alonso has been DFAed. Rondon got off to a great start before struggling, but he’s being given a look by the Sox right now, which at the very least makes him worth watching.

Mark Melancon, RP, San Francisco Giants (ESPN: 0.8 per cent; CBS: 3 per cent): Remember when the Giants signed him to that ridiculous contract two and a half years ago? Well, Melancon is still the highest paid reliever, and he could be worth stashing assuming Will Smith gets traded at the deadline.

Jake Cave, OF, Minnesota Twins (ESPN: 0.1 per cent; CBS: 1 per cent): The Twins’ fourth outfielder is seeing action now with Byron Buxton, Marwin Gonzalez and Eddie Rosario all out. Cave has some modest speed, but we haven’t seen it in the bigs yet. For now, watch him to see if he can take advantage of the extra reps.

Funk superstars Parliament, formed in New Jersey in the late-’60s, and through several extended breaks, was still active up to last year. The classic “P. Funk (I Want to Get Funked Up,” appeared on the compilation All About Funk, but was originally released on 1975’s Mothership Connection, and was later sampled by Dr. Dre.

By RotoRob
Tags: Leury Garcia
This entry was posted on Saturday, June 29th, 2019 at 1:52 pm and is filed under BASEBALL, RotoRob, The Wire Troll. You can follow any responses to this entry through the RSS 2.0 feed. Both comments and pings are currently closed.