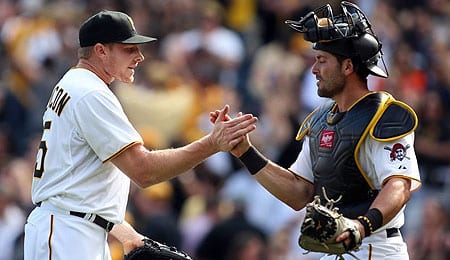 The San Francisco Giants came away from the Winter Meetings having shored up a weak spot in 2016 — the back end of their bullpen.

By signing Mark Melancon to a four-year, $62-million deal — the largest ever given to a reliever (for about five seconds, until Aroldis Chapman’s deal) — the Giants have solved an issue that really cost them this year as they blew 30 saves and nine times lost a lead in the ninth inning.

In recent seasons, Santiago Casilla and Sergio Romo seemed to have taken turns as the closer in San Francisco, and while Casilla held the post nearly all of last season, he suffered his most losses since 2012 and had his highest ERA since 2009.

Hunter Strickland had long been considered the closer of the future in San Francisco, but he really struggled when given a chance to earn saves, and he was easier to hit last year than ever before.

So enter Melancon, who — unlike Chapman — was willing to pitch in California despite its tax laws. This year, Melancon ranked second in the NL in saves, and the thing we love about him is he’s a rare closer that’s capable of working as many games as a top setup man. He’s been a durable workhorse that simply doesn’t need to blow away hitters to be successful. No, Melancon will not rack up elite strikeout numbers, but when factoring in his saves, ERA and WHIP, you’re talking about a consistent top notch Fantasy asset, and one capable of helping himself defensively (see video below).

Now it’s your turn. Let us know in the comments below whether you think adding Melancon puts the Giants over the top in the NL West.

By RotoRob
Tags: MLB, San Francisco Giants
This entry was posted on Friday, December 9th, 2016 at 12:42 am and is filed under BASEBALL, MLB Today, RotoRob. You can follow any responses to this entry through the RSS 2.0 feed. Both comments and pings are currently closed.